The senior duo is back in College Park for one last go-around together.

Share All sharing options for: Malikae and Mikayla Dayes are the ultimate package deal for Maryland women’s soccer

Although Maryland women’s soccer players Mikayla and Malikae Dayes enjoyed the home-cooked meals, the lively workouts with their mother and spending time with their new baby brother on their dad’s side during their time spent back in Brampton, Ontario, during the start of the coronavirus pandemic, the identical twins knew they wanted to come back for their senior year.

However, the decision to return to College Park required several moving pieces. Their mother, Georgette Williams, a registered nurse who has experience with coronavirus patients, was extremely hesitant at first. To feel comfortable, she wanted the rules she put into place to keep her family safe while Mikayla and Malikae were at home, to continue at school.

“Here it is Fort Knox and they have to carry whatever they are taught here. Your hands sanitized, have your mask on, have your gloves on if you’re going to certain places,” Georgette said. “You cannot go upstairs and jump in your bed if you’re going outside mixing with other people. There were rules in this house that were so stringent.”

Women’s soccer head coach, Ray Leone said the Dayes sisters are the kind of people who are always doing the right thing, and that’s one of the reasons Williams felt comfortable sending them back to the United States from Canada during the pandemic.

The combination of her trust in the girls, as well as the conversations she had with their teammates’ parents and Leone, made Georgette feel safe sending the twins back to school. Their father, Humphrey Dayes, agreed that they were going to need to continue their responsible practices. So, the twins made their promise to stay safe and returned to Maryland for the start of school.

Mikayla and Malikae have made double the impact on the team as a package deal.

The girls, referred to as Kayla and Milli, respectively, by their friends and family, joined the program in Leone’s second year at the helm.

Last season, Maryland recorded nine wins, the most since 2013. Before 2019, the team hadn’t won more than two conference games in any of Leone’s prior years. Last year they won five, enough to take them the Big Ten tournament for the first time in program history, much in part behind the leadership of the duo.

“I am the most pleased that they’ve come to another country and they made this their part-time home.”

Malikae, a defender, played a team-high 1,861 total minutes and made the Big Ten All Tournament Team, while Mikayla, a forward, had a team high of three game-winning goals and was second on the team in points with 11. Combined, they’ve started in 66 games over the last two seasons.

But coming to Maryland was just the next step in the twins’ journey as teammates. The two played together on their high school team and for the Toronto Blizzard, a club team aimed at helping young talent receive scholarships for soccer.

“We really wanted to go to school together. We didn’t want to go to separately. I just cannot see myself going to another school and I don’t know if that’s corny but…” Mikayla told Testudo Times as she trailed off laughing with Malikae.

Growing up in Brampton, Ontario, the Dayes sisters attended annual family barbecues where one of their friends who was a few years older would kick around the soccer ball. Their parents noticed Mikayla and Malikae were drawn to the sport and when they were about five years old, and registered them for soccer.

“In high school we tried other sports like track and flag football. Those were fun but we started to really like soccer a lot, so that’s why we continued with that,” Malikae said. 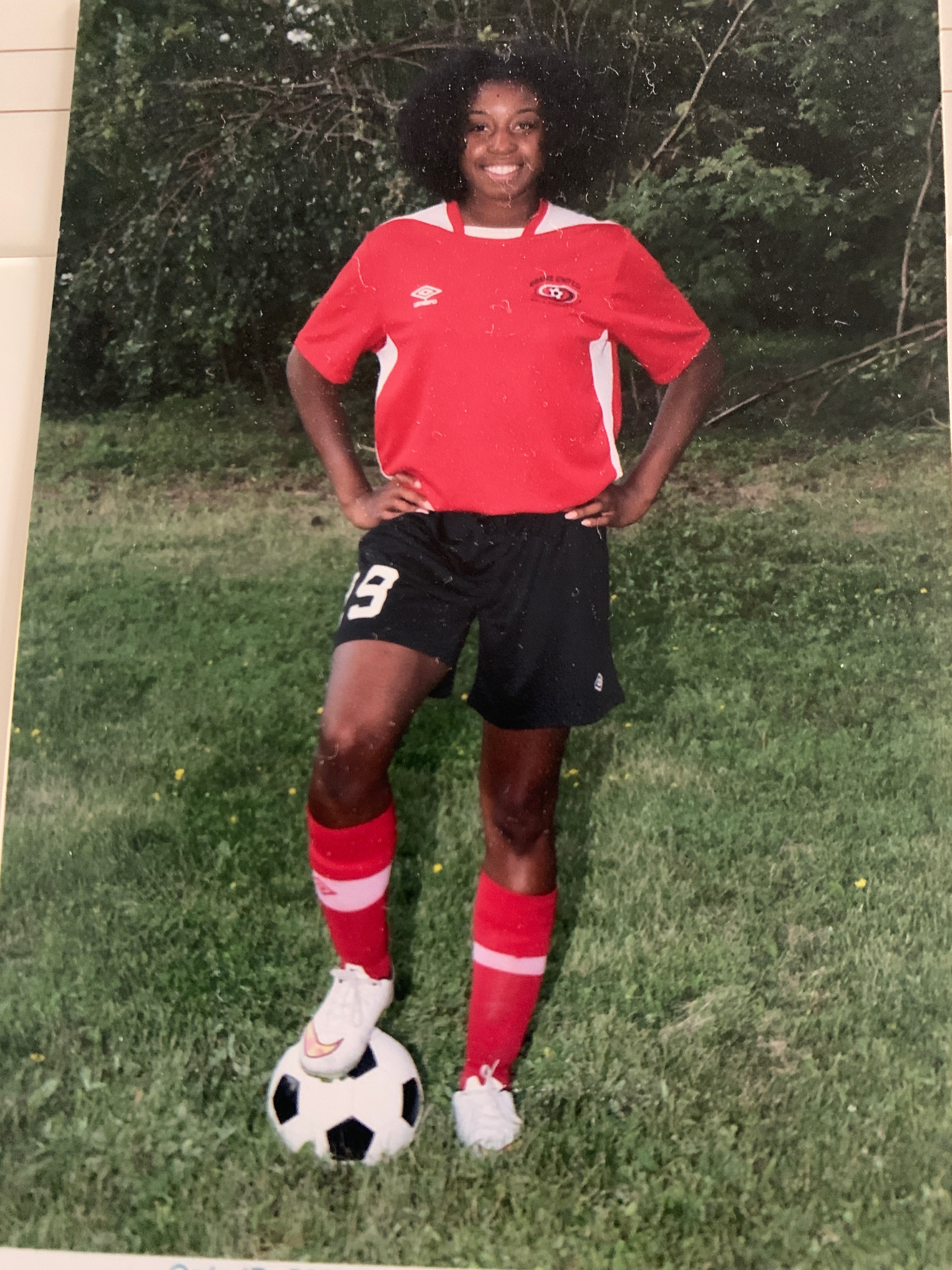 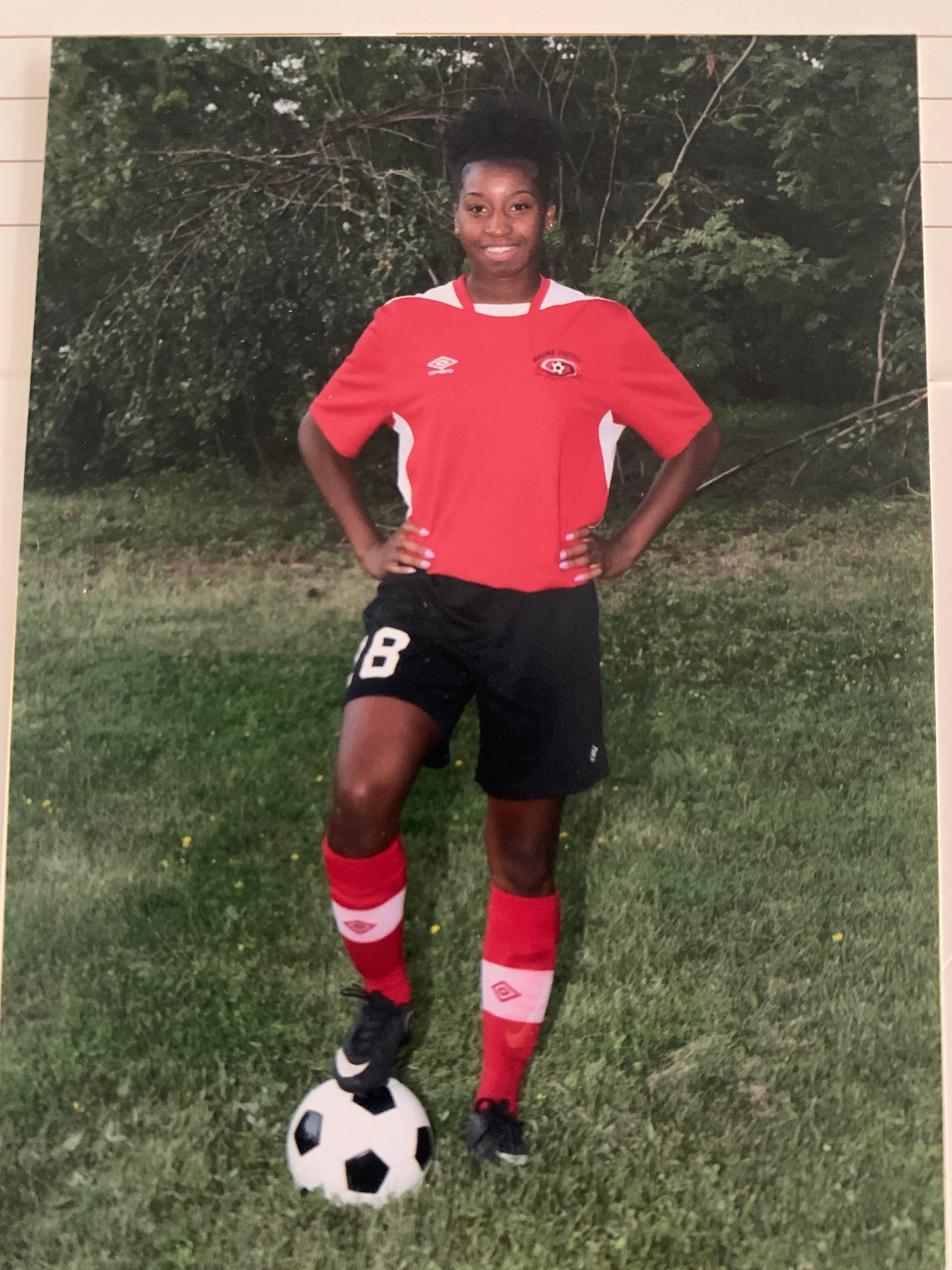 As their close bond continued to develop at home, so did their relationship on the field. Williams called Mikayla and Malikae “inseparable” and said, “everything they’ve done, it’s always been together.”

However, they weren’t always in the same class. In third grade, the girls decided they felt comfortable with separating. Although, when the time arrived, Humphrey Dayes said it came with one strict condition.

“They decided that it was okay for them to be in separate classes as long as they could see each other during the school day,” he told Testudo Times.

When it was time to select a college team, the same rule applied. They wanted to leave Canada and come to the United States together. That was appealing to Coach Ray Leone.

And Leone made a strong first impression on the girls as well, Williams said. They liked the atmosphere he and the other coaches created as well as what he, and The University of Maryland, stood for. She also jokingly added that the milder weather in Maryland compared to the frigid winters in Ontario helped with the decision-making process.

When they moved in freshman year, the pair lived together with sophomores from the team. It wasn’t until the following school year that they moved into Charles Hall with girls in their class, including current roommate, midfielder Anissa Mose.

“I mean obviously we live together so we talk all the time. But I would say that at this point it is kind of like we’re not afraid to say stuff to each other,” Mose said. “We have a really close relationship; we don’t take offense to stuff really and we’re able to be honest with each other.”

It’s very apparent to Mose and the rest of the team that Mikayla and Malikae are inseparably close. The twins eat the same meals, finish each other's’ sentences and even make sure to squat at the same time. Mose said that occasionally they will bicker, like sisters do, but immediately drop it. Their closeness allows them to push each other and grow together as players.

Join us for twin night at Ludwig Field this Sunday!

And they’ve built strong relationships with their teammates, something Leone enjoys seeing.

“I am the most pleased that they’ve come to another country and they made this their part-time home,” Leone said. “It’s because of the way our team embraced the twins and they are friends with each other. Anyone would host them at their house any time, any day and it’s just really strong relationship they have.”

For one Easter, they went with some of their teammates to defender Alexis Hogarth’s house, and they plan on going home with Mose for Thanksgiving. Before the campus closed for the remainder of the spring 2020 semester, they stayed in Maryland with Mose as well.

“Us going to college together just helps us create memories.”

Although they spend time with their friends, the twins remember to honor their parents wish of staying safe during the pandemic. Recently, Mose, Mikayla and Malikae have found fun ways to stay in, such as paint nights and game nights, and they also spend a lot of their time cooking.

Some apartment favorites include chicken fajitas, jerk chicken and shrimp, as well as spaghetti with a mixture of red and white sauces. They also go out to eat often, but they always wear their mask, wash their hands and only eat outside at an appropriate social distance.

Despite the coronavirus pandemic resulting in a non-traditional season, the twins are focused on the prospect of having a successful run come springtime. They are hoping the momentum from last year carries over into the next one, even if it is delayed.

“Getting into the Big Ten Tournament really shows what potential our team has, and I think that we’ll keep working hard and improving individually and as a team,” Malikae said. “I think we have a chance to go even further than we did last year so that was the motivation.”

Their faces lit up as they discussed being reunited with their teammates and having the time to create deeper relationships, with their parents allowing them to return north of the border.

“It’s great for us to be together on the field and start practicing because our team has been away from each other for so long,” said Mikayla. “We’re all just trying to create bonds and relationships on and off the field and I think that’s really important.”

“They’re such gifted players, very coachable. They had the whole package.”

When they were younger, Leone said they mainly led by example, but as they’ve gained confidence, they’ve also grown into vocal leaders.

“They both speak their piece,” he said, “Also, they’re in different lines so one’s up top and one’s in the back, so they basically are leading the people around them.”

Because they play different positions, there is no direct competition, only sisterly constructive criticism.

But my sister is definitely the one that’s always pushing me to do better and also I think that I do the same as well,” Mikayla added.

Anissa and the rest of their teammates notice that motivating dynamic as well.

“Milli is able to give Kayla pointers on what she could have done differently or how she could get away from her defender because Milli plays her position very well,” Mose said. “She can give her advice on what she might be able to and vice versa for Kayla.” 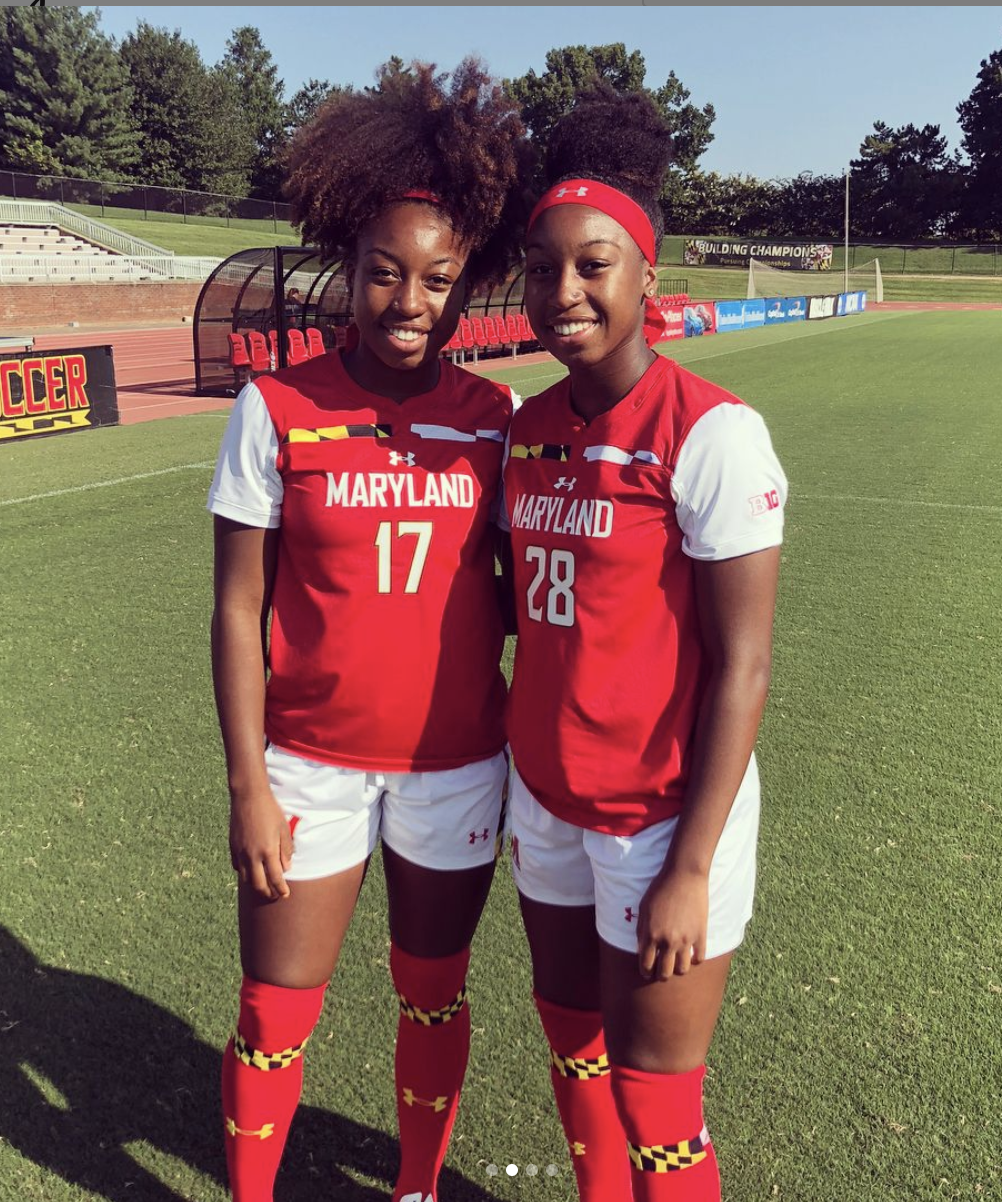 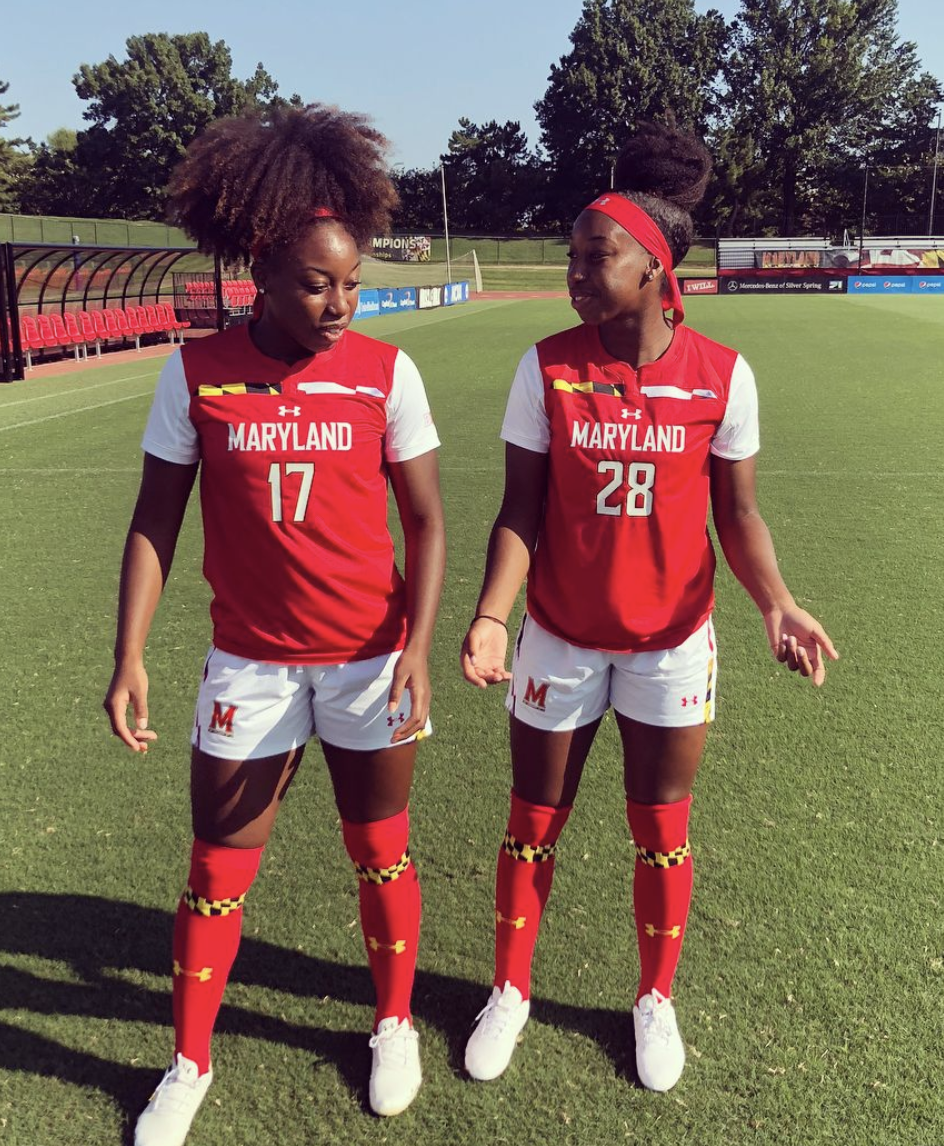 Although they are still just as close and rely on each other the same, throughout their time here at Maryland, the duo has become more independent.

“I’ve seen where they both have grown and kind of come into their own,” Williams said. “They’re making their own decisions but still referencing or going to and hitting ideas off each other.”

Their father agreed. “They were pretty much sheltered before,” said the elder Dayes. “Now, having been on their own, making things on their own. paying a few bills on their own, it’s good to watch them grow gently.”

Their proud, supportive parents ultimately just want them to be happy. They’d love to watch them continue their education but would also support them if they keep playing soccer.

Although they have some ideas of what post-grad life may entail, possibly continuing their education as fifth years or going overseas to Europe to play professionally, the twins are grateful for the time they are experiencing together right now.

“Us going to college together just helps us create memories. Watching each other grow from freshman year to senior year. That’s just a great feeling for both of us because we have stuff to talk about when we get old and grey,” Mikayla said, ending the interview the same way she started it, laughing with Malikae.

View all stories in Maryland Football