The Maryland men’s basketball head coach doesn't get to be a fan much, but Chiefs football has never left him.

Share All sharing options for: For Kansas native Mark Turgeon, Chiefs’ Super Bowl appearance is worth the lifelong wait

As Maryland men’s basketball gathered for its last huddle at Sunday night’s practice, head coach Mark Turgeon had an extra message for his team.

“Yeah, my Chiefs made it after 50 years!” sophomore forward Jalen Smith recalled him saying.

According to players, Turgeon is usually in a good mood, but the Topeka, Kansas, native was feeling especially cheery after Kansas City came away with a 35-24 victory in the AFC Championship to advance to the Super Bowl.

“He was ecstatic the whole practice,” Smith said. “He was just happy.”

With all the stresses and the hectic schedule of being a head coach in arguably the best college basketball conference in the country, 54-year-old Turgeon doesn’t often get to just cheer on a team for fun. But when it comes to the Chiefs, he can take off his coaching hat and just enjoy being a die-hard fan.

As he watched the team coast to victory at home with his family in Kensington, Maryland, one of the first things Turgeon did was give his wife, Ann, a big hug. “I brainwashed my whole family into being Chiefs fans,” he jokes.

Now the Turgeon children — Will, Ella and Leo — will all be able to look back on the time their team made it to the Super Bowl. It was just the second game 20-year-old Will — the biggest fan of all three since he grew up in Kansas for 10 years — got to watch with his dad all year because of the schedules at Maryland and Catholic University, where he plays point guard.

“Me and my dad, just like being huge fans, got a little bit emotional. He’s been waiting for 50 years, so I can’t imagine — I’ve been doing it for 20 and it’s been like hell,” Will told Testudo Times. “My mom was just excited — she ran upstairs, grabbed some Chiefs jerseys and took a picture. And my siblings were just there supporting us. So it was a really good event that brought the family closer together, which is important.”

When Kansas City last played on the big stage in 1970, the now-Maryland head coach was just shy of 4 years old, so he doesn’t have any recollection of the festivities.

Turgeon’s first memory of watching a big Chiefs game was nearly two years later when the team took on the Miami Dolphins in the AFC divisional playoffs on Dec. 25, 1971. His father drove the family to Manhattan, Kansas, to watch the game in a hotel room because of the 60-mile radius TV blackouts back then.

At first though, the TV didn’t work. Turgeon remembers his dad getting mad at the hotel and then having to switch the channels and move the antenna back and forth to watch.

The game went to double overtime and remains the longest in NFL history. The Chiefs led 24-17 in the fourth quarter, but the Dolphins scored with 1:25 in regulation to tie it. Kansas City couldn’t manage to win on a field goal, so the contest went to overtime. Both teams missed field goal attempts in the first extra period, but Dolphins placekicker Garo Yepremian drilled a 37-yard field goal in double overtime to defeat the Chiefs.

“I just remember, we lost, my dad was mad and we drove home,” Turgeon said.

Growing up, Will’s favorite non-Chiefs player was San Diego Chargers running back LaDainian Tomlinson. So whenever the team came to town, Mark Turgeon made sure to take his son to the game.

And around 35 years after he witnessed Kansas City fall to Miami on a field goal, he got to watch his team win a game in the same fashion with his son.

Tomlinson nearly spoiled the day. The Chiefs were up 27-13 in the third quarter, but the Chargers running back scored two touchdowns in the fourth to tie the contest. Kansas City managed to win it in the final seconds though, with Lawrence Tynes kicking a 53-yard field goal with six ticks left on the clock.

(Though it was years before Turgeon was hired by Maryland, it’s worth noting that former Terp Shawne Merriman had eight tackles, seven of which were solo, for the Chargers in that game.)

“We stayed for the whole game. It was definitely the game that made me fall in love with the Chiefs, just seeing a packed stadium, loyal fans, great fans, loud fans,” Will said. “Yeah, it was just an awesome time and ever since definitely that game, I’ve just been obsessed with the Chiefs.

The pair would go to a few games every year back when they were in Kansas, and Leo has tagged along for training camps since. 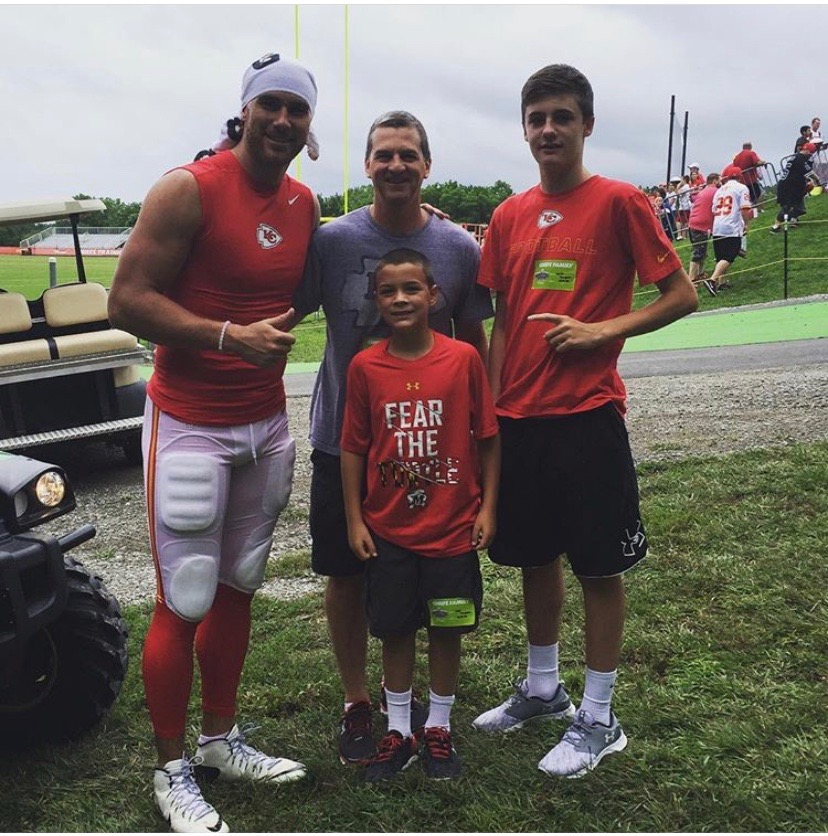 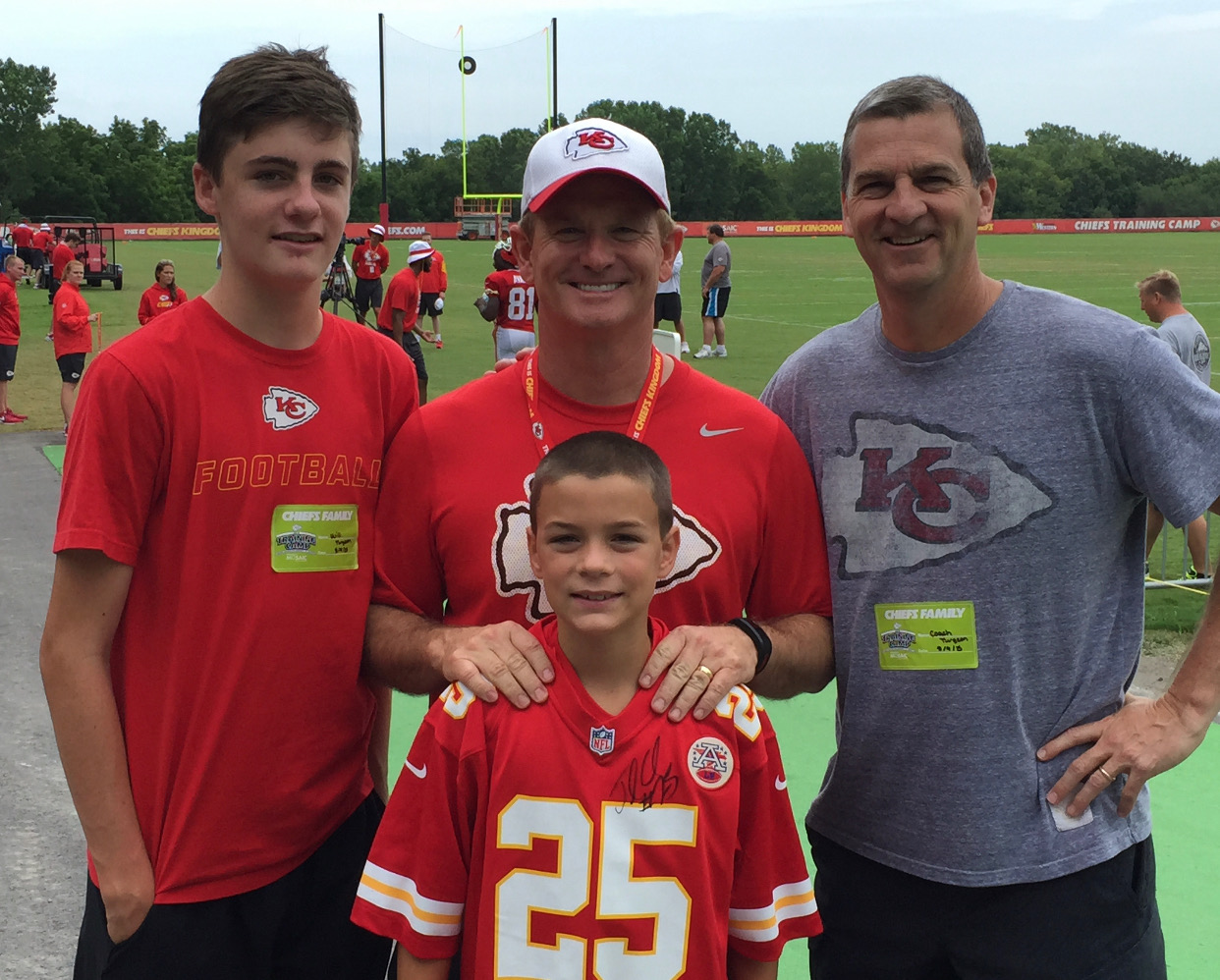 Photos courtesy of the Turgeon family

Once the family moved to Maryland in 2011, Mark and Will found a spot in Bethesda where they often watch games with fellow Chiefs fans. Will said his dad typically gets more into the games when they’re watching at home, though.

“He’s loud, he’s cheering. He loves them, he loves the guys,” Will said. “And the fact that I get to watch it with him and I love it as much as him is just a good experience for him.”

And though he didn’t get to see Sunday’s game with his Terp family, Turgeon carried over all of his excitement to practice that night.

“He definitely made sure that we knew that the Chiefs were in the Super Bowl for the first time in 50 years,” senior guard Anthony Cowan Jr. said. “He was hyped.”