The news comes via the point guard one: 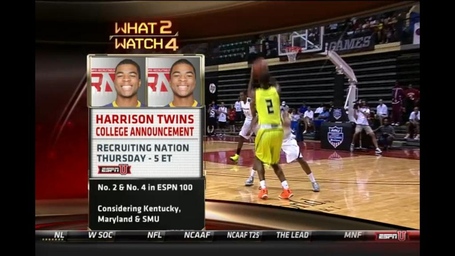 So ... gonna be a long wait until Thursday, huh?

Of course, that they're announcing early is indeed bombshell news and totally changes the game. How? I'm ... not so sure. If the rumors about Turgeon & Bino being in Houston last week are true, let's just say that the timing there seems mighty suspect. Which way, though? Convincing them Maryland is their best option and they should just commit? Possible. But I have some doubts that they'd move up their announcement date, which has been holding steady for months now, simply because Turge talked them into it. Just as likely, Turge and/or Bino got wind (through Papa Harrison, most likely) that they were going to pull the trigger for Kentucky early - again, for reasons I can't necessarily fathom, unless the recruiting process was really wearing on them, which is possible- and made a last-ditch attempt to sway them back.

Like I've said, a few people may know what the hell's going on here, but it's tough to sift them out from the thousands of clueless chancers. That being the case, treat everything as speculation, buckle up and enjoy the ride until Thursday. It'll be a crazy one.

Full Coverage of the Harrison Saga, from Start to Finish