The Terps have talented guys ready to step up.

Share All sharing options for: Maryland football should have enough depth to reload on the defensive line in 2016

Maryland football lost two if its best defenders from a year ago, Yannick Ngakoue and Quinton Jefferson, to the NFL. How can the Terps go about replacing them?

A defensive end, Ngkaoue set the team's single-season sack record in 2015, springboarding himself into the third round of the NFL Draft. Jefferson turned in a solid season at defensive tackle and punched his ticket to the NFL as well.

The good news is that Maryland has a lot of returning experience on the line. Ngakoue and Jefferson are the only two players not returning from 2015, and the Terps will add an impressive transfer and a heralded freshman to what is now an experienced group.

Depth on the inside

David Shaw is back with the team after suffered a season-ending injury for the second straight season. Shaw started the team’s first four games of 2015 before a dislocated elbow (ouch) ended his season. But he's not guaranteed to reclaim his starting spot. In his place, Azubuike Ukandu and Kingsley Opara held their own, enough so that they very well might continue as the starters to begin 2016.

One of the teams’s best players and a converted quarterback headline the unit.

The wild card in this group is freshman Adam McLean, a former four-star recruit. McLean originally enrolled at Maryland as a member of the class of 2015, but left the university due to some eligibility issues. He was likely to redshirt the season due to a knee injury anyway, and he’s back in 2016. Maybe he won’t play very much behind Ukandu, Opara and Shaw, or maybe he will. It's unlikely the team will use just three defensive tackles in their 4-3 sets, but Malik Jones, Oseh Saine and Keiron Howard could also become parts of the rotation. No matter what, McLean figures to be a big part of the team's future on defense.

Regardless who's listed as the two starters inside, Maryland will benefit from some depth at the position. Ideally, this would enable the team's run defense to continue to be strong throughout the game and avoid any fourth-quarter breakdowns. No matter what, having the kind of size that these guys bring (Shaw, Ukandu and Opara are all over 300 pounds) certainly helps your run defense. But what about the outside? 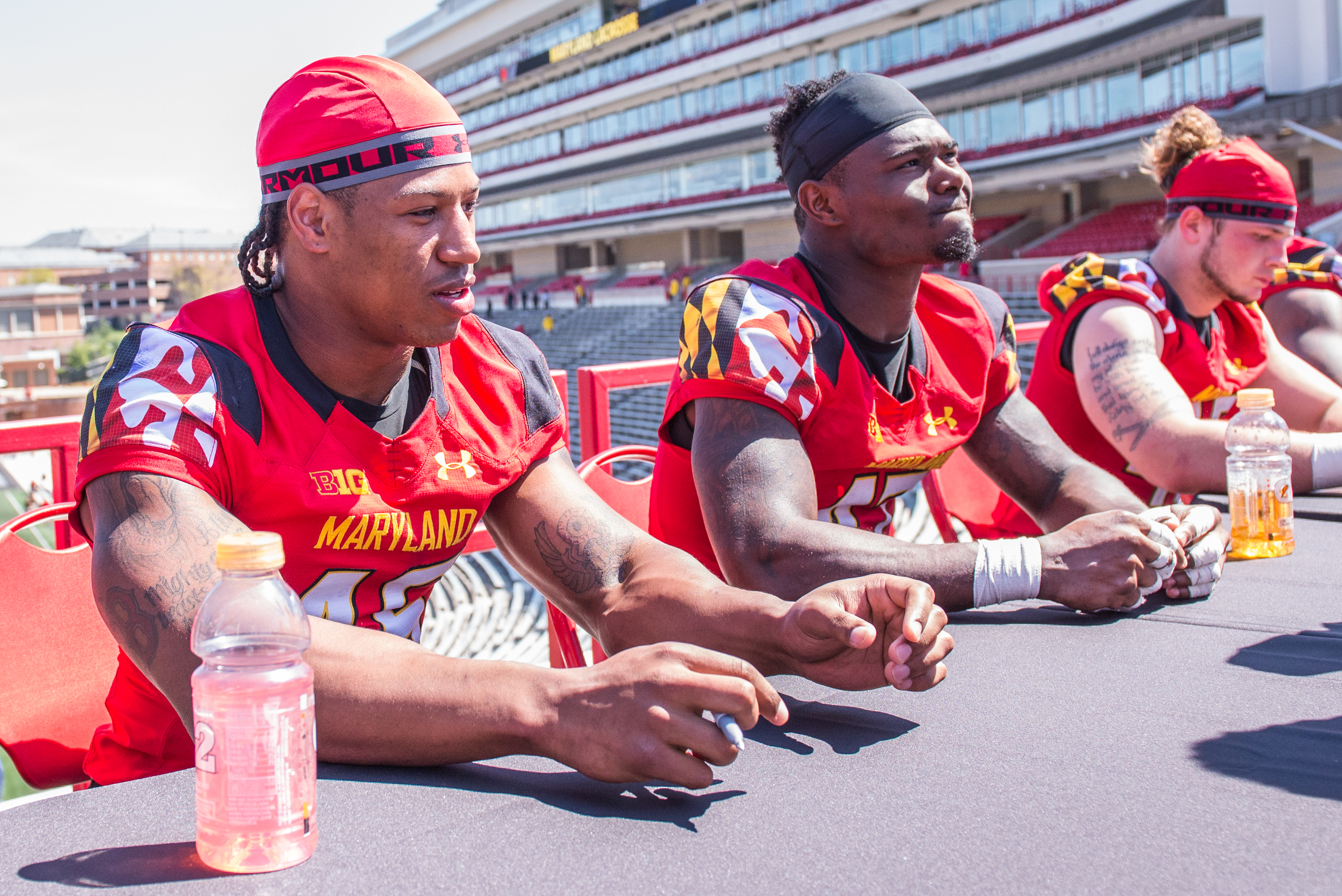 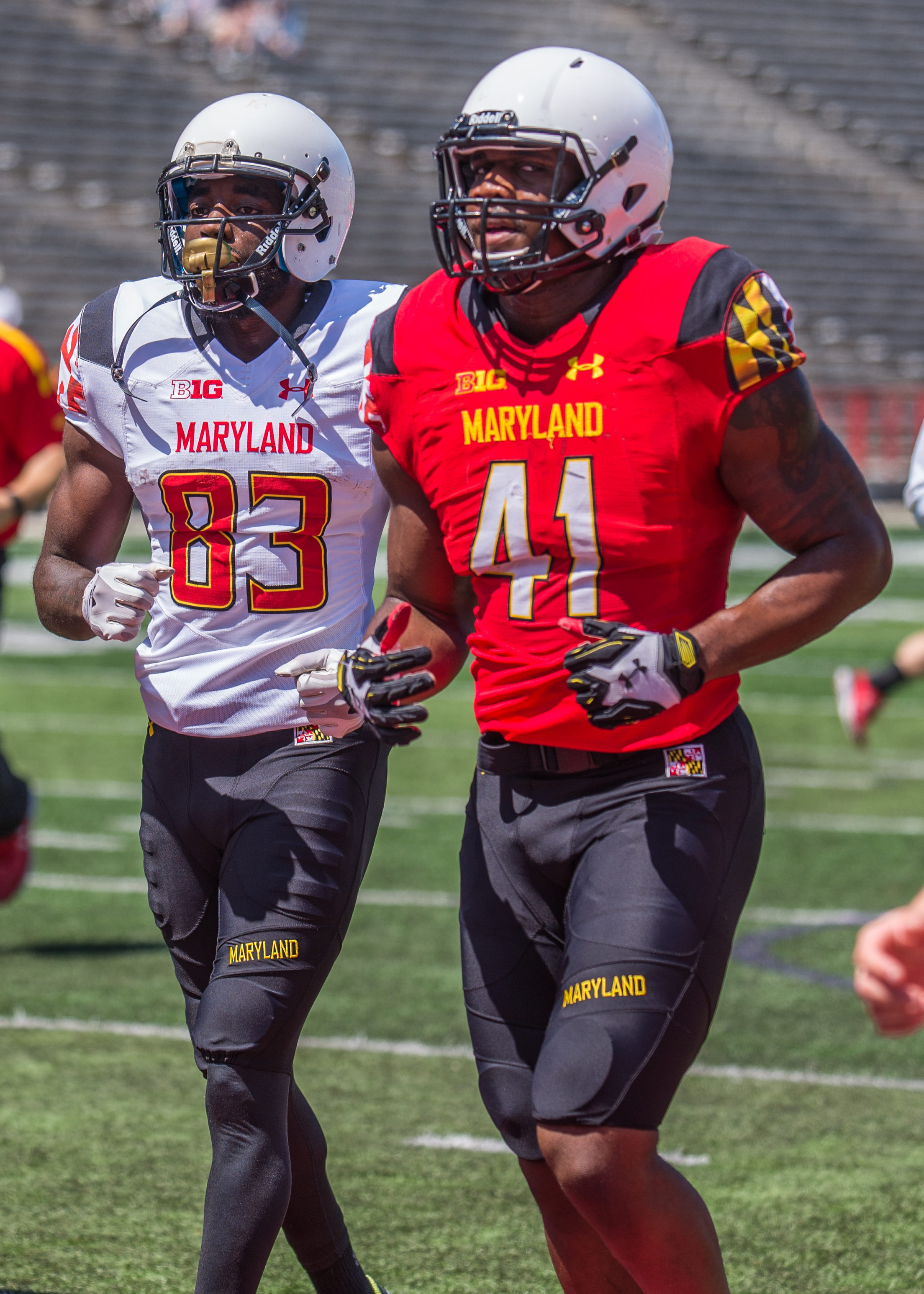 Jesse Aniebonam and Melvin Keihn have been some of the most popular names at Maryland’s fall camp. Aniebonam, a junior, is a former four-star recruit who spent his first two years at Maryland studying behind Ngakoue. Keihn, a sophomore, sat out last season after transferring from Virginia Tech. They’re battling for the starting spot at a new position DJ Durkin has brought to the program. At the "buck," they’ll play a hybrid linebacker-defensive end position. In the 4-3 they’ll have their hands down like a defensive lineman, and in the 3-4 they’ll be up like an outside linebacker and have some pass-defense responsibilities, sometimes moving behind the tackles for more complicated blitzes. This position requires a superb, versatile athlete to can rush the passer better than a typical outside linebacker and still be able to drop into coverage. It might not matter much who ends up as the starter, because Aniebonam and Keihn should both see plenty of playing time. And on passing downs, maybe we’ll see both of them on the field, lining up on opposite ends racing to see who can get to the quarterback first.

Playing a straight defensive end position across from the buck will be senior Roman Braglio, a returning starter from last season. Braglio had 5.5 tackles for loss and three sacks, and turned in an -- albeit not flashly -- solid junior season, his first as a regular starter. Braglio is more of a bull-rusher than a speed guy -- he won't rack up big numbers -- but expect him to be an important contributor and a valued senior leader on this defensive line.