In 2015, Maryland football due for some turnover luck

How the Terrapins, with an even turnover ratio, drew the short end of the stick last season.

Share All sharing options for: In 2015, Maryland football due for some turnover luck

Without changing anything at all, the Maryland football program is due to get luckier this season.

The Terps have felt like the antithesis of luck in recent years. This is a team, remember, that lost three quarterbacks to ACL tears in 2012 and started a backup linebacker under center for a third of the season. This is a team that has lost games by calling timeouts before opposing kickers missed game-winning field goals and got to try them again, and on and on. That all felt unlucky, but in the 2014 season, Maryland was indisputably, statistically unlucky.

That sounds pretty fair, yes, but it was actually a bit of an injustice to the Terps. If everything unfolded according to probability, Maryland would've only turned the ball over about 21 times on offense and taken it away 25 times on defense. The Terps' adjusted turnover margin was plus-4.3. That's four hypothetical turnovers -- almost definitely the value of an extra win -- that Maryland simply didn't get.

How, exactly, was Maryland so aggrieved? Stay with me.

While there are probably small variations in a given team's ability to fall on a fumble, fumble recoveries aren't a skill, so we expect teams to average a 50 percent recovery rate. National averages in 2014 were consistent with this point, clustering right around the even rate you'd expect.

The Terrapins' opponents fumbled 21 times, out of which the defense forced 11. Maryland recovered 13, or 61.9 percent of its opponents' fumbles. That's about 12 percent more than the even 50 percent of fumbles a team should expect to recover, so Maryland was actually highly fortunate here. The same went for Maryland's offense, which coughed up the ball 18 times but got it back 10 times, for a fumbles-lost rate of 44 percent. Generally, Maryland should've expected to lose one fumble more than it actually did.

... and how they really, really weren't

I made this point in a recent post about Maryland's secondary, but it bears emphasis here: Maryland's defense was brutally unfortunate in 2014 when it came to securing interceptions.

Maryland was excellent last year at breaking up passes, but not at actually stealing them away: 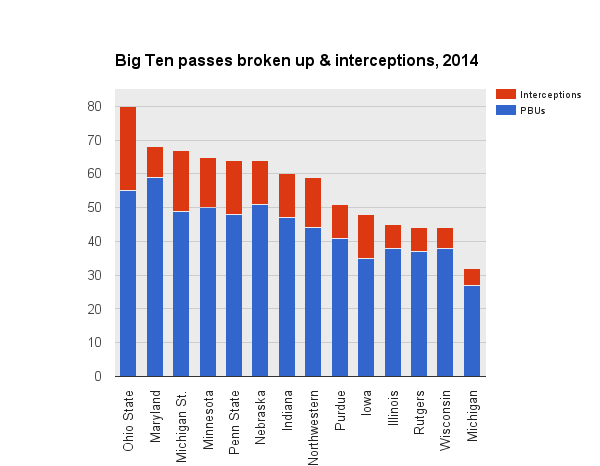 Maryland got hands on 68 passes but only intercepted nine. That, by a lot, was the lowest ratio in the league: 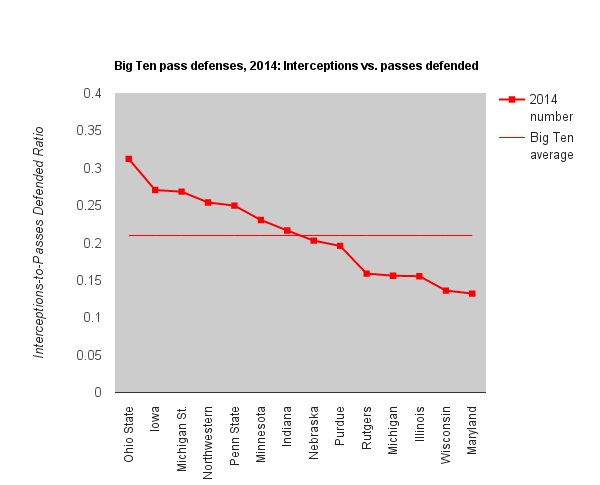 That suggests Maryland was unusually unlucky not to get more interceptions.

On the other side of the ball, it was the opposite story. As ineffective as C.J. Brown was, Maryland's interceptions-to-passes defended ratio on offense suggests the Terps got a bit of a raw deal. Of the 56 defended passes by Maryland quarterbacks, 14 (25 percent) were picked off.  The Big Ten average was 23 percent, the national average again 21.

The Terps could reasonably expect to have thrown one interception less a season ago, and to have intercepted about five passes more than they did. In sum, their adjusted turnover margin was plus-4.3, even though their actual rate was split right down the middle. The 4.3-turnover deficit from what Maryland actually had last year and should've expected to have, per the numbers, was the 31st-biggest gap in FBS. It suggests Maryland should've done better.

Why this matters for the 2015 Terps

But that's all hindsight. Why should it be relevant for this year's team?

For one thing, it might not be. Luck isn't a one-on, one-off proposition, as any Chicago Cubs fan will tell you. The Terps could come out in the net negatives again, just as easily as they could see some good fortune and swing into the positives. Still, the likeliest outcome is that Maryland's turnover margin this season hews closely to the team's true talent level. And that talent level at the relevant positions should be slightly better this season than last.

Caleb Rowe will probably replace Brown at quarterback, and he's a more talented passer. Maryland's secondary is almost completely intact, so it shouldn't be missing interceptions at the same unusual clip it did a season ago. Add it up, and turnovers should be incrementally kinder to Maryland going forward.