Photos, quotes from Stefon Diggs' first week with the Vikings

The former Maryland wide receiver is already making an impression in Minnesota.

Share All sharing options for: Photos, quotes from Stefon Diggs' first week with the Vikings

Stefon Diggs is working on making a name for himself as a rookie for the Minnesota Vikings. He had a great career as a Maryland Terrapin (150 receptions, 2,227 receiving yards, 14 touchdowns), averaging 14.8 yards per catch which is impressive for any receiver in the college ranks. He can be a cog in an offense that is being rebuilt.

Diggs addressed the media at mini camp practice and said he's happy to be in Minnesota, "It’s a great situation dealing with a great coaching staff. There are a lot of great people here and I’m just happy to be here right now." He didn't feel like the Vikings were going to take him in the fifth round, but he was ready to get too work as soon as found out. When discussing the kind of receiver he is, two words came to mind: dominant competitor, "I'm a dominant competitor, I'm a worker. I’ll come to work just like everybody else and just try to contribute any way I can."

He believes he has a leg up on learning Norv Turner's offense, "It’s kind of similar to the offense I came from so as far as the stuff that’s going on right now, the things that I’m learning, I’m ahead of the game a little because I’ve been in a similar system." In addition to that he believe the coaching styles of the Vikings and Terrapins aren't that different either "...the coaches coach in similar ways but it’s just about doing it his way, trying to do it somebody elses way; everybody’s different but it’s not that big of a change."

.@Stefon_Diggs college tape shows big-play ability when in the open field. Check it out --> http://t.co/amWkbHgXUG pic.twitter.com/fgqq0CEgi6 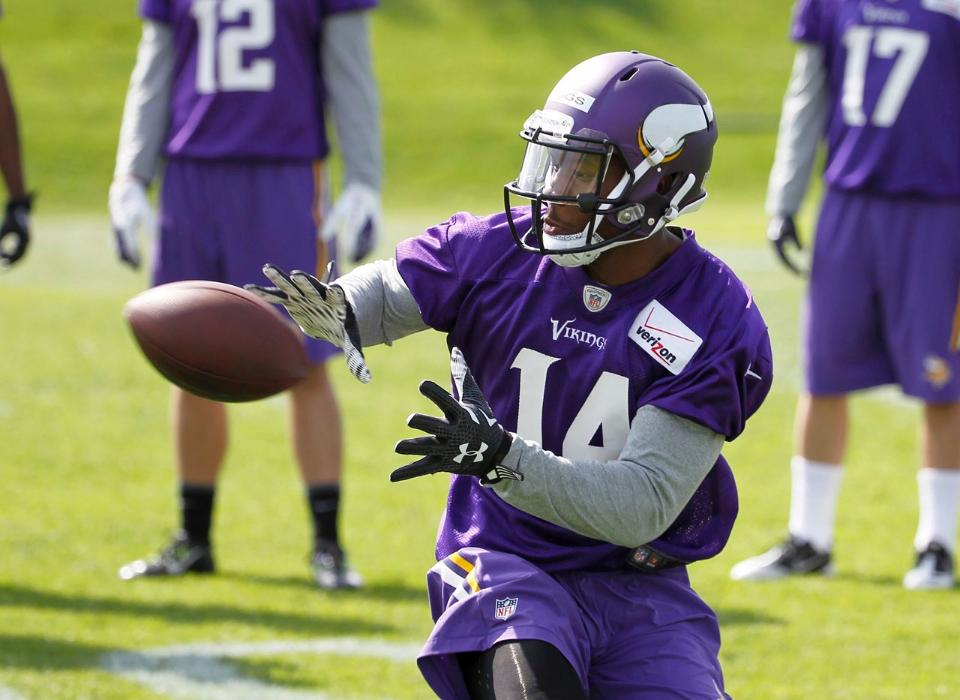 Veteran players like Cordarrelle Patterson, Mike Wallace and four-year man Jarius Wright are guys he has to compete against and if Diggs works hard enough, can beat out for a bigger role in the offense.

Patterson was drafted by the Vikings out of Tennessee in 2013. Coming up on his third year, Patterson did great things early in his career. He set a Vikings record and tied an NFL mark with a 109-yard kickoff return in the opening kickoff vs. the Green Bay Packers in October 2013 and led the NFL in kick return yards with 32.4 yards per return and tied the team record with two kick off return touchdowns. In his rookie year, he was first team AP All-Pro and earned a spot in the Pro Bowl. He was only the third rookie in team history to do that.

Mike Wallace is joining the Vikings this season, his third team in about six years. Prior to Minnesota, he was with the Pittsburgh Steelers and Miami Dolphins. He has had two 1,000 yard seasons in addition to two seasons where he scored 10 touchdowns. The guy has a lot of speed and quickness. He's a long-ball threat, being that his career average in yards per catch is 15.6 and longest pass caught is 95 yards. He's a threat to any defense he faces and could be a threat to Diggs' chances being the number two or three wide out on the depth chart.

Jarius Wright out of Arkansas hasn't had many games under his belt as a starter but caught 42 passes last season for slightly under 600 yards. Wright and Diggs' will have a bit of competition going for the third spot unless Diggs can impress the coaches so much so that he gets a higher spot.