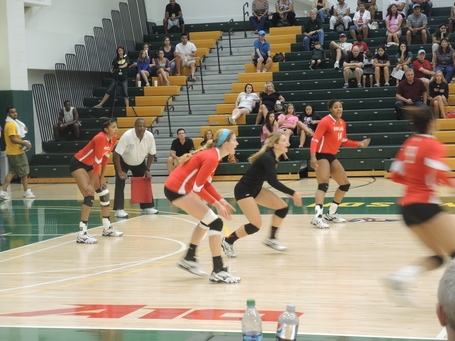 Another tournament title and an undefeated record are what Maryland has to show for their first two weeks of work. Saturday morning a match versus East Tennessee State presented the first challenge. Set one was controlled early by Maryland with leads of 17-7 and 19-10 and cruised to a 25-16 victory. The second set was a 180 degree change as ETSU roared out to a 19-9 lead and won 25-18. The Terps jumped out to a 15-7 lead in the third set and finished it with a Hailey Murray kill, 25-16. The fourth and final set was competitive with neither side able to pull away. Late kills by Chavi St. Hill and Adreene Elliott sealed the set and match victory, 25-23. Overall, a balanced offensive effort with four players above 9 kills led by St. Hill's 12 and defensively the Terps were able to hold ETSU to a .000 hitting percentage.

The final match of the weekend against George Mason was a back and forth affair. The first set was a textbook example of what the Terps hope to accomplish. They hit .345 with 13 kills and held the Patriots to -.100. The second, third and fourth sets each team traded wins. The fifth and final set was extremely close with Maryland taking a quick 4-1 lead. The lead closed to 10-8 before a Mason timeout. The Terps began to pull away, 13-10, but the Patriots quickly tied it up at 13-13. A kill by St. Hill gave Maryland the lead for good and a Mason error finished off the match and secured the second tournament title in as many weekends. Ashleigh Crutcher had a great night leading offensively with 24 kills and hitting .395. Amy Dion led in digs with 26 and Carlotta Oggioni had 47 assists.

Crutcher was named to the all tournament team along with Oggioni and Elliott. She also eclipsed a career milestone with her 1000th kill.

Maryland has a tough trip next weekend back down to North Carolina with matches against Radford on Friday and Georgia State and the host Appalachian State on Saturday. Radford is coming off a monumental win against California last weekend and App State has victories over Tennessee and Louisville on the year.