Men's soccer at the crossroads. Young Terps goal is to find the goal

The Terps have shown some improvement as they enter the middle third of the season but need to find another offensive gear if they intend to challenge their new conference and make another deep NCAA run.

Share All sharing options for: Men's soccer at the crossroads. Young Terps goal is to find the goal

Sometimes an image captures a moment more precisely than a written description. Sometimes a chronicler of events berates himself for being unprepared to capture such an image. Such a confluence occurred Friday night in the moments following Maryland's 1-0 loss to the Michigan State Spartans in the first Big Ten home conference game for the Terrapins' men's soccer team. For nearly ten minutes, Maryland's head coach Sasho Cirovski, wearing a grey windbreaker against the cool breezy night, stood alone and barely moving halfway between the sidelines of the pitch at Ludwig Field looking back toward the heart of campus.

Maryland had just endured its third shutout in the season's first six games - a puzzling and troubling situation for a program that, before the season began hadn't been shutout since September 20, 2011. As the coach said after the game, "I thought at this point we'd have a little bit more stronger relationships on the field. We just don't."

As Cirovski said before the season, Maryland's early schedule was built to challenge the team and the quality of the opposition combined with three true road games would have challenged any squad let alone one as young as this iteration of Maryland soccer.  With slightly more than a third of the season behind them, the Terps' opponents have a combined record of 17-14-6 in their non-Maryland games. Only Michigan, where the Terps played to a 1-1 tie has an overall losing record.

The Terrapins' defense has been as good as advertised picking up two shutouts and conceding only seven goals in the first seven games. However, the Terps have scored only six times in those seven games and three of those came in the contest with Coastal Carolina. This brings Maryland's season to a clear 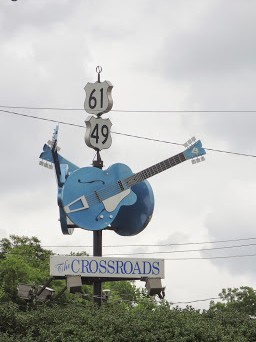 The Terps need to find ways to score goals and they need to do so soon.

As noted in the season preview, this edition of the Terps was something of an electron to last season's proton. In 2013, Maryland was loaded up front with experience and scoring threats but entered the season with a youthful back line that would require time to develop. By the outset of the 2014 campaign, the defensive youth had become seasoned running through the gauntlet of the ACC and reaching the NCAA championship game but the attack had lost nearly two-thirds of its production. Thus, the front line would experience the growing pains. And, with Maryland suffering three shutouts in the first seven games, the process has indeed been painful.

In his post game press conference following the Michigan State loss, the media repeatedly questioned Maryland's coach about the scoring issues. Here are some of Cirovski's responses:

"We've played so many guys up there that we haven't been able to find any rhythm or synchronicity. I think the spacing, timing of players is just not there."

"It's only the first third of the season. This has been a tough stretch. I certainly didn't expect our record to be this but we have an opportunity to recover in our schedule. We'll find a way to score more goals and find a rhythm."

The coach put that last statement into effect immediately. Against Michigan State, Cirovski started an unusual lineup that included Ryan Reid, Mikias Eticha, and Christoffer Wallender-Ianev and moved defender Jereme Raley to the front line. He used six players off the bench. Three days later against Dayton, George Campbell was back in the starting lineup along with David Kabelik up front and only three non-starters saw any playing time.

Following a strong second half against Michigan State that saw the Spartans under constant pressure, the Terps built on that. They took to the pitch against Dayton and played what Cirovski called, "probably our most complete 90 minutes." He added, "I thought the guys came out with a lot of energy and commitment and quality tonight. We certainly deserved a lot more than the goal we got."

The play of freshman George Campbell was among the bright spots for Maryland against Dayton Monday night. Campbell had been playing with an ankle injury that had prevented him from training and limited him only to actual game play. Both coach and player acknowledged his improving health and growing confidence. And just as clearly, Cirovski liked what he saw from the combination of Campbell and Kabelik in the second half of the MSU game. Campbell played 72 minutes against Dayton while Kabelik and Eric Carbajal split the lion's share of minutes at the other forward spot.

The Wisconsin Badgers come to College Park for a game under the Friday night lights so Terrapins fans will soon have a chance to see whether Cirovski intends to maintain this shortened rotation or whether he will return to a more expansive use of his bench.

Despite the improved play, the fact remains that Maryland has played two consecutive home games and hasn't scored a goal in the run of play. Add the 0-0 tie against UMBC and the Terps and their fans are looking at a third home game (plus 20 minutes) without a score during play.

This is how the Terps scored their lone goal against Dayton... 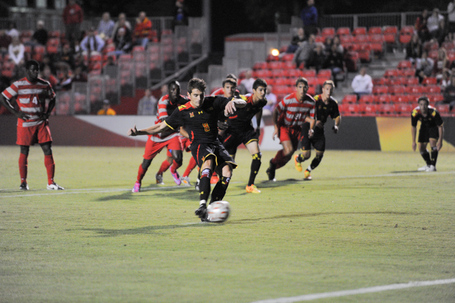 ...on a penalty kick by Mael Corboz.

Regarding the lack of production, Cirovski said, "Of course it's concerning but it's a process. We have a lot of young players. We're still establishing the relationships. But tonight we made a lot of progress."

Admittedly, it took a shot off the post and a spectacular defensive play for Michigan State to maintain their shutout and the post was again unkind to Maryland in the game with Dayton but these are opportunities that the Terps will have to convert if they are to become the team their coach and fans expect. Soon, progress will have to translate into results.