Let's discuss what we learned from Maryland's win over the Orange.

Maryland had a comfortable road win on Saturday, beating Syracuse 34-20 at the Carrier Dome. It was Maryland's third victory of the season and their second on the road, which gives them a final non-conference record of 3-1 this season. So what did we learn from the Terps' win yesterday?

The team efficiencies are the point contributions of each unit to the team's schedule-adjusted scoring margin, on a per-game basis. For example, a value of +8 for the defense would mean that the defense adds 8 points per game towards that margin through all its contributions while on the field (preventing points, ending drives, forcing turnovers, etc.). Efficiencies update daily.

So essentially, Maryland's special teams have been adding 7.86 points per game to Maryland's margin. That's....pretty good.

On Saturday, Maryland had another key special teams play, blocking a Syracuse punt, their second of the season. They're tied for the lead in the NCAA in blocked punts with two and are tied for 2nd nationally with three blocked kicks. Add in Brad Craddock being perfect on the season in field goals and extra points and the home run threat of Diggs and Likely and you can see why this unit is so special this season.

Maryland has really improved their down field blocking

Remember earlier in the year when head coach Randy Edsall really wanted his wide receivers to do a better job blocking down field? Well, they've certainly taken that message to heart so far this season and on Saturday, one play showed just how well they can block and what can result from said blocking. 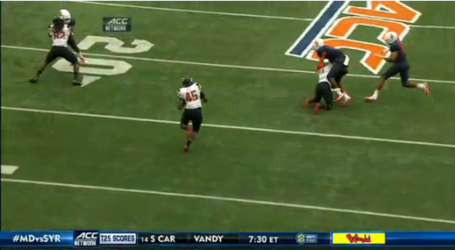 Above is a screenshot of Brandon Ross' 90-yard TD reception. C.J. Brown tossed the ball to Ross in the flat and as he turns up field, wide receiver Marcus Leak and Stefon Diggs have opened up a gigantic hole that Ross hits and bursts through, winning a footrace to the end zone for a Maryland touchdown.

Maryland really needs their wide receivers to continue doing this throughout the season. When they block like this, it helps give Maryland the opportunity for a big play and allows them to more effectively run screen plays and run the ball, something the Terps are going to need to as they enter B1G play.

When you're playing alongside Stefon Diggs and Deon Long, you're going to get opportunities to make plays, as defenses key in on stopping those two play makers. Fortunately for Maryland, Marcus Leak has made the most of his opportunity. He recorded his third touchdown reception of the season against Syracuse, catching what was arguably C.J. Brown's best pass of 2014 to date over his shoulders in the endzone.

His three touchdowns are tops among Maryland receivers and his 202 yards receiving, along with his 11 receptions (tied with Long) are second on the team.

If Leak can continue to shine, it should potentially open up opportunities for both Stefon Diggs and Deon Long, as opposing defenses will no longer be able to double team those two and take their chances with Leak.

Maryland wore their white road jersey yesterday, with the Maryland flag design on the shoulders, along with black pants and the standard black helmet with the flag design down the side:

I think they looked really good. I think that uniform combination is one of my favorites.