C.J. Brown and his offensive line both had problems against WVU.

Share All sharing options for: Film review: Breaking down C.J. Brown and the Maryland passing game against West Virginia

C.J. Brown's passing numbers against West Virginia weren't bad, although they were pumped up a ton by one play, a 77-yard touchdown strike to an inexplicably wide open Stefon Diggs. Brown finished his day with a 115.8 passer rating and 241 yards on 19/35 throwing. On plays other than the Diggs score, his passer rating was 87.6.

Watching the game live, Brown had a hard time making what should have been simple throws. Upon further film review of every Brown passing attempt on Saturday, Brown did, indeed, leave too many makeable completions on the field. But he was under an inordinate amount of pressure all day, because his offensive line - particularly right tackle Ryan Doyle - was overmatched for most of the afternoon. Maryland's offensive line was frankly terrible Saturday, but Brown didn't do a good enough job of adapting to that pressure. There'll be a lot of work for all parties concerned heading into this weekend's meeting with Syracuse.

Here is a list of every one of Brown's passing attempts vs. West Virginia, charted out while watching footage of Saturday's game. The results of the passes are listed, and incompletions are classified by color code. The time markers on the list are pegged to the game tape made available by the Big Ten Network (cable provider login required).

Maryland, for the most part, didn't ask Brown to make throws of significant distances. Twenty-six of Brown's 35 passes traveled fewer than 10 yards in the air, while he threw just two deep passes of more than 30 yards.

So, C.J. Brown, the passer, put together what looks like around the definition of an "OK game." But again, the touchdown pass to Diggs accounted for 32 percent of his yardage and 100 percent of his touchdowns. To the naked eye, it looked like Brown struggled a lot making throws that shouldn't have been hard. Ultimately, he wasn't quite as good as his numbers.

Maryland doesn't seem to trust Brown to throw the ball down the field, so Brown needs to be effective on short routes. He completed only 61 percent of his passes that traveled 10 yards or fewer, which isn't great (though it was better than in Week 1 against James Madison). With all that in mind, on some of the short incompletions, there wasn't a lot Brown could do. Take this monstrosity for example: 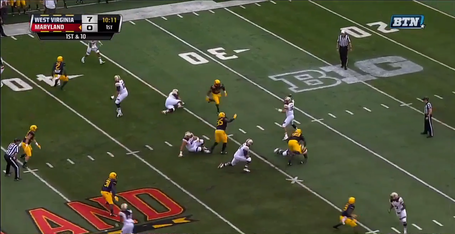 This, right here, is Brown about to throw an interception to West Virginia's Daryl Worley on his first pass of the game. The pass was intended for Marcus Leak, who's clearly running an inside route straight toward a West Virginia defender. He isn't remotely open, and Brown should have never thrown the pass.

But, wow, look at Maryland's offensive linemen. Four of them have been put on the ground by West Virginia pass-rushers, and one is standing upright to Brown's right, blocking a whole bunch of oxygen and not much else. Ryan Doyle is on the ground, also to Brown's right, having been dispatched in less than a second by West Virginia defensive end Noble Nwachukwu (whose name I'm now uncomfortably accustomed to typing out). West Virginia only brought three blitzers, and Maryland's five linemen could do nothing about it. When the ball was tipped, several different Mountaineers could have wound up catching it, because they had all dropped into coverage.

In that shot, Brown's about to release the ball. Nose tackle Christian Brown will deflect it into the air, and it'll be a JV-caliber interception for Worley, who barely needs to do a thing. Brown should have tried to bolt or taken a sack, as there was clearly nobody open. But it's wrong to solely blame him, because he had about two seconds from the time of the snap to release the ball. That falls on Maryland's offensive line.

Brown threw 16 incompletions in total. By my subjective play-by-play evaluations (read: there could be slight variation depending on the evaluator), those incompletions broke down like this: Eight were simply poor execution and bad throws by Brown. Seven were forced or poor throws after the offensive line was beaten by pass-rushers, including one deliberate throwaway. One more, a sideline try for Marcus Leak, was a prayer into a tiny window with little chance of a reception.

To be clear, the offensive line was a huge problem all day for Maryland. Doyle was beaten so badly so many times that Maryland's coaches will probably at least consider turning to Derwin Gray or Damian Prince. The rest of the line didn't do much to stop repeated WVU backfield penetration, either. But no matter the circumstances, Brown can't force throws to blanketed receivers. Doing so almost cost him multiple interceptions, and a sack is always better than that.

What does all of this point to? You can draw your own conclusions, but it seems like Brown really did play poorly on Saturday. He had a lot working against him, including the offensive line, an athletic WVU secondary that Diggs placed in the top three of units he's faced at Maryland and a wet climate. When Brown had time to drop back and let Diggs and his fellow receivers get open, he had his best results. On Diggs's 77-yard touchdown, Maryland's line, to its credit, gave Brown a sturdy pocket and plenty of time: 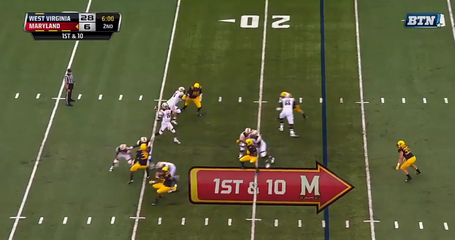 Still, Brown needs to perform better, especially in executing short throws. He's always going to have some limitations throwing the ball far down the field, but he's shown a clear ability in the past to make the simple throws Maryland needs. He wasn't efficient enough on those throws against West Virginia.

When his receivers are obviously in space down the field, Brown needs to at least create opportunities for them to track the ball down. The Terps' receivers are good enough that a chance might be all they need. Brown's throw to Diggs was good enough, if not perfect, but he missed Malcolm Culmer for what would've been an equally easy touchdown on a 35-yard sideline throw in the first half, landing the ball well beyond Culmer's reach. Those throws will never be Brown's strength, but every Big Ten quarterback has the ability to drop in a pass in a situation like that. Brown is no exception, and going forward, the Terps need to be able to trust him to make those throws more consistently.