An up close and personal look at one of volleyball's newest Terrapins, Oregon State transfer Carlotta Oggioni.

Share All sharing options for: Profiles in Terpage: Carlotta Oggioni 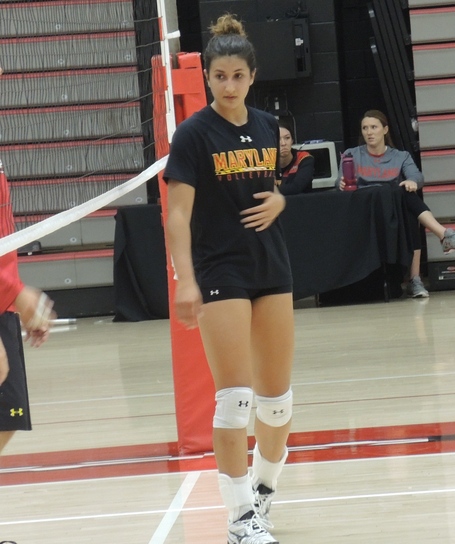 After spending her freshman year at Oregon State, where she appeared in 12 matches, the sophomore elected to transfer to Maryland.

Oggioni reaches her full potential as a setter elevating the games of Maryland’s hitters and has the first of three seasons that earn her three spots on Maryland’s single season top ten in assists.

Like many European transplants, Oggioni struggled with language issues as a freshman at Oregon State which hampered her playing time. As the daughter of two professional volleyball players, Carlotta comes to Maryland with a very high volleyball IQ.  A natural setter, Oggioni will need to take charge of the team quickly if the Terps are going to be competitive in the B1G.

1) Other than teammates and coaches the best thing about being at Maryland is: Being close to a big city is really cool.

2) The workout or drill I love to do is: Scrimmages.

3) My favorite pregame meal is: A salad, a little pasta, and some chicken.

4) My pregame ritual or superstition is: I put on every piece of equipment and my uniform exactly the same way.

5) The best or most meaningful on field moment I've ever had is: Winning the national championship with my club in Italy.

6) The best or most meaningful off field moment I've ever had is: Getting a really good score on the TOEFL (that's Test of English as a Foreign Language for the uninitiated) that brought me to Maryland.

8) If not volleyball, then: Soccer

9) I plan to go to as many Maryland football and basketball games as I can.

10) If people know only one thing about me, I'd like it to be: That I'm a smart person.