Terps gear up for Saturday, Alex Twine and Levern Jacobs are in limbo, and ice hockey is selling their awesome jerseys.

Randy Edsall on Levern Jacobs, Alex Twine: Still ‘gathering all the information’
The status of Jacobs and Twine is still up in the air.  Their presence on the depth chart looks like a good sign, but things could change quickly as more details emerge from the July 19 incident.

After summer work for U.S. Marshals and Maryland football, Andrew Zeller’s future is bright
If Zeller runs into defensive linemen he has trouble blocking, maybe he can just arrest them instead.

Two former Terps will face Maryland as members of James Madison football team - baltimoresun.com
Titus Till and Jeremiah Wilson both left Maryland for James Madison after Randy Edsall's first year as the Terps' coach in 2011. [Pete]

Highly touted Terps freshman Jesse Abiebonam could be factor as pass rusher
Maryland is loaded with talented pass rushers, and finding playing time for all of them could be a challenge - a good problem to have if you ask me!

4-star Darvin Taylor Announces Thursday, Considering Four
Taylor is a coveted defensive tackle, standing 6'2" and weighing in at 295 pounds.  Boasting offers from just about every major program, his top 4 consists of Marylad, Virginia Tech, Florida State, and NC State.  Florida State looks to be the front runner for Taylor's services.

Week 1: We predict all 14 Big Ten football games
What's your prediction for the MD vs. JMU score? 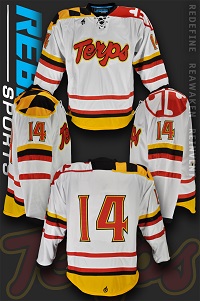 The men's ice hockey team will be selling a second run of these sweet jerseys.  Avery Clair will be handing orders, with contact information found here.  Check out the comments later on for high quality photos.