The Terps showed some signs of improvement but still failed to find the net and they fell 1-0 at Pepperdine Sunday afternoon. The loss marks the first time since 1998 that Maryland has lost the first two games of the season.

Share All sharing options for: Terps fall 1-0 at Pepperdine

Rimmed by widely spread palm trees and with the Pacific Ocean visible in the background, the Maryland women's soccer team faced off against the Pepperdine Waves on a sunny Sunday afternoon at Tari Frahm Rokus Field in Malibu, California. (Update, lest you think I am exaggerating, take a second look at the photo op Pepperdine's pitch taken today courtesy of NeonParkTerp. I've added a second at the bottom of the story.)

The Terps, looking to bounce back from Friday night's 3-0 loss to the defending national champion UCLA Bruins, were done in by an unkind crossbar and a single defensive lapse as they again failed to score falling to the Waves by a 1-0 final.

Maryland, wearing white uniforms, had the game's opening possession and created a bit of an early chance when Shannon Collins fed Sarah Fichtner streaking down the left side but the Waves' defense collapsed on two Terps in the box and easily thwarted the threat. Though Pepperdine managed one penetration into the box, the squads mostly exchanged possessions in the midfield for the first ten minutes or so.

Pepperdine had the contest's first real chance in the tenth minute working the ball into open space about four yards from the Maryland goal. However, the pass was a bit off the mark and Ally Holtz pushed her shot wide. This seemed to energize the Waves and they began to assert themselves a bit more maintaining several minutes of possession in the Maryland end and earning corner kicks in the fourteenth and fifteenth minutes. The first didn't yield a shot and the second resulted in a header by Lynn Williams that sailed harmlessly high.

The Terrapins' finally responded picking up their first corner kick of the season in the nineteenth minute. Shannon Collins served a well struck ball that was tapped over the goal by Waves' goalkeeper Hannah Seabert. Riley Barger played a short ball on her corner to Aubrey Baker who fed Shannon Collins. Collins' shot, the first of the season for Maryland, sailed well high.

Maryland maintained the pressure with Shade Pratt winning a ball deep on the right side. A misplayed ball by the Wave's defense led to a golden opportunity for the Terps. The ball landed at the feet of Cory Ryan in space ten yards in front of Pepperdine's goal but her shot hit the crossbar and the game remained scoreless.

Pepperdine developed another chance in the twenty-fifth minute as Williams got inside defender Erika Nelson. The junior defender pushed Williams farther to the right than she would have wanted to be forcing a wide shot from the senior forward. Williams had another great chance in the thirty-eighth minute getting behind the Maryland defense but she was unable to cleanly corral the long looping pass and again pushed her shot wide left.

The Waves would finally break through in the forty-first minute. After Shade Pratt made a long run into the offensive zone, the Waves picked off an errant pass and Amanda LaCave found Taylor Alvarado behind the Terrapins' defense. The sophomore took the ball down the middle of the field facing a one on one chance against Maryland goalkeeper Rachelle Beanlands. She was able to squeeze her shot from 12 yards just inside the left post.

Neither squad would threaten again. For the half, Pepperdine out shot Maryland 7-4 with only  and had three corner kicks to the Terrapins' two. The half ended with Maryland trailing 1-0.

Pepperdine opened the second half with possession and immediately put the Terps under pressure. Colby Carson launched a long looping shot that Beanlands easily gathered in for her first save of the afternoon. Maryland eventually regathered for an attack and created some chaos just inside the eighteen yard box. The ball squirted free from a four person mini-scrum to Riley Barger who drove a relatively soft grounder toward the left post that Seabert easily saved.

The Terrapins, playing with some urgency, continued to maintain pressure on the Waves with long possessions in the offensive half. The Terps failed to develop any real challenges in the flow of play and while they also picked up two early corner kicks, they again couldn't capitalize on those opportunities. Additionally, in their anxiety to press forward  the Terps were flagged three times for being offsides in the first 18 minutes of the half.

Although Maryland maintained the lion's share of possession they were unable to mount any significant threats on goal and the Waves occasionally pushed the Terps into their own third. In the seventy-third minute, Shannon Collins nearly got the unintentional equalizer for Maryland. She launched what appeared to be a long centering attempt from about 35 yards on the left sideline. The ball kept drifting toward the goal forcing Seabert to tap it wide and Maisie McCune's shot sailed over the goal.

Redshirt freshman Alex Anthony goat another scoring chance for the Terps when she launched a shot from about 30 yards that Seabert again punched over the goal. As with Collins' shot, Maryland failed to capitalize on the ensuing corner kick.

Pepperdine finally built up a trio of counter attacks as the clock ticked under ten minutes earning two corners and launching several shots that missed the mark high and wide. The Terps mounted one last challenge. With about two minutes to play, Sarah Molina blasted a shot from the right side that curved toward the left post. However, Seabert had a clear look at the shot and was able to make the save. 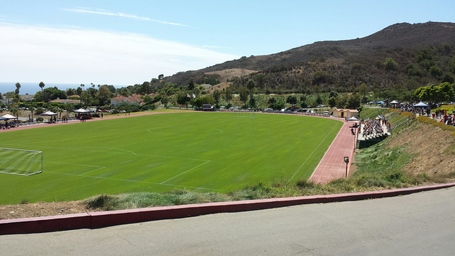 The Waves were able to run out the clock with no further threats from the Terps. Maryland returns home to face William and Mary Thursday night in College Park. Kickoff is scheduled for 7:00 pm.