Share All sharing options for: Profiles in Terpage: Sarah Sprink 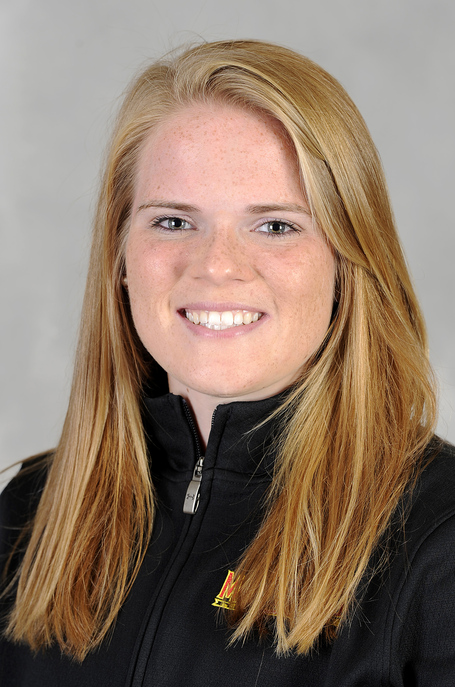 Sprink came to Maryland after being a member of Germany’s Under 21 National Team. In fact, she missed the first four games of her freshman campaign playing in the Eurohockey Junior Championship. Sprink has demonstrated natural leadership abilities as shown by her teammates electing her as tri-captain in both her sophomore and junior seasons. Only considered Maryland.

Anchors Maryland’s defense while becoming the Terps’ most effective scorer on penalty corners and fills the void left by All-American Ali McEvoy’s graduation.

Coming off a season in which she was named a third team All-American, Sprink will need to assume an even greater leadership position on Maryland’s back line because of the graduation of All-American Ali McEvoy.  Also look for her to take on a larger role in Maryland’s set pieces and to score off penalty corners.

1) Other than teammates and coaches the best thing about being at Maryland is: The beautiful campus with its diverse student body.

2) The workout or drill I love to do is: Competition day. (The day before a game we play many little competitive games to get us fired up for the game the next day.)

3) My favorite pregame meal is: Anything the UMUC Marriott cooks for us!

4) My pregame ritual or superstition is: My hair needs to be done correctly or it will bother me the whole game.

5) The best or most meaningful on field moment I've ever had is: Winning the 2013 ACC Championship against North Carolina. We left the conference with a bang.

6) The best or most meaningful off field moment I've ever had is: A visit from my Mom in my freshman year.

8) If not field hockey, then: Soccer

9) I go to as many Maryland men's and women's soccer games as I can.

10) If people know only one thing about me, I'd like it to be: I'm dedicated to the game of field hockey and to the people I care about.