A preview of the upcoming UMD Women's Soccer season.

Last Season: The Terps finished a disappointing 10-10-0 (6-7-0 in conference play) and missed the NCAA Tournament for the first time in four years.

The Terps are now in the Big 10 Conference and while the ACC might still arguably be the toughest conference in women’s college soccer, the Big 10 is no cakewalk. Of the 14 teams in the conference, 9 (including Rutgers who played in the Big East last year) made it to the NCAA Tournament last season. That means that the Big 10 is very deep and there are no easy nights on the schedule. The Terps were picked to finish third in their first B1G season behind Penn State (who has won 15 of the last 16 titles) and Wisconsin. However, the coaches picked the Terps to finish ahead of defending Big 10 Tournament champion Nebraska and Michigan, who made the Elite Eight last year.

The Terps’ last three games are all on the road and they could have major title implications. On October 24th, they head to Minnesota. Two days later they travel to Wisconsin. In their regular season finale, Maryland goes up against Penn State in State College on October 30th. That brutal road stretch contains two games in three days and three games in a week. Conditioning will be key for the Terps as they close out their season on the road with a possible Big Ten title on the line.

Last year, Maryland’s attack and scoring output boiled down to one person, Hayley Brock. She scored 12 of Maryland’s 35 goals last year. Brock has graduated and Maryland’s second best scoring option, Ashley Spivey, has transferred to Central Florida. That is a huge blow to the Maryland offense. Spivey was second on the team in goals and points last year. The Terps do get Gabby Galanti back from injury but she has only made three starts in her career thus far.

The attack is by far the weakest part of the Maryland team going into this season. They have the least fewest combined starts of the three lines and they have almost no experience playing on the pitch together and this isn't the only potential pitfall. Over 50 percent of the goal production from last year is gone and the Terps were shut out six times last season. That cannot happen again if Maryland expects to have any chance of making the NCAA Tournament this year. One big positive for the Maryland offense is that they should have an outstanding defense behind them. If Maryland can score one or two goals in a game, that may hold up against most of their opponents.

Cory Ryan will have to step up for the Terps to have a chance to win the Big 10 title in their initial campaign. Ryan was fourth on the team in goals last year but only made two starts. With Brock and Spivey gone, Maryland is going to need to share the load when it comes to scoring goals. The bulk of that scoring responsibility is likely to be put squarely on Cory Ryan’s shoulders. She has a great first step and very good speed. Ryan has been a spark plug off of the Maryland bench for years. Now in her senior year, it is her time to lead the team.

Maryland returns all three of their starting midfielders from 2013 in Aubrey Baker, Riley Barger, and Lauren Berman. Baker and Barger are upperclassmen now with a couple years of experience under their belts and Berman is a sophomore. This experience may be their greatest strength. Barger and Baker have played together for two years and they have one full season of playing together with Berman. One of the glaring weaknesses for this group however is shot selection. Of all of the players who scored a goal for Maryland last year, Berman and Barger had the second worst and worst shot percentages on the team. As a freshman, Berman shot a mere 3-29 (.103) and Barger was even less accurate finding the net only once in 22 tries (.045) . Baker by comparison had the second highest shooting percentage (.214) of all goal scorers. This Maryland team can ill afford to waste scoring chances, especially when their top goal scorers from last year are gone. The midfield will have to step up their scoring in 2014 because seven goals between the starting three midfielders will not be enough. 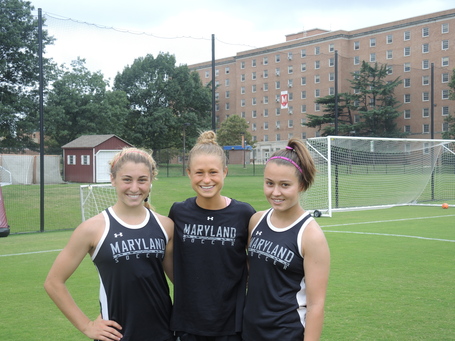 Lauren Berman was third on the team in goals, assists and points last season. She will have to improve on that production now that the midfield will have more pressure on it to create and score goals with the absence of Brock and Spivey. Maryland can’t afford a sophomore slump from Berman because after a great freshman season where she started 17 of the 20 games she played in, she will be asked to do even more this year.

Maryland’s strength in 2014 should come from this unit. Shannon Collins and Erika Nelson have each started for two years as they head into their junior seasons and Shade Pratt started 13 of the 18 games she played in last year. Nelson is a match-up nightmare for most forwards because of her combination of size and speed and she has gotten better every season. The New Mexico junior should continue to be a dominant force in 2014 as she anchors the middle of the Maryland backline. Goalkeeper Rachelle Beanlands started all but one game in both her freshman and sophomore years. She is without a doubt one of the best goalies in the Big 10 and likely one of the best in the country. With Beanlands in goal and with an experienced backline, Maryland should be in every game this season. The Maryland defense will be called upon to do the heavy lifting in 2014 but if the offense can put up a couple of goals per game, the defense will make it stand up and Maryland will win a lot of games.

Shannon Collins led the team in assists last season with six. She is also Maryland’s set-piece specialist. Maryland has very good size so scoring off of set pieces will be a major key for the team. Although the Terps didn't do a good job of scoring off of set pieces last year, if Collins’ crosses are on target, expect to see Maryland return to their usual form of playing well with the ball in the air.

Wrap-up: There are a lot of question marks surrounding the offense with the forwards but the midfield is solid and the defense should be one of the best in the conference. The Terps were bitten by the injury bug last year but if they can stay healthy, expect to see Maryland in the hunt for the Big Ten title this season.