Why is Maryland's basketball team all growing beards?

Shock waves were sent through the Maryland, nay world, basketball community this afternoon when the Terrapin basketball team started releasing leaked photos from a recent shoot with the new team. I, as a real journalist, immediately leapt into action to see what I could decipher from these images. The findings may shock you.

The picture that garnered the most attention was that of the five-man incoming class, ranked in the top ten nationally.

On the surface it seems like a great picture of an excited group of youngsters ready to leave their mark in Maryland basketball history. But when you look deeper, you can see schisms already starting to form. They start small and stubbly but grow into lush waves of trouble.

You can clearly see that the most highly touted of the group, Melo Trimble, is sporting a a somewhat full beard that he's obviously been cultivating for some time. We see proof of this is a recent tweet from the future point guard. Jared Nickens, a top 100 recruit in his own right, also seems to be growing facial hair, although more cleanly trimmed and understated.

The other three freshmen have nary a wisp to be found. What does this say about their chemistry? Obviously Trimble, the supposed future leader of the program, does not have the respect of the group. Would Derek Jeter or Michael Jordan let this happen? You tell me.

The issues are future illustrated when we look at more pictures of the team.

Get ready... A new era of @TerrapinHoops is coming... pic.twitter.com/mwgMLXAjMs

THEY ALL HAVE BEARDS. Now, you might be saying, "Andrew, that's not the whole team, what about Evan Smotrycz?"

So, what's the deal Michal Cekovsky, Dion Wiley and Trayvon Reed? Why are they blatantly flying in the (bearded) face of Maryland basketball?

Cekovsky and Reed tower over the rest of the team at a combined 14-plus feet of height and can likely only see the tops of their teammates heads, living woefully unaware that the beards exist.

It's clear to me that the recent tournament drought for Terp hoops is a direct result of a lack of beard-chemistry from the entire team. For this squad to make it over the hump, they'll have to throw away their razor, flush their foaming creams and fully embrace the beard lifestyle.

Let's not forget the last time Maryland was successful: 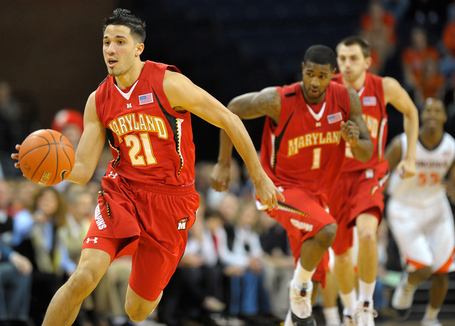