Know your B1G foe: Counting down Maryland's move to the Big Ten: Michigan

As Maryland counts down the days until the school’s official move to the B1G, we’re getting to know our future conference foes one school at a time. Today, we preview Michigan.

Share All sharing options for: Know your B1G foe: Counting down Maryland's move to the Big Ten: Michigan

We’ve been in the ACC since forever. Tell us which ACC school this is most similar to and why.

Michigan is ranked as the 28th best school in the U.S. News and World Report rankings. The closest ACC school would be North Carolina at 30th.

In athletics, Michigan is also extremely similar to North Carolina in terms of total National Titles. There are discrepencies in terms of some of those old titles in some sports, which Michigan recognizes but aren't necessarily recognized by the NCAA as being "official."

Michigan is also similar to North Carolina in that it's like the older brother of another school with "State" in their name, but doesn't consider that school to be their primary rival. Michigan'w primary rival is obviously Ohio State and Michigan State is their N.C. State.

The Big House. Michigan Stadium. 109,901 is the official capacity, but it has held over 115,000 for some games. It's the largest capacity stadium in the U.S. and is an amazing site to see in person. Most of the stadium is below ground, so when you walk up to it,  you don't understand how big it truely is until you look down into it.

I've been to Michigan Stadium (as you can see below) and can say it's an awesome place to see a football game and is nothing like I've ever experienced before.

Michigan's indoor practice facility is also the largest of it's kind in the World, according to Wikipedia. 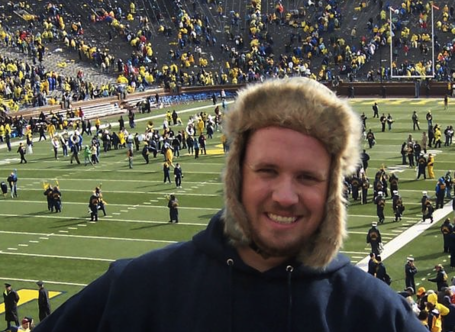 Michigan's basketball teams play in the Crisler Center, which holds 12,721 and was built in 1967.

In terms of other facilities, Michigan sure does have a lot of them. Go check all of them out.

Michigan fields 27 teams, 13 in mens and 14 in womens. In men's sports they have: baseball, basketball, cross country, football, gymnastics, golf, ice hockey, lacrosse, soccer, swimming and Diving, tennis, track & field, and wrestling. In women's sports, they feature the same teams except for baseball, football and ice hockey, but do have field hockey, rowing, volleyball and water polo on the women's side.

Ann Arbor is an awesome town. On Saturdays that feature a Michigan home game, the entire town basically shuts down for the day. It truely is remarkable.

There are a lot of awesome places to check out, from a food perspective.

From a beer perspective, Arbor Brewing Company is nice, as is the Jolly Punpkin, Grizzly Peak, Blue Tractor BBQ & Brewery, and Wolverine State Brewing Company. And of course the state of Michigan is also home to Founders Brewing Company, which makes one of my favorite beers, The Founders Breakfast Stout. Now you know why Michigan's SBNation site is named what it is.

In my humble opinion, if you want to visit a B1G school this year, you can't go wrong venturing out to Ann Arbour. You can drive or hop on a plane to Detroit and rent a car and make a quick 45 minute drive.

Michigan has Ohio State as their primary rival, followed by Michigan State. The Wolverines are in Maryland's East Division, so they'll be facing them on an annual basis in football, but if a rivalry is going to develop between these school, it will probably be in basketball. Maybe they can create a new trophy - the battle for the right to use the "M" logo.