As Maryland counts down the days until the school’s official move to the B1G, we’re getting to know our future conference foes one school at a time. Today, we preview Ohio State.

Share All sharing options for: Know your B1G foe - Counting down Maryland's move to the Big Ten: Ohio State

We've been in the ACC since forever. Tell us which ACC school this is most similar to and why.

Either Florida State or North Carolina. Florida State has less in common with Ohio State than UNC does, but FSU and OSU are very similar in their commitment and love for their football programs. At both schools, the football team is the team of the school and the city, and the success of the football team is the absolute, most important thing. The expectations are extremely high, money is abundant and the passion is fierce.

Otherwise, North Carolina is the more suitable comparison. Ohio State football and North Carolina basketball are equivalent giants in their own sports and are similar in their importance to their school and community. Academically, OSU and UNC are more comparable, and both are known for having a lot of old, wealthy alumni attend their games. Both teams hold power within their conference, although North Carolina seems to have more in the ACC than Ohio State has in the Big Ten. The Tar Heels and Buckeyes are each half of the biggest rivalry in their respective conferences and perhaps the biggest rivalries in their entire sport. They've both even gotten in trouble in the recent past with the NCAA.

Let me phone a friend about this

Our new B1G pal Matt Brown at Land-Grant Holy Land, SBNation's excellent Ohio State blog, gives us their answer on what ACC school they're most similar to:

Holistically, I think it's North Carolina. The unrealistic UNC hoops expectations mirror that of OSU and football, both schools are strong in a wide array of sports, and UNC is probably a better academic comparison to Ohio State than Florida State (although their football fanbases are very similar). Ohio State has a similar level of prestige within the Big Ten that UNC enjoys in the ACC as well.

Ohio Stadium plays host to Buckeye football. Built in 1922, the Horseshoe, or ‘Shoe, is one of the biggest stadiums in college football, holding 102,329. It is one of the premier venues of college football and produces some of the sports' best atmospheres. A trip to Ohio Stadium is a must for any college football fanatic. A warning for visiting fans, though: while night game atmospheres are the rowdiest and best Ohio State has to offer, those are also the games in which the most obnoxious and rudest fans come out. If you go to a night game and are wearing another school's apparel, you can expect the worst members of the Ohio State fanbase to attempt to heckle you. 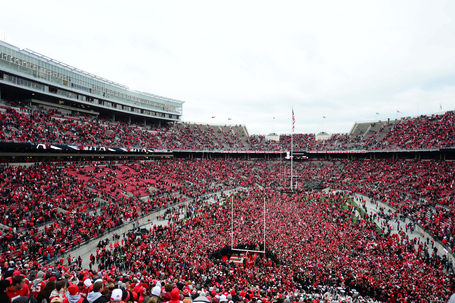 Ohio State basketball plays their ball at the Schottenstein Center. Affectionately known as the Schott, the stadium is also officially called the Value City Arena. The Schott opened in 1998 and seats 18,809. The atmosphere at games is typically not as wild as one might expect for a program with the prestige of Ohio State's, and this can be attributed to how massive Ohio State football is. For big games, though, when the university puts the students along both sidelines instead of the old, wealthy alumni who aren't too vocal, it can get loud. The arena is a very nice one, and it's a nice place to watch a game, but taking a trip to the Schott is not as necessary as taking one to the ‘Shoe.

Non-revenue athletics: In 2013, men's tennis at Ohio State secured a 10-year home winning streak, which is the longest home winning streak in all NCAA sports, and have been excellent in the Big Ten during that stretch. Women's synchronized swimming has won 27 national championships, all since 1977. The most recent Ohio State national championship came from the women's pistol team in 2014, their sixth since 2000. Ohio State men's lacrosse has made the NCAA Tournament four times since 2003 and most recently in 2013. They will be one of the few B1G teams competing in lacrosse against Maryland and have shown their program is growing.

I was born and raised in Columbus about 10 minutes from Ohio State's campus, so I have some input I can give. As far as places to eat, Dirty Frank's and Late Nigh Slice are two places I think visitors need to check out. They're both located in some of the best areas of Columbus, they're open late and provide some of the best food in the city for the best price. Adriatico's is also a nice pizza place near the university that will give you a good feel for the OSU campus. Columbus is known for its ice cream and frozen custard, so if you visit you have to take advantage. Whit's is the best place for frozen custard, and for ice cream, Greater's and Jeni's are good options depending on what you want (Jeni's has more exotic and interesting choices, but be prepared for the expensive prices).

As far as the city goes, Columbus is home to one of the best zoos in the world, one of the most vibrant shopping centers in the country in Easton and has some great areas visitors should check out. The Short North is one of the best neighborhoods Columbus has to offer, and for older visitors, German Village is probably somewhere you might appreciate. Columbus is the ultimate mix of a college town and a big city.

We also asked Matt Brown to give us the best food locations and tell us what is awesome about Columbus:

I haven't lived in the area since 2009, so I might not be the best guy to ask, but I love the Thurman Cafe, Whit's (GRANVILLE STAND UPPPPP), Adriactico's, and Bodega, which is in the Short North. Visitors to Columbus should enjoy the Arena District and the Short North (and if they're older, maybe German Village), and should probably avoid the area near the fairgrounds (Summit, 4th, etc).

Columbus is a pretty big city, despite still very much being a college town. It has a superior zoo, solid museums, good live music (sup, Newport), and a lot to keep anybody busy for a weekend. Maryland fans will enjoy the trip, as they will to most B1G towns. There aren't that many total clunkers out there.

It'll happen, but mostly from the Maryland side. Ohio State is already much too concerned with Michigan to barely notice Penn State, and they hate the Buckeyes with a passion. If Maryland can knock off Ohio State a few times in football and ruin some seasons, then the hate from Columbus will come, but for Ohio State to have a true rivalry and hatred with another school, it has to has its roots in football and work outwards. Simply beating them in basketball will cause minor annoyances, not a rivalry. That being said, Maryland fans will love to hate Ohio State. Pretty much everyone in the Big Ten already does, so Maryland fans won't be out of place for doing so. Other than Rutgers and Penn State, Ohio State will be the next closest school, the Terps will play them in football every year and games between the two in basketball could create classics. There could be something there, but it will be more one-sided than anything else.