Today's Ball brings us back to the "we were good at football until we joined the ACC" corner of the conference, where Virginia Tech and BC also reside. Miami used to be a prolific and polarizing powerhouse who you couldn't take your eyes off. Now they're ... I don't know what they are anymore, so let's investigate!

Remember how you felt every time you were watching a Maryland road game over the past year and the fans started shouting "A-C-C! A-C-C!" in unison at the Terps? It's time for the Testudo Times crew to respond! Moving along alphabetically, it's time to set our sights on "The U." We're just asking: does that stand for "U"sed to be a good football program?

FlaTerp: All of them. They're all awesome, upstanding people. Someone just handed me a suitcase with $100,000 in it in exchange for taking it easy on the ‘Canes. I can't wait until we get to UNC -- I heard their hush money figure is even higher! OK, OK, if you force me to actually pick someone, I'll take the late Sean Taylor, a hyper-athletic safety who could really lay the lumber too. He was a special college player who could've had a long and exciting NFL career. Sad story, so maybe I'll take The Rock instead. Who doesn't like him?

Todd: Well, I'd have to say Shenise Johnson. Though a bit shorter, she was to Miami what Alyssa Thomas was to Maryland. Without looking into it, I'd say she's probably top five at Miami in scoring, rebounds, assists and steals. Always gave 100 percent.

Grant: I've always had a soft spot for the Clinton Portis and Frank Gore two-headed monster. Although Gore scored a six on his wonderlic and Portis had the most outrageous outfit tradition in the NFL, these guys were talented and their game only elevated when they got to the next level. I also liked Shane Larkin too, partly because his dad was my favorite player in the 1998 Major League Baseball Nintendo game.

Pete: While I do like Grant's reasoning behind his Shane Larkin pick, I'm going to have to go with Andre Johnson here. He was an unbelievable talent that stood out on a Miami squad chock-full of them.

Andrew: I work with Gino Torretta sometimes and he's a really great guy, so I'll go with him.

Dave: As a Ravens fan, I have to say Ed Reeeeeeeeeeeeeeeeeeeeed. Such an amazing, instinctive football player. Also a super nice guy to meet in person.

FlaTerp: Ray Lewis. Sorry, all you Ravens fans out there. How do you go from cutting a shady deal to escape double-homicide charges to being the most beloved man in the NFL?

Todd: I think I'd have to say Shenise Johnson because her play was, in large part, responsible for Miami beating the Terps four straight times in 2010-2012. Second on the list would be Mia Brennan who took a cheap shot at Hayley Brock late in a soccer game in 2012 that when Brock responded got her a red card keeping her out of the next game against Florida State.

Pete: I'm going to throw Jeremy Shockey into the mix here, who reportedly threw a temper tantrum to get out of New York.

Andrew: C'mon the only answer is Ray Lewis.

Dave: You all hatin' on Ray Ray are the worst. The prosecutor admitted he was basically trying to make a name for himself.
But seriously, is there really a Miami player we should hate from a Maryland perspective? Miami is such a forgettable team to me.

FlaTerp: I was just 14 when Frank Reich engineered what was at the time the greatest comeback in college football history in 1984. Reich, for you young readers, was near the dawn of Maryland's "Quarterback U" era, right after Boomer Esiason. Miami was in its absolute prime and rode the passing of Bernie Kosar to a 31-0 halftime lead. Reich, who was actually Stan Gelbaugh's backup at that time, came in and threw 6 second-half TDs, the Terps outscored Miami 42-9 and won the game 42-40. One of the great wins in Maryland football (and college football) history.

Todd: FlaTerp has this one right on the nose. The astonishing thing is that two weeks later Miami lost to BC on Doug Flutie's Hail Mary and this game was completely overshadowed. The other side note to this is that Reich went on to engineer what was to that time the greatest comeback in NFL (playoff?) history when he brought the Bills back from (I think) a 35-0 halftime deficit to beat the Oilers. 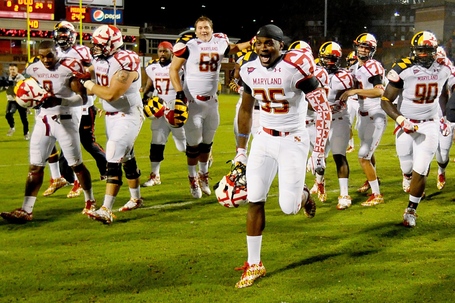 Shhh, don't tell them how the season turned out. Photo by Evan Habeeb, USA Today.

Grant: When Maryland debuted their pride uniforms and got the upset win over Miami in the 2011 season opener. It was funny seeing ESPN spending more time analyzing whether they liked the jerseys or not (how could you not like those jerseys?!) instead of analyzing the huge win we picked up.

Pete: I agree with Grant here -- I was at that game, and it certainly tricked me into thinking the 2011 season was going to be a heck of a lot more successful than it was. The Pride uniforms certainly announced the team on a national scale, but it was a win against a Miami team that we later found out was a lot weaker than usual. Still -- it's one of just two wins from that season, so I'll savor it.

Andrew: I wish I could be original here, but the best overall game was The Comeback and the best I've been around for was The Pride Uniform Game. This has been way too easy so far.

Dave: Definitely the Maryland Pride game in 2011 on Labor Day, national stage, on ESPN. The bad part about that game? It was the highlight of that entire season.

FlaTerp: Me neither, but Maryland leads Miami 9-8 in the all-time football series, which is way better than I would've thought. So take that, Miami. You aren't so bad. Every time Maryland lost to Miami in basketball, it sucked. They just feel like a team you shouldn't ever lose to. So all the basketball losses are my "games to forget," except I already forgot them.

Andrew: Every basketball loss ever in Coral Gables. WHY CAN'T WE WIN THERE!?!?! IT MAKES NO SENSE.

Dave: All the freaking losses to them in men's basketball. Maryland should never lose to Miami in basketball. But if there are no fans at the game, does the loss actually count?

Miami is the National Champion in announcing attendance figures that are either completely inaccurate or take into account the number of Twitter followers they have.

Grant: The only thing I like about Miami is Jim Larranaga.

Pete: Miami has one of the most successful football programs in recent memory, recently won a completely unexpected ACC title in basketball and still can't get fans to come to the games. My friend Bud Elliott over at Tomahawk Nation refers to them as an "e-fanbase," and he's completely right -- Miami fans only come out of the woodworks from behind their keyboards.

FlaTerp: Yeah, their turnout isn't good, especially from the student body. You can always find pathetic aerial shots from Miami games in which there's like 467 people at Sunlife Stadium. Another way to look at that number is that it's about one-tenth of the amount of combined NCAA scandals, poor character guys, and criminal cases the Hurricanes have rolled up in the last 25 years.

Andrew: You're a once proud football program that had one of the best 20-year runs in history and are now a second tier ACC program behind FSU, Clemson and...uh....Duke? Amazing what happens when all of the best players in Miami realize they can go somewhere besides a small, private school that can't fill it's crappy, run down stadium. Oh, and your coach perpetually looks like a 7th grader on picture day.

Dave: To build more off what Pete said, Miami is the National Champion in announcing attendance figures that are either completely inaccurate or take into account the number of Twitter followers they have.