Know your B1G Foe - Counting down Maryland's move to the Big Ten: Minnesota

As Maryland counts down the days until the school's official move to the B1G, we're getting to know our future conference foes one school at a time. Today, we preview Minnesota.

Share All sharing options for: Know your B1G Foe - Counting down Maryland's move to the Big Ten: Minnesota

We've been in the ACC since forever. Tell us which ACC school this is most similar to and why.

Minnesota ranks 69th in the U.S. News' 2014 rankings, tied with Virginia Tech and a few spots below Clemson, Syracuse, Pittsburgh and Maryland. The Gophers haven't won a Big Ten football title since 1967, so that rules out Virginia Tech and Clemson. We'll go with Pittsburgh, even though they won a Big East football title semi-recently -- the Gophers are a traditional football school that have had a resurgence on the basketball side of things (not as drastically as Pitt, but comparably), leading to a confusion of culture of sorts.

The football team plays at TCF Bank Stadium (also known as "The Bank"), a new on-campus stadium built in 2009 that will also house the Minnesota Vikings for the next two seasons. It holds 50,805 fans and is the newest power conference football stadium in the country -- it's probably worth checking out if you can take the road trip. 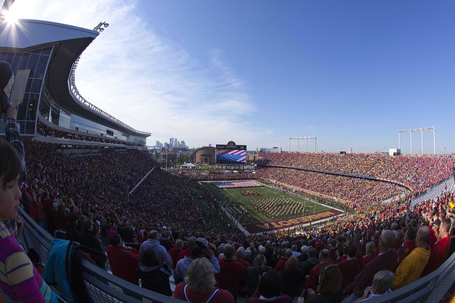 Basketball plays at Williams Arena (also known as "The Barn"), originally built in 1928 and since renovated a few times. It holds 14,625 fans, and at one point had the highest capacity of any college basketball arena in the nation.

Ice hockey, both men's and women's, is the big thing for the Gophers -- something Maryland is completely unfamiliar with. Volleyball and wrestling are also strengths, but Minnesota also has solid swimming, track, women's basketball and baseball programs.

Minneapolis is quite possibly my favorite city in the nation -- I used to visit family friends there as a kid, and went back a few times in college. It's big without being too big, and there's plenty of stuff to do while still maintaining a friendly atmosphere.

From our friends at the Daily Gopher, some Minnesota terms to know:

A quick explanation of a few key University of Minnesota terms:

Not very. Different football divisions, for starters, but it's quite a ways away from the Terps, with plenty of potential rivalry schools in between. Wrestling and volleyball could see some interesting clashes, and the athletic departments are at a pretty similar spot with regards to the big revenue programs, but it's hard to see Minnesota turning into a legitimate rival.