Remember how you felt every time you were watching a Maryland road game over the past year and the fans started shouting "A-C-C! A-C-C!" in unison at the Terps? It's time for the Testudo Times crew to respond! Moving along alphabetically, it's time to bid adieu to our friends in Atlanta, Georgia Tech.

Pete: Robert Carter, Jr.. I can say Robert Carter, Jr., right? I'll go with Calvin Johnson, however. He's one of the five best talents I've ever seen at the collegiate level, combining an insane array of skills with a complete lack of a talented quarterback to throw it to him while with the Yellow Jackets.

FlaTerp: Yeah, Todd, we're old. I'm going with Kenny Anderson, the king of the NYC playgrounds, who never lived up to the hype at the NBA level but was a joy to watch when he was still just a pup at GT. 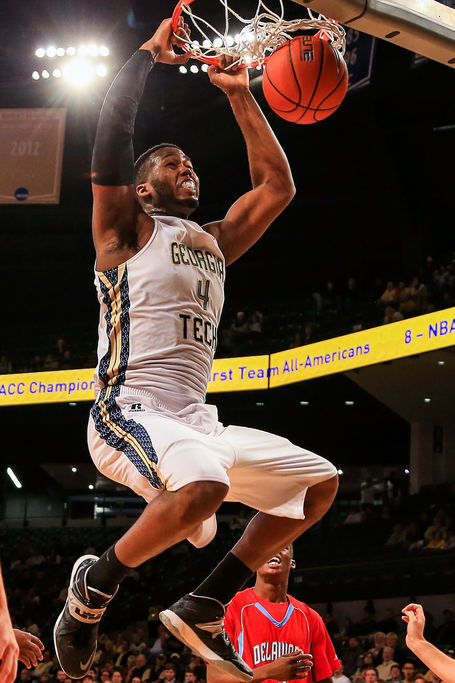 Dave: I always liked Jarrett Jack, even though he was a local kid who didn't pick Maryland. He was a great player for Tech and helped them get far in the 2003-04 tournament.

Grant: I'm with Dave on this one. Jarrett Jack was a solid leader who was a major contributor to their  runner up performance to UConn in ‘04. He had an amusing shaped head as well.

Pete: Glen Rice, Jr. He always hit inordinately big shots against the Terps, and seemed to always be the guy that hurt you in late game situations.

Todd: Rick Barry or whichever of the Barrys that played at Tech. The only Barrys I like are Dave and White.

FlaTerp: Bobby Cremins. No, he wasn't a player, but I don't care. He was a crybaby of a coach.

Dave: Since FlaTerp didn't pick a player, I'm not either. I'm picking the genius at Georgia Tech who decided it was a good idea to park Maryland's band buses ON Tech's frat row and have us march back to them after beating Tech in OT in 2001 in football.

Grant: I loathe Chris Bosh, although he does make me laugh.

Pete: It has to be February, 2010 -- Cliff Tucker's Shot, which I wrote about extensively here. I was at the game as a student, and it's one of those sporting moments I'll never forget.

Todd: (I'm going with 2) February 3, 2011 Maryland 56, GT 53. This is the infamous power outage game. Maryland trailed by 5 with under 5 minutes to play and came back to lead 53-52 with 2:22 to play. Ten seconds later the power went out at Alexander Memorial Coliseum and caused a 25 minute delay. Tech tied the score but the Terps pulled it out on a buzzer beating three pointer by Kim Rodgers.

FlaTerp: It was 1988 and I was a wide-eyed (red-eyed? shadowy-eyed? They probably weren't all that wide, to be honest.) freshman in my first few weeks on campus when Bobby Ross met Maryland for the first time since he left us behind in a highly questionable career move. The Terps handed whatever-georgia-tech-is-called a 13-8 loss thanks to a Ricky Johnson TD and two field goals by Dan Plocki, the second of which came late in the game to pretty much seal it and led to a drunken "Plocki!!! ...  Plocki!!!!" group chant from the depths of my miserable bomb shelter of a wing in Ellicott Hall. Plocki was a pretty good one, by the way, as far as Maryland kickers go. The Terps have had far, far, far worse.

Andrew: Can't and won't get creative here: the Cliff Tucker shot. Also, for those too young to remember, Greivis hit a half court shot a second before that shot, but it was called off because Keith Booth called a timeout.

Dave: You're probably wondering about my answer to the previous question; What the heck is Dave talking about? In case you don't know, on October 11, 2001, Maryland was a surprising 5-0 and traveled down to Atlanta to take on the #15 Yellow Jackets. It was the Thursday night game of the week and head coach Ralph Friedgen wanted the Maryland band there to help root on the Terps. It turned out to be a great game and ended with freshman Nick Novak hitting a 50 yard field goal in OT to upset Georgia Tech, as Maryland improved to 6-0 on the season. Someone handed out 6-0 signs to the Maryland faithful in attendance and we all danced around in celebration. Then it came time to leave.

The Tech fans were none too pleased about Maryland beating them. They also weren't very happy about Maryland's band marching (trucking) around outside, playing the Victory song. At one point, some guys actually attacked the band, ripping apart several uniforms and turning one of our trumpets into a Dizzy Gillespie trumpet. Here is a nice article summarizing the events from that evening.

Grant: Easily the Cliff Tucker three to win it. I know it's been said, but I remember being really mad for about .8 seconds that Vasquez wasn't the one with the ball (hell I would have settled for Hayes too). My anger subsided when Tucker sunk the buzzer beater.

Pete: I know this isn't a real answer, but every game besides the Cliff Tucker buzzer beater. I don't know if I'm the only one, but Georgia Tech has to be the most forgettable conference opponent for me in the entire ACC. It probably has something to do with the different divisions in football, the lack of recent basketball success and the widely different cultures between D.C. and Atlanta.

Todd: Sunday May 25, 2014 GT 9, Maryland 4 Just because it would have been so sweeeeeeeeet to win the ACC baseball championship on our way out the door.

FlaTerp: 2006. Georgia Tech 27, Maryland 23. The Terps connected on a Hollenbach-to-HeyBey bomb with under a minute left to set up the potential winning score, then took back-to-back sacks in the red zone to lose it. It was a good Tech team led by Megatron, Choice and Ball, who all played well that day, but the Terps should've won that game and gave it away with a poor defensive fourth quarter.

Andrew: I don't remember the exact date or score, but just about a week after Maryland beat #2 Duke in February of 2013, they lost at Georgia Tech to basically knock them off the bubble for good. Had they won that game, I think they sneak into the NCAA tournament that year and the Mark Turgeon narrative is much different. By the way, guess who had his best career game and decimated the Terps in that game? A freshman named Robert Carter Jr. Funny how things work out.

Dave: October 7, 2006. Maryland was playing at Tech, who was ranked 18th at the time. They had a 23-14 lead heading into the 4th quarter and let it slip away.But like Pete said, Tech is one of those schools that, aside from a few occasional games in each sport, they were just there.

I know one guy who went to Georgia Tech, and he's pretty cool. The rest of you? I'm pretty sure you're ALL NERDS.

Pete: I know one guy who went to Georgia Tech, and he's pretty cool. The rest of you? I'm pretty sure you're ALL NERDS. Also, that whole making a bowl every year since 2008 is cool and all, but Maryland still has more bowl wins in that period. Winning six games a year isn't exactly backbreaking in the Coastal Division.

Andrew: Georgia Tech is the last school I think about when listing ACC teams. I have no opinion of them.

Dave: ^^^^^^^ - What Andrew said. I always named the ACC schools and was like "Who am I missing? Oh, Tech." I'll say this - the two best Maryland sports memories I have about the city of Atlanta both don't involve Georgia Tech; The Natty in basketball in 2002 and the Peach Bowl victory against Tennessee in 2003.

So long, GT. You're Tech-nically in the ACC, but no one cares about you.

Grant: That was a really cool freshman convocation speech and also there's a good hotdog place right off of campus. Other than that, adieu GT.