Know your B1G Foe - Counting down Maryland's move to the Big Ten: Iowa

As Maryland counts down the days until the school’s official move to the B1G, we’re getting to know our future conference foes one school at a time. Today, we preview Iowa.

Share All sharing options for: Know your B1G Foe - Counting down Maryland's move to the Big Ten: Iowa

School name: The University of Iowa

Notable achievements:1939 Heisman Trophy winner Nile Kinnick, who their football stadium is now named after; Split of 1921 football national championship; 13 conference championships in football; Eight conference championships in basketball; 22 appearances in the NCAA Men's Basketball Tournament; Final Four appearances in 1955,1956, and 1980; Played against University of San Francisco in the 1956 championship game for basketball; 23 national titles for the wrestling team, which was named one of the top dynasties of the 20th century by Sports Illustrated.

We've been in the ACC since forever. Tell us which ACC school this is most similar to and why:

Iowa is ranked 73rd in the U.S. News' 2014 ranking of best colleges. Although Pittsburgh at No. 62 is only the second closest member of the ACC in these rankings (No. 69 Virginia Tech), there are several factors that make the Panthers the most comparable to the Hawkeyes. For starters, both schools are historically considered football-first schools with a rich history and future NFL players. However, both have had more recent success in basketball and were both present in this past NCAA Tournament. They even have a similar number of all-time tournament appearances, with 22 for Iowa and 25 for Pitt. 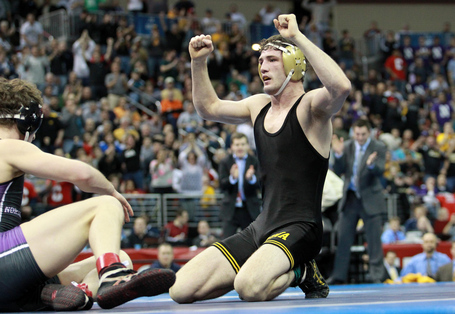 Another heavily-weighted basis for this comparison is the sport of wrestling. Iowa is one of those rare schools where the Olympic sport falls into the mainstream conversation and that's because they have 23 national titles as a team and have produced 77 individual national champions. You're not going find any school that fits that bill in the history of the ACC; the conference has never won a national championship in wrestling. In fact, Maryland would actually be considered the most successful ACC wrestling program in conference history with 24 conference titles (UNC is second with 17). But Maryland is on their way to a much tougher wrestling conference and newcomer Pitt could be seeing this as an opportunity to dominate ACC wrestling for years to come. Pitt was a member of the Eastern Wrestling League from 1975-2013, a wrestling-only conference made up of northeastern schools whose primary conferences don't sponsor wrestling. They won the conference three straight times from 2011-2013. Pitt's wrestling team finished second in the conference in its first year in the ACC.

The football team at Iowa plays its home games at Kinnick Stadium, named after their sole Heisman winner Nile Kinnick. The stadium opened, which opened in 1929, holds 70,585 fans and completed a $90 million renovation in 2006, which included new stands in the south endzone, a new press box, and a statue of Kinnick. Sounds like a nice place. But 900 miles? I think Maryland fans might be better off saving their resources for trips to the legendary 100,000-plus venues of Michigan, Ohio State, and Penn State. Besides, the Hawkeyes come to College Park in our inaugural season, so that's something to worry about later on down the road. 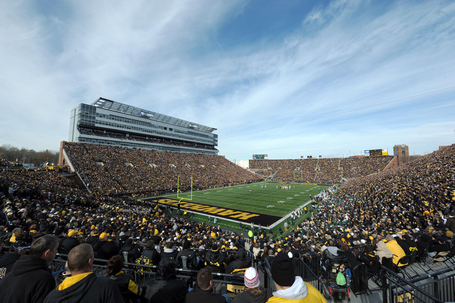 Iowa's men's and women's basketball teams play in the 15,500 seat Carver-Hawkeye Arena, which they share with the wrestling and volleyball teams as well. The arena opened in 1983 and completed a renovation in 2011. There might be more wrestling history in the building than basketball, but watching home games for Iowa's men's team this year made it seem like a place where B1G basketball programs usually have a hard time stealing one. Could be worth a road trip, especially if both of our basketball programs make strides from last year and become contenders soon.

We've already talked plenty in this piece about Iowa wrestling. We get it; it's phenomenal. Let's let them have that one and focus on how the Terps will compete in some other non-revenue sports.

Women's basketball at Iowa also has a rich history, mostly in the 80s and 90s. But these days, it will be hard for them to beat Brenda Frese and company.

Iowa must not care too much about making friends in the B1G, or in their own state for that matter. They already claim four rivals with whom they play trophy games: Iowa State, Minnesota, Nebraska, and Wisconsin.

I wouldn't say a serious rivalry with the Terps is too likely, especially with things starting to heat up in College Park between Penn State coach James Franklin and our head honcho, Randy Edsall. Rutgers is also a popular rivalry choice because of their coinciding induction into the B1G and their proximity.