Go ahead and admit it, you don't like Clemson. Never have, never will, and that's OK. Let's take that ball and run with it a little bit today.

Remember how you felt every time you were watching a Maryland road game over the past year and the fans started shouting "A-C-C! A-C-C!" in unison at the Terps? It's time for the Testudo Times crew to respond! Let's share some memories and have a little fun with all of Maryland's old rivals on our way out the door. Moving along alphabetically, it's time to have a little fun with ...Clemson. (For you Clemson trollers: that's because "C" comes after "B"). OK, let's get started.

Andrew: CJ Spiller and Sammy Watkins. I know this is supposed be Player Hating but gahtdamn those dudes were nice as hell. I remember Watkins returning the punt for a touchdown during the collapse versus them in 2011 and being like, "Well, yeah, that was bound to happen."

FlaTerp: No doubt, it's William "The Refrigerator" Perry. The Fridge was a giant and personable run-stuffer and ended up doubling as a 340-pound fullback in goal-line packages as a pro for the Bears.

Brendan: Full disclosure, I kind of like a lot of the Clemson skill players of the last decade. They are all so good and so fun to watch. If I had to pick one though, well, I can't. So I'm going to make a sleeper pick and say Oguchi Onyewu. One of my favorite American defenders of all time for the USMNT. Also, the staredown.

Todd: Once again, no field hockey, no lacrosse, might as well not have women's basketball, and nobody can work up hate for a soccer player. Gonna pretend there is no Clemson.

Grant: DeAndre Hopkins was loads of fun to watch two years ago when he was Clemson's playmaker. Sammy Watkins filled his shoes but Hopkins set the precedent. I even drafted him to my fantasy team. Needless to say, I didn't have a very good season.

Andrew: Trevor Booker, because until KJ McDaniels came around he was literally the only Clemson basketball player I could name.

FlaTerp: I hated Dale Davis and Elden Campbell equally. They were both huge and good during maybe Clemson's best era of basketball (oxymoron alert!), but the Tigers never amounted to much even with all the talent they had back then.

Brendan: Terrence Oglesby, which is funny because I bet a lot of Clemson fans hate him too. He was in a long line of guys who just scored a bunch of three-pointers against Maryland. He shot a poor percentage against us, but watching him week-in and week-out hit threes and then think he was so much better than college he went overseas... that guy sucks. He's in the Just a Guy Hall of Fame.

Grant: For some reason I really did not like Tajh Boyd last season. All he seemed to throw against us were short, dinky screens to Sammy Watkins. Albeit his stats were good because Sammy is a flat out playmaker, but I didn't seem much stardom in the dude. 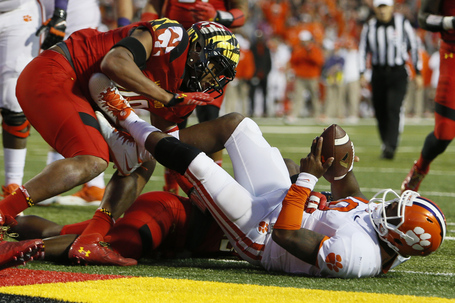 Grant did not like this guy -- he scored a lot. Image via Mitch Stringer, USA Today.

Andrew: I talked about this in the "ACC Memories" series we did, but the 2010 basketball game with the 12-0 run ending in the Greivis Vasquez dunk was the only Maryland basketball game I ever attended with my dad before he passed away.

FlaTerp: Ahhhhh the 2001 season. The Terps were on an 8-year losing streak to Clemson heading into that magical year, but ended it with a resounding 37-20 win at Byrd. Shaun Hill threw for 2 TDs, the tandem of Perry/Riley combined for 150 rushing yards and 2 TDs, Nick Novak kicked 3 field goals and the defense picked off that pretender Woody Dantzler (Brendan note: how annoying was Chris Berman when Dantzler made the NFL? Wooooooody. Tiny. Daaaaaantzler) 3 times. The Terps were on their way to the BCS and laid waste to a Clemson team that was little more than a small bump in the road.

Brendan: Let me take you back to 2006. Maryland, in the midst of one of their better seasons under Ralph Friedgen, took an underdog Maryland team into Death Valley and emerged victorious, 13-12. Dan Ennis hit the game-winning field goal with no time remaining on the clock to put together quite the four-game winning streak. It started with Virginia, then saw wins over NC State, Florida State and Clemson. Maryland would cap it off with a win over Miami before losing to the best Boston College and Wake Forest teams of the decade.

Todd: November 17, 1984 Maryland 41,Clemson 23 I chose this game mostly so I can hint about the game the week before that. Old guys can think back to 1984 to remember two monumental games that year with the losing team coming out on the short end both times. The Terps started that season 2-3 after losing 25-24 at Penn State. The offense then went on a roll and scored over 40 points in 5 of the last 7 games. This win over then 20th ranked Clemson in a game played at Memorial Stadium in Baltimore was Maryland's second consecutive win over a ranked team. The Terps won their last 7 that year ending the season with a 28-27 win over Tennessee in the Sun Bowl and were ranked twelfth in the final AP poll.

Andrew: The aforementioned collapse during the disastrous 2011 football season. I remain convinced that had CJ Brown connected on that long pass that hit Kevin Dorsey (I think it was him) right in the hands, they would have won and the season would have been very different.

FlaTerp: It was 1990 and I was a sophomore when the Terps faced Clemson at Memorial Stadium in Baltimore. I'm not going to lie -- we had tailgated for hours and I was bombed -- but I vaguely remember Maryland squandering a great defensive effort and then a botched snap that cost Scott Zolak and the Terps what would have been a terrific win over a ranked Tigers team. Instead, Clemson won 18-17.

Brendan: In 2009, Maryland went on the road to face #13 Clemson led by Trevor Booker and Terrence Oglesby and while they trailed at the half, they cut the deficit to 36-33 early in the second half. Things were looking good. Hell, you may have even thought they had a shot to win. Yeah, that didn't happen. Clemson went on a 57-31 run to end the game in what was just a brutal way for it to end.

Brendan: Howard's Rock is a farce and a dumb tradition. There, I said it. 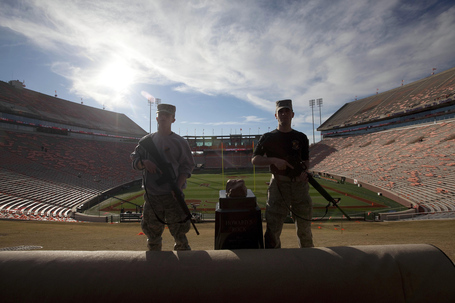 It's a rock. You can take it easy. Photo via Joshua S. Kelly, USA Today.

Andrew: It's a freaking ROCK from California. Remember when everyone went all gaga over that pre-game video from the Georgia game last season where they showed the players getting into the busses on one side of the stadium, driving around to the entrance, getting out and running down that hill? This one? Yeah, that was stupid as hell. Ohhhhhh I have chills watching a bunch of guys ride in a bus and run down a hill after touching a rock. The Most Exciting 25 Seconds in College Football? Give me a break.

What other school has a verb named after their failures?

FlaTerp: You know what else I remember? West Virginia 70, Clemson 33 in the 2012 Orange Bowl. You can always count on Clemson to really show up in the big ones.

Andrew: What other school has a VERB named after their failures? Also, Steve Spurrier owns their ass.

Brendan: Didn't that game bring us the Coach Stitt revelation and now we all know "Stitt Happens?" I kind of love West Virginia and that maniac Holgo for that.

FlaTerp: Then enjoy Holgo while he lasts Brendan, but my advice: don't get too attached! ‘Neer-bashing is for another day though. We're not quite done with Clemson yet.

Todd: Nothing. Okay, I will kinda miss that silly ass moment when CBS re-launched Hawaii 5-0 and the college bands competed to play the theme (MD won BTW) but Clemson ended theirs with a "Book ‘em Dabo." IPTAY for that?

Grant: Their colors are dreadful. Purple and orange shouldn't mixed unless it's purple soda and orange soda because that combination is deadly.