What are your memories of the Eagles?

Remember how you felt every time you were watching a Maryland road game over the past year and the fans started shouting "A-C-C! A-C-C!" in unison at the Terps? It's time for the Testudo Times crew to respond! Let's share some memories and have a little fun with all of Maryland's old rivals on our way out the door. First up -- Boston College.

Brendan: Luke Kuechly/Jared Dudley -- Kuechly was just so much fun to watch as a guy who wasn't a physical freak and was just a great football player. Meanwhile, Dudley was a guy who was even less physically impressive, borderline doughy, and loved jacking three's. Two things I'm really familiar with.

FlaTerp: I'm pre-dating the ACC here, but hey, I'm old, so it is what it is. I'll go with Dana Barros, a dynamo little sharpshooting guard who played a season for Gary Williams.

Pete: Mark Herzlich. Kuechly's a great pick as well, but the non-football reasons have always pulled me towards rooting for the guy. To add on to that, he was simply a ferocious tackler and was buckets of fun to watch. 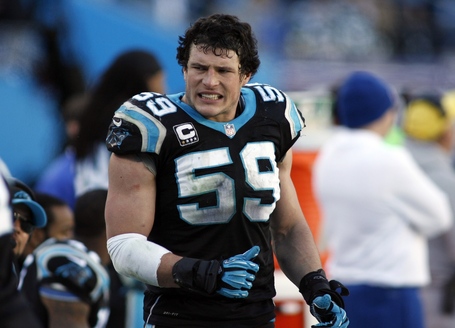 Brendan and Pete are fans of this former BC star, even though he looks a little too much like Andy Samberg to be taken seriously as a linebacker. (Photo courtesy of USA Today)

Todd: So many memories in this nine year history. Maybe Carolyn Swords. Probably because every time she made a big shot I heard Steve Buckhantz call "Dagger!"  so I could reply, "No. Swords." She and Stephanie Murphy made BC moderately dangerous for a couple of years.

FlaTerp: Doug Flutie. Brendan, I'll take your Matty Ice over my little 5-11, CFL-bound gnat of a Heisman quarterback any day. The Miracle in Miami? Pure luck.

Pete: Matt Ryan. I'm trying to pick something different from you guys, but I pitied Chase Rettig, not hated him. Matt Ryan is the worst.

Andrew: Matt Ryan made Chris Turner a Maryland legend and I'll always hate him for that. Also, how do you lose to Chris Turner? 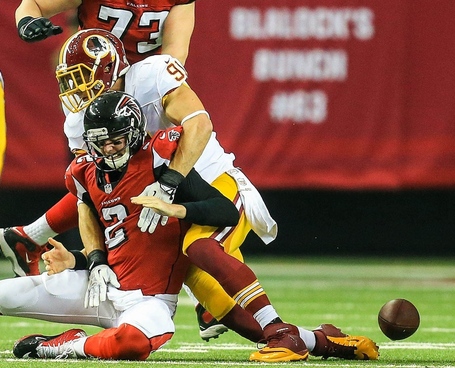 Brendan: None, Boston College was never really memorable to me as a member of the ACC in the major any sport.

FlaTerp: BC made its ACC debut in 2005, and the Eagles' very first conference game was at the Comcast Center. Ekene Ibekwe scored 21 in a 73-71 nailbiter the Terps tried to give away, but Maryland handed BC its first of many, many, many, many losses as a perennial ACC also-ran.

Pete: Beating Matt Ryan in 2007, of course. The Eagles were a top-ten team with a Heisman contender at quarterback, and the Terps picked him off twice en route to the upset win.

Andrew: Hahaha what? I'm sorry, I have limited room in my brain, I don't need to be wasting it on remembering athletic matchups with Boston College. I'll probably forget they even exist pretty soon. [But, yeah the Chris Turner game in 2007.]

Todd: The three game sweep at BC this season that seemed to turn the Terrapins' baseball season around. So thanks, Eagles.

Brendan: Any game at the Conte Forum would be a good place to start. Unfortunately, Maryland hosted Boston College in the final week of the 2009 season. It was cold and miserable and the final score was 19-17 in favor of Boston College. Dave Shinskie had a Dave Shinskie-like performance -- 14-for-27 with 227 yards and a touchdown and it was awful. 2 years before they beat a top-10 BC with Matt Ryan and lost to ... Dave Shinskie. 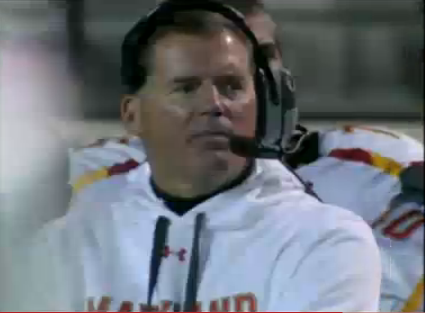 Pete: It's hard to disagree with FlaTerp here, as the Boston College game really stuck out to me as one of Edsall's biggest failings as a head coach.

Andrew: I think I made myself clear above.

Todd: I'm with Andrew. Never got worked up about any BC game. Remember often thinking, "We lost to BC? Really? Oh, well. Next."

Grant: Every time we lost to them in basketball because that was the moment I realized we weren't going to the tournament...again.

Brendan: I won't miss Boston College because I never really cared about them being a part of the ACC. They seemed like an afterthought in the first round of conference expansion. We were supposed to be getting elite Miami and Virginia Tech programs and got Boston College to even the numbers.

FlaTerp: Agreed. The funny thing is that all those schools were supposed to upgrade ACC football, but ACC football dragged them all down instead.

Brendan: Boston College must have been thrilled when Syracuse joined the ACC. Another northern partner doomed for failure in football. Wait, what's that? BC lost to them and gave them their sixth win and bowl eligibilty? Fun.

FlaTerp: And Syracuse will be a viable alternative for BC's New England recruits who want to be in the region but not play for a tiny private school with middling teams, small venues and few fans. It's funny, it seems like BC joining the ACC may have opened the door for guys like Jake Layman and Andrew Isaacs to snub the Eagles. Would those guys be Terps if BC had stayed away?

Pete: Well, they certainly wouldn't be Eagles -- by picking Maryland, we already know they're better than that (shhhh, don't bring up the fact that Isaacs committed to Boston College first).

Grant: I never once said "hey I have to rush home to catch that Boston College game." They were never really that relevant to me, except for when Andre Williams decided to run for 321,345 yards against us last year. 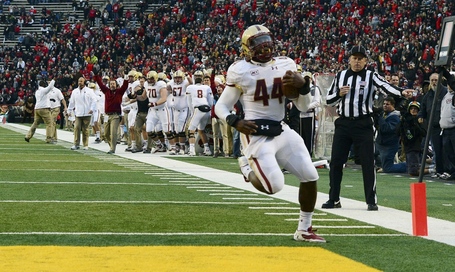 We're not going to lie -- this guy was a heck of a BC running back. Grant just wishes he hadn't made Byrd Stadium his personal treadmill last fall. (Photo courtesy of USA Today Sports Images)

Todd: I hate to say this but in the rev sports Maryland's lost enough to BC that I'm afraid if I took a parting shot I'd miss.

Andrew: I'll say this about BC, they certainly are a school that properly funds athletic programs. I bet some of them are somewhat competitive occasionally as well! As the famous BC fight song goes, "We are a private school in a cold city that's sometimes as good at BU at hockey! Rah rah rah!" Seriously, I couldn't care any less about them or their hill made of chestnuts. Seems dangerous. They're basically UConn, but UConn is at least good at a sport with more than 60 Division I participants.

FlaTerp: So here's the big question with the Eagles going forward in the new-look ACC: Are they doomed to join Wake Forest in the small-school-with-no-revenue-and-little-hope-of-contending-more-than-once-a-decade-at-best corner of the conference, or can they rise up and be a factor in at least one of the two major sports?

Brendan: I don't think so, they have had some semblance of decency over a longer period of time. I don't think they are destined for the upper-echelon of the ACC, but they aren't quite Wake Forest. They are stuck in this flat circle of mediocrity and occasionally flirt with the bottom of the ACC. Good luck, I guess?

Pete: I think they're definitely above Wake Forest as well. There are some geographic issues that will prevent them from ever being a top-tier ACC school for an extended period of time, but the financial differences between them and the Demon Deacons can make them at least a team that expects to go bowling each year.

Andrew: I have family in the Boston-area that follow BC very closely and have season tickets to football and basketball. Their comments after Christian was hired were along the lines of, "BC has no interest in spending the money to be competitive in anything other than hockey. They want to be Harvard, but they aren't Harvard academically or, at this point, athletically." I'll take their word for it. I guess they were decent football-wise last season, but let's see how they fare sans-Andre Williams. Maybe overall they're better than Wake, but it's not by much. Congrats BC! You're maybe, kinda, slightly not the worst athletic school in a mediocre conference!

FlaTerp: And on that note, let's kick it over to the commenters to weigh in.