Maryland got another strong postseason start from freshman Mike Shawaryn and solid work from Bobby Ruse and Kevin Mooney out of the bullpen to hold on for a 4-3 win over the South Carolina Gamecocks in their second game in NCAA baseball tournament.

Maryland won the coin toss becoming the nominal home team in what is listed on the schedule as game four of the NCAA Regional in Columbia, South Carolina. The game was the second for both the Terps and the host school the Univeristy of South Carolina Gamecocks.

Before I start with the a recap of the Terps' dramatic 4-3 win, I want you all to see what back to back National Championships, regular attendance in the top five or ten in the country, and tons of money can buy. In Columbia, South Carolina, it's called Carolina Stadium. And it looks like this: 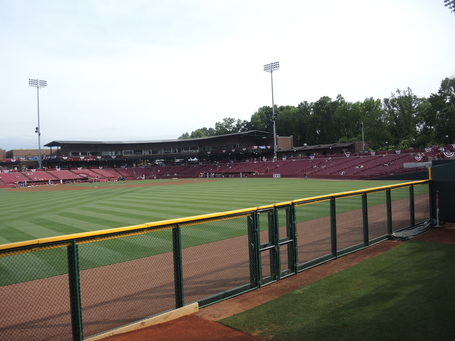 Dialing up a good start

A slight breeze was blowing from right to left as the teams took the field for a 7:05 start. The clouds that had hovered over Columbia most of the day had lifted and the game time temperature was a comfortable 80 degrees. In Towson for the women's lacrosse championship Maryland fans outnumbered Syracuse fans by a factor of probably nine to one. At Carolina Stadium, in front of a crowd of 6,831 the discrepancy between Gamecocks fans and Terrapins fans was probably proportionally greater. And the fans were vocal and involved throughout.

Early on the Terps were unfazed by the large and hostile crowd. Freshman Mike Shawaryn retired the Gamecocks in order in the top of the first. Charlie White got Maryland started in the bottom half of the inning lashing a 1-2 pitch to the gap in left center. After moving to third on LaMonte Wade's ground out to second, White trotted home when Brandon Lowe bounced a single through the hole between short and third give Maryland an early 1-0 lead. The Terps failed to capitalize any further despite getting a two out infield single from Blake Schmit as Tim Lewis bounced out to short to end the inning stranding two.

A two out rally

Shawaryn gave up his first hit of the night - a two out double in the top of the second but got out of the inning with no damage. Just when it looked like the Terps would go meekly in the bottom of the inning, Kevin Martir drovw a line drive to left that froze Gamecocks' left fielder Gene Cone. The ball bounced in front of Cone then squirted under his glove allowing Martir to move to second on the error. Charlie White reached on an infield single to second.

With the count at two balls and two strikes, and the Carolina crowd engaged in the rhythmic clapping that accompanied any pitch with two strikes on a Terrapins' hitter, Wade pulled a line drive into the right field corner scoring Martir and sending White to third. Lowe topped a slow roller to third but Gamecocks' third baseman Joey Pankake unleashed a flat throw that skipped past first baseman Kyle Martin. Both runners scored and Lowe went to second, ending the day for starting pitcher Jack Wynkoop. Jose Cuas struck out to end the inning but the Terps had a 4-0 advantage at the end of two.

A two out rally for the Gamecocks

After a scoreless third, South Carolina got on the board in the top if the fourth. The inning began innocently enough as Shawaryn retired the first two on a pop out to left and a ground out to short. Gamecocks' first baseman Kyle Martin the lined Shawaryn's first pitch to right for a single. Martin moved to second when Martir, throwing behind the runner in an attempt to pick him off, launched the ball several feet over Wade's head into right field. The freshman then lost the strike zone a bit walking Grayson Greiner and falling into a 2-0 hole against DC Arendas. Arendas lined the next pitch into left scoring Martin but Connor Bright forced Greiner to end the inning.

Just what he needed

The Terps gave their starter a long rest nearly scratching out a run in the bottom of the fourth before leaving runners on the corners. After his rough fourth inning, Shawaryn had thrown seventy pitches. However, the Gamecocks gave the freshman just what he needed going three up, three down on three routine fly balls across the outfield to left, center and right. More importantly, Shawaryn threw only five pitches.

Trouble in the sixth top and bottom

Gamecocks' designated hitter Max Schrock led off the inning lining a 1-2 pitch over the head of shortstop Blake Schmit. After falling behind 0-2, Pankake drew a walk and Kyle Martin followed with s shot to right that just missed clearing the fence for what would have been a game tying three run home run. The double drove in USC's second run and put men at second and third with none out. Shawaryn got Greiner to look at a called third strike but Arendas fly ball to left was just deep enough to score Pankake. Bright then became Shawaryn's third strikeout of the game as the Terps were now clinging to a 4-3 lead.

After Convissar popped out to second, Papio drew a one out walk. The Terps then fell victim to the Gamecocks' defense. Martir hit a sharp grounder to third but Pankake made a diving stop. While Papio was able to advance to second, Pankake was able get the slow footed Martir for the second out. White walked and Wade followed with a single to left but Cone, whose earlier error had led to a Maryland run uncorked a perfect throw to the plate beating Papio by several feet.

Maryland head coach John Szefc sent his freshman out to start the seventh and Shawaryn briefly silenced the energized crowd by getting Cone on a ground out to short. He then hit Tanner English who stole second before Marcus Mooney drew a walk. With runners on first and second, Szefc then brought Bobby Ruse on in relief. The junior needed only three pitches to get out of the inning retiring Shrock on a line drive to right and Pankake on a sharp grounder to Lowe.

Ruse faced two batters in the eighth giving up a lead off single to Kyle Martin who was sacrificed to second on a perfect bunt by Greiner. With the tying run on second and one out in the eighth, Szefc opted to bring in closer Kevin Mooney. Mooney got ahead of Arendas 0-2 then hit the second baseman on the foot. Bright hit what appeared to be a tailor made double play ball to Schmit but Lowe, attempting to hop over an aggressive slide by Arendas, threw high to first extending the inning. Mooney fell behind Cone 3-0 before coming back to strike him out on a pitch in the dirt that got away from Martir but the catcher was able to make the throw to Wade for final out.

Though Nick Cieri, pinch hitting for Convissar, drew a one out, four pitch walk in the bottom of the eighth, the Terps went meekly without threatening to score and Mooney came on to attempt to close out the game for Maryland. English pulled a lead off single through the gap between Lowe and Wade. Marcus Mooney tried to lay down a sacrifice bunt but pushed both foul to fall behind no balls and two strikes. After working the count even, Maryland's Mooney got him looking. With English running, Max Schrock then blooped a single to shallow left putting runners on the corners with one out. The count stood at 2-2 when Pankake hit a sharp grounder to second. The Terps turned the 4-6-3 double play with Schmits' throw barely beating Pankake in a bang bang play and the Terps held on for the 4-3 win to move witwhin one game of advancing to the super regional.