Notable reactions to the news that Seth Allen would be transferring from Maryland.

Today's events provoked some differing reactions around the college basketball world. We've tried to compile a list of that reaction. If there are any other important ones we missed, feel free to tweet them to us @testudotimes and we'll update.

Maybe I am crazy, but I still feel that Maryland can make NCAAs next season: Dez Wells, Layman, Smotrycz, Mitchell, Trimble, Wiley, Reed.

@GoodmanESPN You are crazy, but you are definitely also correct

I don't see Turgeon bring distraught about these 4 leaving except Seth Allen, who was always very tight with Faust. That is clearly a loss.

If you'd have asked me six weeks ago who was most likely to leave, Seth Allen may have been last on the list. Some turmoil with him since.

None of Peters, Faust, Cleare and possibly Mitchell was a surprise. Even Wells toyed with NBA. Allen was primed to star and seemingly fine.

With Seth Allen gone, melo Trimble now the clear-cut starter at the point, with Wells at SG, Layman at SF, Smotrycz at PF, C TBD.

The expectations for Melo Trimble were steep - now the pressure is even greater. Can't think of a HS kid more capable than him to handle it.

That said, it's important to temper expectations. He won't be perfect at PG and will face a learning curve. Will boost culture immediately.

Good thing they’ve got Trimble coming in to run the show. But who gives him a rest?

It's time for me to say it... What is going on with the #Terps program!?!? When was the last time ANY school had 4 kids leave the program!?

I understand Faust, Peters, and Shaq's decision to leave the program. But Seth makes no sense to me. Can only come up w/ 2 explanations.....

1. Seth didn't want to play the 2 if Trimble is going to start from Day 1. 2. Really bad chemistry btw Turgeon and players. Hope it's first

What a complete mess. #MarylandBasketball

I just retweet anything that has to do with me

And that he did. Just a small sampling... 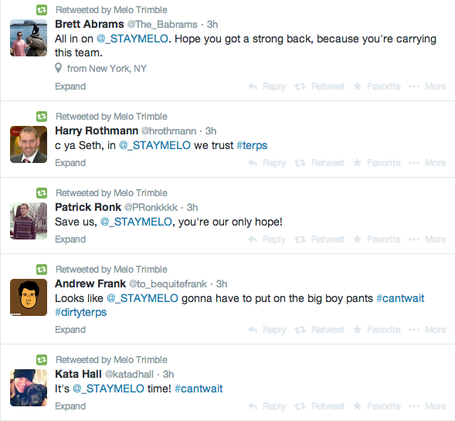 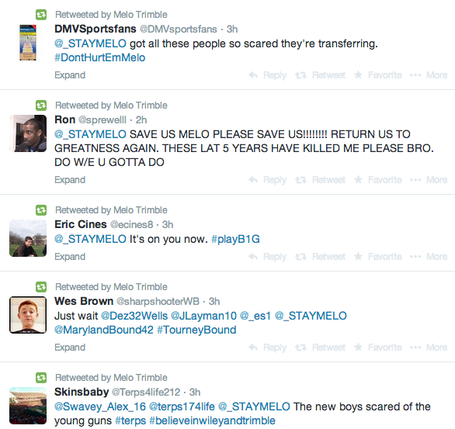 We couldn't be more excited about the direction our program is going. We have a great group of guys who want to work and do...

...something special here at Maryland. We are all behind Coach Turgeon. We are working hard to make sure Maryland is at the top of the...

...Big Ten next year. Thanks to all the fans for sticking with us - we are most definitely on the right track!

Excited for whats to come next. Surrounded by a bunch of guys and a great staff that want to work hard to reach 1 common goal.

-This program cares so much about all of the players and i know were going to have a great season coming up.

@B1gDMV last of a dying breed

You not happy? Okay, well go get happy & tell me how that goes.

I'm only human. So please stop judging Me. Thank you so much.

"Adversity only visits the strong but takes up residency with the weak."

I'll miss the guys leaving, but I love the commitment of our returning players and the class we have coming in #TerpNation