Melo Trimble and Jared Nickens showed why Maryland fans should be excited for next season.

Testudo Times was in attendance for the 41st annual Capital Classic at TC Williams High School in Alexandria, VA on Saturday. The Capital Classic is America's longest running high school basketball all-star game and sports an impressive group of alumni, including Moses Malone, Michael Jordan, Patrick Ewing, Juan Dixon, Carmelo Anthony, LeBron James and hundreds of others. It pits the "Capital All-Stars" made up mostly of local DMV talent against the "US All-Stars", comprised of elite players from around the country.

Maryland was supposed to have four participants in this year's game - Melo Trimble, Dion Wiley, Trayvon Reed and Jared Nickens - but only ended up with two. Trayvon Reed was in attendance in a walking boot, the product of a foot injury sustained while volunteering at a baseball game. I talked to him after the game (more on that later) and he assured me all is fine and he'll be out of the boot in three weeks. Dion Wiley was a no-show, and not even mentioned when announcing the the rosters. According to Trimble (again, more from him later), Wiley had to travel to New Jersey to see his mother last minute. I was disappointed because Wiley was the only American Terp commit I hadn't seen play and, by all accounts, Reed has improved his all-around game immensely since I last saw him in January.

Here are the complete rosters:

The game kicked off with a Jimi-Hendrix-at-Woodstock-esque National Anthem preformed by 14-year-old Izzy Lemons on an electric guitar. This kid might be the best guitarist I've seen in my entire life. Dude brought the house down.

Starting line-ups were the Martin twins, Rodriquez, Newton and Delgado for the US team and Morgan, Trimble, Palmer, Porter and Booth for the Capital team. Future Maryland players got the biggest applause when their names were announced -- Terp Nation was well represented in Alexandria.

The US All Stars came back from a double digit deficit to beat the Capital All Stars 139-134 but it seems unnecessary to give a blow-by-blow account of an all-star game, so I'll provide overall takeaways from the event.

First of all, like any other all-star game, most players were in it to show off their individual skill set. There were moments of really good basketball, but mostly players simply chucked it from deep and (made attempts at) highlight reel dunks.

On the trail with Melo Trimble

Testudo Times was on the scene to watch Maryland's star commitment play.

Get to know Jared Nickens

Part of the best Maryland recruiting class in a decade, Nickens wants to be known as more than just a shooter.

On the trail with Melo Trimble Get to know Jared Nickens

Onuaku is an exceptional passer, and not only for a big man. He seemed to take pleasure in uncorking a pinpoint outlet pass or dishing to a cutting teammate from the top of the key. He's also a fantastic rebounder, pulling down 14 in the game. What I wasn't prepared for was his offensive game. He hit a three early on and showed off some nifty post moves - scoring a team-high 21 points.

Delgado is a star in the making for Seton Hall. He scored a game-high 23 to go along with a game-high 15 rebounds. His midrange game is gorgeous and refreshing to see in a time when very few players can hit consistently from 10 to 20 feet. He set great screens and dominated the glass. Delgado also hit the game-winner with less than a minute to go in a back and forth game that saw at least four lead changes in the last three minutes.

The two biggest surprises were the local kids Gregory (from the District) and Robinson (from Silver Spring). Neither are currently committed, but wherever they end up they'll be steals for their program. Gregory showed off some major hops. He was easily the bounciest player at the game. He finished a few alley oops, threw one off the backboard to a teammate and hit a three. He has offers from Canisius, DePaul, FGCU, Rutgers, St. Bonaventure and UNLV.

Robinson put up one of the most ridiculous stat line's I've ever seen. He had 17 points, 3 assists and 2 rebounds, including 5-7 from deep and 6-10 overall...in ELEVEN minutes. He played the least of any player in the game and scored the second most points on his team. As of December he had offers from Delaware, Drexel, Towson, Siena, Marshall, Robert Morris, Binghamton, LIU Brooklyn and UMBC, according the Washington Post.

Now, the part you all care about:

As odd as this is to say about someone competing in an all star game where the losing team scored 134 points, I was blown away by Nickens' defense. He has incredibly active hands, great footwork and seemed to intuitively know the angle to take on his man. Even more impressively, he was continuously giving effort on the defensive end every minute he played. He only registered a single steal and a single block but whatever player he was covering was always bothered, annoyed and frustrated. There's no way for me to prove this, so you'll have to trust me.

On the offensive end Nickens showed a great ability to move off the ball. His first points were on an off-ball cut into the paint where he received a pass, turned around and hit a 10-footer. As always, his jump shot is picture perfect. Every shot looks like it's going in, and on this day about half of them did, finishing with 13 points on 5-11 shooting and 3-7 from deep in 23 minutes. He only had one dunk, but he's got a wiry athleticism. His ball handling is above average for a wing, and he even had moments running the point for his team.

Unfortunately, I wasn't able to talk to Nickens after the game.

Maryland's standout commit from Bishop O'Connell gets nod for best talent in the area.

"Next Year:" The future of Maryland basketball

Melo Trimble named all-met player of the year "Next Year:" The future of Maryland basketball

Trimble started at point for the Capital All Stars and spent the first three quarters deferring to his teammates. He'd finish tied for a team-high with 5 assists. What stood out most about Trimble was his cerebral play. While his defense isn't elite, he's an incredibly smart player and is able to jump passing lanes and pick pockets, resulting in a game-high 4 steals (twice as many as the next highest). He also had only one turnover, although it was a costly one in the final minute as he tried to drive to the basket to tie the game.

His jump shot wasn't falling for most of the game, going just 2-6 from beyond the arc, but he never seemed phased. At times Trimble will force his offense, which didn't end well when he was forcing jumpers, but yielded great results in the fourth quarter when he started to put the ball on the floor. He scored six straight points on drives to the basket at one point in the fourth. Trimble would finish with 14 points on 6-11 shooting. He went 5-6 from the field in the second half.

Also of note, Trimble was by far the best point guard in the game. He ran the offense well and when he was off the court (he officially played 18 minutes, but that seems low) the Capital All Stars seemed completely out of sorts. More than anything he has the poise and polish at the point that Maryland's lacked in recent years. He demands the respect of his teammates.

After the game, Trimble said that even though he and Nickens weren't on the floor at the same time much, he anticipates going against each other next season in practice. He's also a big fan of Nickens' game.

"Jared can shoot. A lot of people haven't seen him play, but from what I see, he can shoot and he can get to the basket. He can dunk on you and that's good for a wing."

While Trimble said he enjoys the experiences, he doesn't love playing in all-star games like the Capital Classic and the recent McDonald's All American game.

I'm not really an All-Star-type player. I don't like going out and taking 100 shots. People might say I shoot a lot for my team, but when it's my own team, I've got to do whatever I've got to do to win. -Melo Trimble

"I'm not really an All-Star-type player. I don't like going out and taking 100 shots. People might say I shoot a lot for my team, but when it's my own team, I've got to do whatever I've got to do to win."

The best part of the McDonald's game, he said, were the practices.

"The practices...in front of NBA scouts...It really showed me what an NBA combine was going to be when I get to the next level."

On the Kentucky Derby Basketball Classic game, where he, Wiley and Nickens played together for the first time:

"It was good. I feel like when me, Dion, and Jared are on the court at the same time, we were winning...Us having the bond that we have now, we know who's going to take the shot and if it's a good shot or not."

Trimble said he was excited to play with two 7-footers in Reed and Michal Cekovsky next season, the two incoming freshman with which he's yet to play. Of everyone in the freshman class, he's played alongside Wiley the most, in the DMV Elite Classic, the Derby Classic and numerous times before.

"Me and Dion have known each other since we were 11 years old.  The bond is going to be real because we know who can do what and we both can shoot and that makes it even easier for a point guard to get more assists and expand my game."

Trimble also said he feels like Nickens and him are already brothers and feed of each other's competitiveness. He made sure to mention that he beat Nickens when they played NBA 2K14 against each other at the Derby Classic.

Although Reed wasn't able to play in the game, I caught up with him for a quick interview. Believe me when I say he's at least 7-2. He's the tallest human being I've ever seen and has definitely put on some muscle since I scouted him in January.

Reed said he sprained a tendon in his foot running the bases while playing baseball, but assured me it wasn't serious and he'd be out of the boot in three weeks.

On his future teammates Nickens and Trimble, Reed said, "I think they played well. I know they could do way better. I'm just ready for next year...Possibly winning the national championship."

"I'm going hard, I'm hungry. People told me a lot, they're all talking...Telling me what I can't do, I'm trying to show the world what I can do"

From your mouth to Juan's ears, Trayvon.

These are the official stats from the game. Note that Cody Martin was mistakenly listed twice. Number 11 was actually Jared Nickens, which I've written in myself. 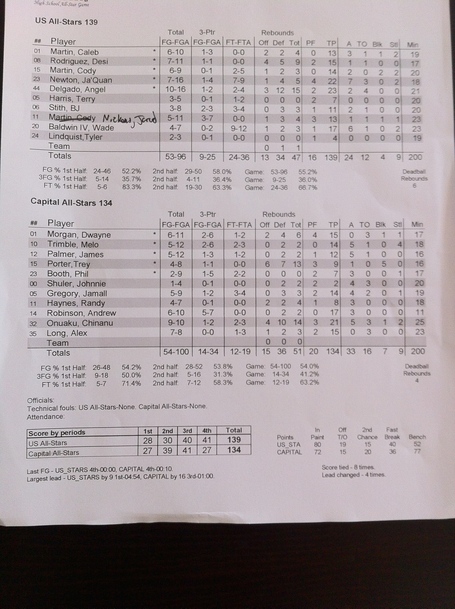