Our series rolls along with the lone freshman to return next season.

After committing to Maryland as an unknown from the Eastern Shore and spending a year at Massanutten Military Academy, no one was quite sure what to expect from Damonte Dodd in his freshman season. We knew he was big (the tallest player on the roster) and athletic, but beyond that...not much more. What we got was, weirdly, just that. He was big and he was athletic but beyond that...he didn't do much more.

In short: not many.

On the bright side, his per 40 minutes numbers were pretty respectable: if you ignore the "6.5 fouls" thing, he averaged about 4 points, 8 rebounds and 2 blocks per 40.

Overall, he played the least, scored the least and contributed the least of any of the regular rotation players on the Terrapins.

Dodd scored 6 points in the first half against North Carolina State, helping Maryland establish an 11 point lead after 20 minutes. That's 37.5% of the points he scored all season!

Can't remember what happened after that. Nope. Can't recall.

With just over a minute left in Maryland's game against Duke at Cameron Indoor Stadium the Terps lead 67-66. That was, until Jabari Parker drove towards the basket and threw down over Damonte Dodd. Duke would never relinquish the lead.

The worst part is that Dodd was this close to stuffing the ball right back in Parker's stupid face. 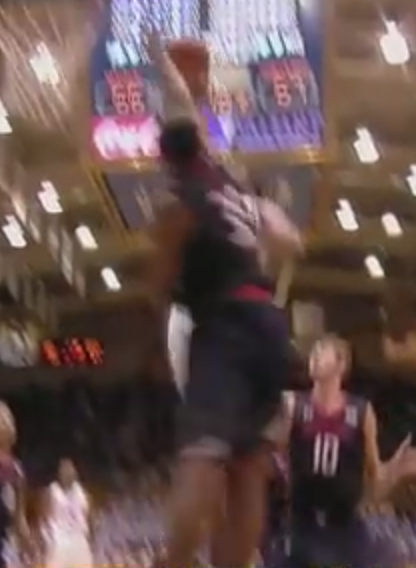 Instead, he was on the wrong side of a SportsCenter Top 10 moment.

Again, Dodd played the least minutes of any non-walk-on this past season, just 51 more minutes than Varun Ram (who himself played 7 total minutes during conference play). He did that on a Maryland team with a very thin and unproductive front court. Next season the Terps lose Shaq Cleare, but add two highly regarded 7-footer freshmen.

We knew Dodd was a very raw prospect when he came to College Park and there remains the possibility that he could develop those raw tools into a solid rotation player. Should he do that, he could overtake the incoming freshmen for playing time which could be very beneficial for two prospects seen as raw in their own right. Even a slightly productive Dodd would some pressure of Trayvon Reed and Michal Cekovsky, as well the established big men Charles Mitchell and Evan Smotrycz.

Dodd's best case scenario, while being realistic, for 2014-15 is a player that can stay on the court without fouling, play stout post defense, rebound and get some buckets on lobs and put backs. As for worst case...well...a repeat of his freshman season would be pretty worst case.