Maryland football recruiting: What could the Terps' 2015 class look like?

We take a look at the best-case scenario and most likely scenario for Maryland's first class after the Big Ten move.

In parts one and two of this series, we took a look at the recruits Maryland is targeting on the offensive and defensive sides of the ball. Today, we'll delve even further into the hypothetical -- what could Maryland's complete 2015 class look like?

Now, obviously, we're going to try and stay within the realms of reality -- Maryland is not getting Trent Thompson or Josh Sweat or any of those kind of guys, so we're not including them. What we are going to do is use 247sports's handy Class Calculator tool to look at two different potential Maryland classes: the best case scenario and the most likely scenario.

Right now, the Terps have just one commitment -- four star Linganore offensive lineman E.J. Donahue. Maryland is expected to take about 20 more commitments, bringing the class to a number around 21 (assuming Donahue sticks with the Terps and doesn't flip to a recent offeree like Florida State or Wisconsin.

Let's start with the best-case scenario -- it's not a likely haul by any stretch of the imagination, but it is one that could happen if all the stars happened to align for Maryland (which, ha). 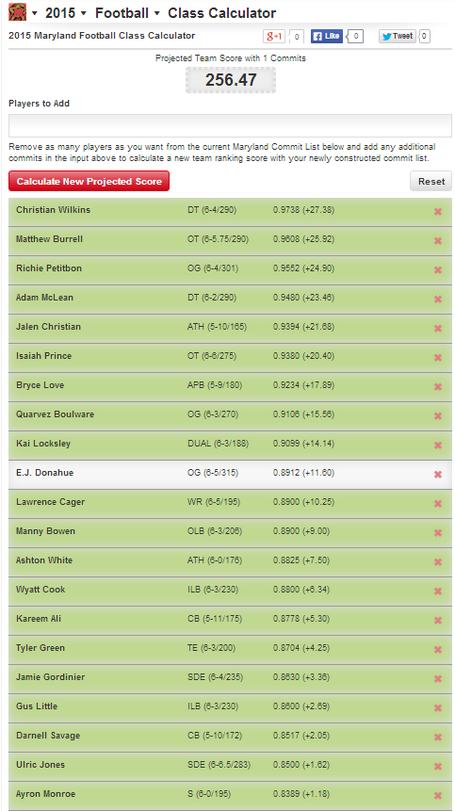 Where would it rank?

In 2014, this class would have ranked 12th in the nation, right behind USC and ahead of recruiting powerhouses like Miami, Stanford, Oklahoma, Texas, and UCLA, among others. It also would have ranked second in the Big Ten, behind just Ohio State.

If trends hold, a conservative estimate would put such a class in the top 15 of the nation. It's worth repeating at this point that this class would be a massive achievement and completely unexpected -- but these are all players that Maryland at least has a slight chance with.

Does it fill all the needs?

Absolutely. You've got at least one player at each position (besides full back and specialists), with five offensive linemen and three cornerbacks -- the two biggest positions of need. There's also two wide receivers to fill the voids of Stefon Diggs and Deon Long, as well as four defensive linemen and two inside linebackers.

The most likely scenario is a bit more difficult: it's still early in the process, and nearly everything could change. Let's do it anyway! 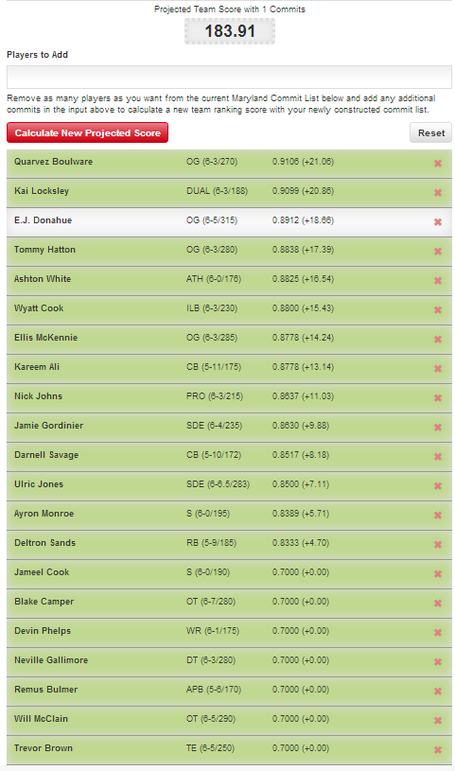 If that looks much worse, it's because A) it is much worse and B) some of the players (Jameel Cook and below) have not yet been rated.

Where would it rank?

Does it fill all the needs?

Sure! The only position missing is outside linebacker, but Maryland has stocked up on the position in the past few classes and could go a year without bringing one in, if need be. But there are five offensive linemen and five secondary players. The biggest issue? Only one wide receiver in the haul, as we're not hedging any bets on Jalen Christian just yet.

What did we learn?

The sky is (nearly) the limit for Maryland recruiting, as the move to the Big Ten (as well as increased success on the field last season) have seemingly improved the Terps' recruiting efforts. The upcoming campaign, tough as it may be with the harder schedule, is incredibly important to this effort -- many of the high-profile recruits are waiting to see if Maryland can be successful in the Big Ten before really showing serious interest.

It's worth noting again that a full eight players have not yet been rated in the latter class, and therefore don't count towards the score -- so don't freak out just quite yet about the Terps' class being worse than those of the last two years.

Let's see your guys's classes in the comments -- ideal, most probable or both!