With just one regular season game remaining, Maryland has secured a bye from day one of the ACC Tournament. Who might they face on day two? We break it down.

With their win over Virginia Tech on Tuesday, Maryland secured a bye through round one of the ACC Tournament next week. So who will they face in round two on Thursday?

Want to see that visually? 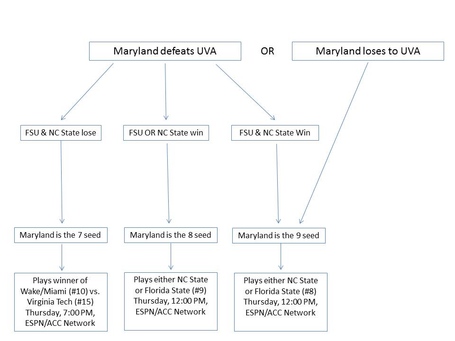 As you can see, Maryland will play at either 7:00 PM Thursday or at noon. In all likelihood, they'll play Florida State or N.C. State, but could end up facing Wake, Miami or Virginia Tech if everything went their way. Avoiding the 8/9 game would obviously be ideal, but if they're not the seven seed, which would require N.C. State to lose to Boston College at home, it doesn't matter much if they're the eight or nine. Additionally, avoiding the 8/9 game means avoiding playing Virginia, who plays the winner of that game on Friday.

If Maryland were to capture the seven seed and win, they'd face Syracuse on Friday. If the Orange beat Florida State, they secure the number two seed. If they lose and North Carolina loses to Duke, they also capture the second seed.