What questions will be answered this March?

Maryland's spring practice has started already (our recap of the first day, if you didn't see), which means football season is right around the corner.

There will be two events open to the public for this year's spring practice: a practice on March 28 at North Point High School in Waldorf, MD that will start at 6:30, and the spring game, which will take place April 11 at 7 p.m. at Byrd Stadium.

You can check out the spring depth chart here.

Will the offensive line improve? Maryland has a number of offensive line recruits in the 2014 class, including three (Derwin Gray, Larry Mazyck and Damian Prince) who are expected to compete for starting roles. Problem is, none of those three will be participating in spring practice (in fact, no true freshmen will), so Maryland is left with the current unit for now.

The unit has really struggled over the past few seasons, but new offensive line coach Greg Studrawa could add a boost after significant experience at the highest level with LSU. Sal Conaboy is pretty much the only assured starter, at the center position, but Ryan Doyle, Andrew Zeller and Michael Dunn are currently cemented at the left tackle, right guard and right tackle spots, respectively.

The one position still up in the air is left guard, where Evan Mulrooney and JuCo transfer Silvano Altamirano are competing. The two split first-team reps on the first day of practice, but the hope is that one of the incoming players will take over at that spot instead.

Roster cuts? Maryland is slightly over the scholarship limit (the Post's Alex Prewitt estimates they're at 87), and they'll probably have to cut two players. Who could it be? Three have already left this spring, but there are a few older players down on the depth chart who may find themselves transferring to smaller schools.

Who wins the backup quarterback job? C.J. Brown is pretty firmly entrenched as the starter, but a healthy Perry Hills could give Caleb Rowe (last year's backup) a run for his money. Another option? Shane Cockerille, who impressed on the first day of practice but is still what Randy Edsall calls a "wild horse" out on the playing field.

Who separates themselves from the running back pack? Perhaps the biggest question this spring, Maryland has a healthy (and lean) Wes Brown back in the mix in what is looking like a loaded backfield. Brandon Ross, last year's leading rusher, is listed as a co-starter with Albert Reid, but he's probably the favorite to get the bulk of the Terps' carries early on. Brown led the team in carries as a true freshman in 2012, but we'll have to wait and see whether that lost weight is a good or bad thing for his running style.

Could the Terps have a new major player at corner?

Is there an answer at cornerback? With Dexter McDougle and Isaac Goins both gone to graduation, cornerback is one of the real issues of concern for Maryland in 2014. The Terps missed on local blue-chip prospect Jalen Tabor, but did somewhat address their needs by grabbing solid Virginia cornerback Daniel Ezeagwu, who will be joining the fold in the fall. In the meantime, the Terps would be in good position if Alvin Hill continues to star in spring, giving them a third reliable option at the position and allowing Will Likely to play more of his natural nickel back position.

What of the other position battles? Besides left guard, two other starting positions are currently up for grabs -- nose tackle and tight end. Returning starter Darius Kilgo now has to compete with Keith Bowers up the middle, as Bowers has kicked in from defensive end (allowing Andre Monroe to start on the outside). At tight end, P.J. Gallo is the favorite to start, but former blue-chip prospect Andrew Isaacs is currently also in competition. Jacquille Veii and Joe Riddle are both battling with Brown for the third running back spot, while Daniel Adams, Marcus Leak, Malcolm Culmer and Taivon Jacobs are all competing for two spots on the two-deep as back-up receivers.

Does the Big Ten move change anything? Not really, no. The only real thing it has changed (besides the opponents on the schedule) is the level of excitement around the program. But Maryland will play their game, and are hoping to counter some of the size-based teams in their new conference with their considerable speed.

Three new coaches on the staff 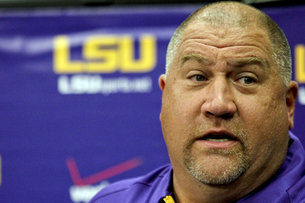 After retaining every member of their staff the year before, Maryland made a few changes in their positional coaches ahead of the 2014 season. Former Ball State defensive line coach Chad Wilt was hired for the same position, NFL great Keenan McCardell was hired as the Terps' wide receivers coach and former LSU offensive coordinator Greg Studrawa was hired as Maryland's offensive line coach.

McCardell has impressed early in spring -- he's loud and active, and can actually participate in the drills -- and Studrawa has the loud, booming voice you expect from big-time offensive line coaches. Wilt is a bit of an unknown, but he's considered an up-and-comer on the coaching scene and may leave for a coordinator position sooner rather than later.

Evan Mulrooney has moved from the logjam at center over to left guard, where he has a better chance of seeing playing time.

Dustin Dailey has moved from quarterback to wide receiver, but still shares a number with Deon Long (so it's safe to say they're not expecting much playing time from him).

JuJuan Dulaney has kicked inside from tackle to right guard.

Andre Monroe has officially moved outside to defensive end, while Keith Bowers is inside for nose tackle.

Undray Clark has moved from safety to cornerback, helping with depth at the position.