A monster half from Alyssa Thomas, strong defense, huge contributions from the bench, and my surprising vote for player of the game lead Maryland into the Sweet Sixteen for the third straight year.

Maybe it was the emotion of the night. Win or lose, this was going to be Alyssa Thomas' last game in a Maryland uniform at the Comcast Center. Maybe it was the size and strength of a Texas Longhorns squad that Thomas' fellow senior Alicia DeVaughn called "huge compared to us." Whatever the reason, the Alyssa Thomas that Maryland fans saw in the first half was far from the Alyssa Thomas Terrapins fans had watched for the last four years. Fortunately for Terps fans, the familiar Alyssa Thomas emerged in the second half when she scored all sixteen of her points and pulled down seven of her eleven rebounds as Maryland hung on for a 69-64 win over Texas in the second round of the NCAA women's basketball tournament Tuesday night.

Games like this are a demonstration of why they need to be decided on the court and not in the minds of analysts. Or at least in the mind of this analyst.

Where I went wrong

In my preview, I featured three Longhorns players - 6'7" center Imani McGee-Stafford, 6'1" All Big 12 forward Nneka Enemkpali, and guard Chassidy Fussell - who collectively scored nearly half of Texas' 69 points per game through the season. Tuesday, the Terps held them five below their average while the Texas bench produced three more than their average.

I thought Maryland would exploit turnovers and have an advantage in guard play. Texas finished with 14 turnovers - four under their season average while Maryland turned it over 16 times - two above theirs. Classifying Laurin Mincy and Shatori Walker-Kimbrough as guards, the Longhorns outscored the Terrapins 47-30 from that position.

When I wrote about depth and rebounding, I'd say I was half right. The first half. Texas used eleven players in the first half while the Terps used ten. In the second half, Texas coach Karen Aston again spread her minutes out between ten players while Maryland coach Brenda Frese shortened her rotation to eight. At halftime both teams had 21 rebounds much as I anticipated. Maryland won the second half by nine - including this one: 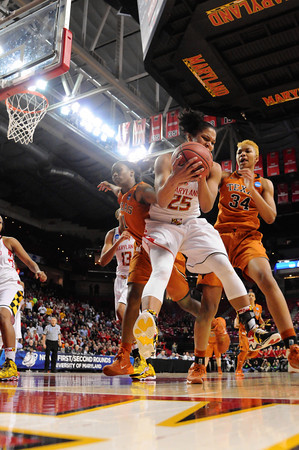 Still it was a margin I would have never predicted.

As Frese noted in her post-game remarks, "We had to find different ways in game to be able to put this game together. We had different players step up with big plays over and over." And here, the Terps' inside players deserve special mention. Brionna Jones, Malina Howard, and Alicia DeVaughn. Their presence defensively and on the boards were essential to Maryland's win Tuesday.

A surprising player of the game

My vote for player of the game goes to Alicia DeVaughn who contributed 12 points and 7 rebounds. She made life in the paint tough for Texas all night and importantly sank all six of her second half free throws. Howard was, with Mincy, the sixth man of the game. Howard gave the Terps 30 productive minutes - the most she's played since the UConn game in November - with 9 points 3 rebounds and a blocked shot. Not only was she essential in neutralizing Texas' inside game, Howard closed out on the shooter to bother the Longhorns' last two three point attempts. Mincy, as you'll see below, played a key role in keeping Maryland in the game early.

I wrote that Maryland's keys to the game would be causing turnovers, rebounding evenly and scoring seventy or more. They failed at the first, far exceeded the second and nearly reached the third. Still, if you had told me prior to the game that the Terps would have two more turnovers than the Longhorns or that Texas' guards would outscore Maryland, I would have said the loss would have been pinned on the home team. On the other hand, the rebounding margin and total points would have made me rethink the game's outcome.

Some of you who doubt Maryland's defense didn't watch last night. Until Texas bombed in three straight three pointers - one coming from nearly NBA range and another a last second prayer that banked in - the Terps had held the Longhorns to 5 of 16 from behind the arc and 34 percent shooting overall. Sais DeVaughn, "We knew coming in that it was going to be a physical game. We played together and communicated throughout the whole game. Just working with each other. It was great."

The game, which featured seven ties and fifteen lead changes, had some strange ebb and flow moments. The Terps seemed bothered by the Longhorns' size and defensive scheme at the outset as they only managed to make three of their first nine shots leading into the first media timeout. The early spark came from Mincy who hit two important three point shots in the early going to keep the Terps in it. The strange part came because they still led 8-7 at that point. As the half played on, Maryland settled in making a respectable eleven of their last twenty-five. Where the Terps were failing was getting to the free throw line and capitalizing on their few chances making only one of four. Meanwhile, Texas made ten of twelve.

The first half box score added to the strange quality. Maryland outshot Texas 41 to 33 percent. The Terrapins held a 14-10 edge in points in the paint and had an 8-3 advantage in points off turnovers. It was also advantage Maryland in second chance points (7-3) and bench scoring (23-9). The Longhorns only made one more three point basket than the Terps so it was that 10-1 margin in free throws that kept Texas in the game.

In the second half, it looked as though Maryland had wrested firm control of the game. A layup by Malina Howard gave the Terps their first double digit lead at 55-44 with 9:24 to play. After some back and forth when the Longhorns cut the lead to six, Lexie Brown's jumper put the Terrapins back up by ten with 4:17 to play. 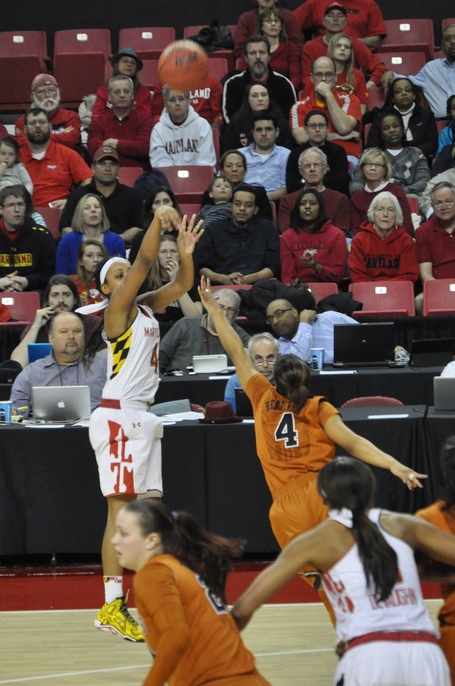 Then things got a little strange again. Texas, a 36.5 percent shooting team from three point range, began dropping in long distance field goals like layups. Three possessions. Three three pointers. In two minutes, Maryland's ten point lead had shrunk to three. A Terrapins turnover and Longhorns layup made the score 65-64 and after Brown missed a jumper, Texas had the ball and a chance to take the lead with under a minute to play. They finally missed the long range shot, Mincy grabbed the rebound and made both her free throws after the Longhorns foul. On Texas' next possession, the sequence repeated with Thomas taking the place of Mincy for Maryland. Her two free throws secured the final 69-64 margin.

The Terps now move on to Louisville to face Tennessee where they will make their attempt to, as Frese put it, "make a run for the roses." And how does she fell about the prospect? Something like this: 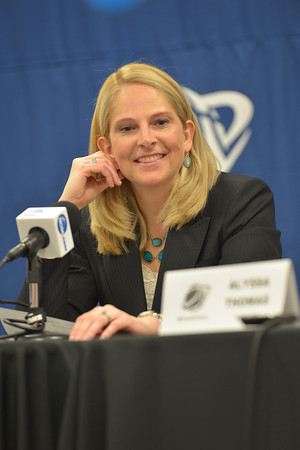 It starts up again on Sunday.

Once again, special thanks to Phil Fabrizi for sharing his photos with me. Also thanks to Cynthia Greenlee for her shot of a Lexi Brown jumper with me in the background.