The first game of the NCAA Tournament turned out to be more or less a ho-hum day at the office for the fourth seeded Maryland Terrapins as they used a 29-2 blitz over the last nine minutes of the first half to run the overmatched Army Black Knights out of the Comcast Center in a 90-52 win. During the run, Army's only points came from the free throw line and Maryland held Army scoreless over the last four minutes and fifty six seconds. As Army coach Dave Magarity said after the game, "All the things we worked on in trying to form a game plan and the percentages we were going to try to play, they just blew them out of the water."

As I wrote in the game thread, it was unsurprising to see the the Terps start out showing a bit of rust and some nerves particularly on the offensive end of the floor. Fortunately, Maryland was active and focused defensively. In the first eight minutes of the game, the Terps had taken eighteen shots and forced six Army turnovers. However, they often settled for jump shots and missed 12 of their first 18 shots failing to take full advantage of Army's miscues and allowing the Black Knights to stay close.

When two time Patriot League Player of the Year Kelsey Minato sank a three point jumper with 9:11 to play in the half Army took an 18-15 lead and Terrapins' coach Brenda Frese called a timeout. According to the coach, it was Alyssa Thomas who took charge in the huddle, "It actually started with Alyssa. She gave a great calming presence in the timeout that we were fine and gave great confidence, I thought, to the entire team." Then came the strategic part of the huddle. "We changed our defense. I thought some of the switches we made defensively really helped us and then we were able to get going with our transition."

The key change was that the Terps began to switching every ball screen and every single handoff. This often left freshman center Brionna Jones guarding Minato and the freshman acquitted herself well. Her footwork and surprising lateral quickness severely limited the star guard's options. Frese and the staff had stressed being comfortable doing what was uncomfortable. Of meeting the challenge of guarding Minato, Jones said, "It was definitely more difficult than guarding a post player. She's really quick but I just tried to keep her in front and take away her shot opportunities."

And what did Minato think? "It's like we woke up a beast. Individually, I tried to attack but I wasn't getting that many clean looks. It was tough because they're so big and so athletic." Though Minato finished with a game high twenty-seven points, the Terps held her to nine in the first half so the bulk of her scoring came long after the game had been decided.

The Terrapins' blitz started with a driving layup by Lexie Brown, who led Maryland with 21 points on nine of eleven shooting. Laurin Mincy followed that with a three pointer from the left wing that gave Maryland a lead from which they'd never look back. A short jumper by Tierney Pfirman and two free throws by Thomas capped a 9-0 Terrapins run before Minato made one of two from the line.

Still, with the Terps leading only 28-20 at the final media timeout of the half, neither the Black Knights nor the 5,337 in attendance could have suspected what was about to transpire. Maryland would run off sixteen points in the final 3:45 fueled in large part by eight from Brown- including two three point jumpers - to take a 44-20 lead into halftime. Perhaps the highlight of the run came when Alyssa Thomas made two free throws coming out of the timeout. Earlier, a jumper with 4:50 to play gave her 2,269 points for her career and tied her with Juan Dixon as Maryland's all-time leading scorer. The first free throw gave the senior her twelfth point and the inevitable passing of the torch was complete. (Thanks to Phil Fabrizio for this photo of the record breaking moment.) 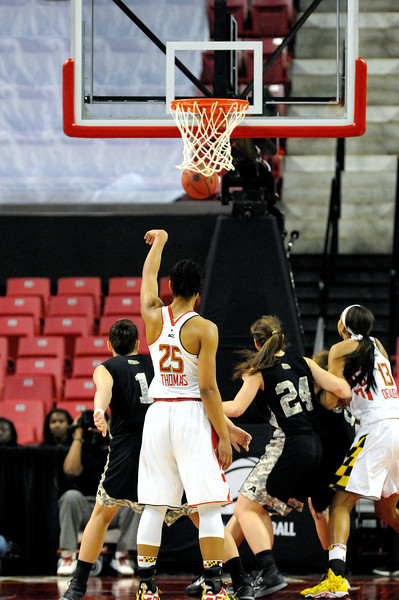 The second half was a mere formality but it is worth mentioning that the Terps got 38 points from their bench including 10 from Tierney Pfirman. Pfirman also pulled down 8 of the 22 rebounds the bench contributed. Those 22 bench rebounds matched Army's team total. Katie Rutan joined Thomas, Brown, and Pfirman in double figures. The senior did all of her damage in the second half including going three for three from beyond the arc. In one other side note, Essence Townsend, who entered the game with four minutes to play, and was serenaded by a small group of fans who sang Happy Birthday to her, scored the Terps' final basket - a free throw line jumper - with nine seconds to play.

Now let's get back to Alyssa Thomas. By halftime, the senior had pulled down 11 rebounds securing the sixty-third double double of her career and twenty-fifth of the season. (For some perspective here, Maryland's next opponent, Texas, has 16 double doubles as a team this season.) Thomas finished the game with 13 points, 14 rebounds, 4 assists, a blocked shot and a steal in just 28 minutes of playing time.

For some additional perspective, I will turn to Army coach Magarity:

"I haven't been in the women's game that long. I came from the men's side. I coached the number two pick in the NBA draft, Rik Smits in college. She is one of the best players I have ever seen. In terms of her instincts, her ability. What an unbelievable nose for the ball. Just tremendous. She's so good in person. I knew she was good watching her on tape but I hadn't seen her live before. So that was in some ways a treat as a basketball person.

It wasn't a lot of fun for these guys [indicating his players]. She's just unbelievable. But we did a pretty good job I thought of keeping her in front of us. We forced her into a couple of tough shots. We doubled her whenever we could. But to her credit, she had four assists. She found people. She's so unselfish. And she still goes for a double double."

Local fans have one last chance to see Thomas live Tuesday night when the Terps take on Texas for the right to go to Louisville and advance to the Sweet Sixteen.