After dropping a game to Florida State in Tallahassee a few weeks ago, Maryland hopes to split the series as the Noles return to College Park for the last time as ACC foes.

Maryland will try to rebound from a tough loss to UNC in Chapel Hill, as they get a rematch game against Florida State in College Park on Saturday, February 8th at 3:00 P.M. The game will be on ESPN2 as Maryland tries to avenge their earlier loss in Tallahassee (and for the one in football, too).

Florida State hasn't exactly been lighting up since their last matchup with Maryland, going just 3-4 since their 24 point win over the Terps. They lost to UVA, Duke, N.C. State and Clemson, while picking up wins against Miami, Notre Dame and Virginia Tech. Do those wins sound familiar?

Earlier in the year, they picked up victories over VCU (85-67), a top-25 UMass team (60-55) and at Clemson (56-41), with their earlier losses coming against Michigan, Florida, and Minnesota. The Seminoles, like Maryland, are 5-5 in ACC play, but despite their similar records, Kenpom ranks the Noles as the 28th team nationally, while Maryland is 68th.

The real question for FSU is whether senior guard Ian Miller will play on Saturday, after suffering an ankle injury in a recent game against Clemson.

For this portion, we'll throw it over to Pete, who did a great job previewing FSU's key players a few weeks ago, but with some updated stats.

Ian Miller, 6'3", senior. Will Miller play - that's the question. He apparently injured it in their game against Clemson and missed their last game against Virginia Tech as a result. It sounds like he won't be playing on Saturday, but Hamilton has been very quiet about the status of Miller, just saying they don't know when he'll be back. Miller is one of the Seminoles' leading scorer, at 12.7 points per game, getting to the hoop (and the free throw line) often. He also leads the team in assists, but turns the ball over at a high rate. He put up 20 against Maryland in their first outing. If he can't go on Saturday, it will not just take a veteran guard away from the Noles, but will alter now they run their offense, shifting some players to different positions.karo White, 6'8", senior. White is Florida State's tallest player who plays at least half of the team's minutes, which means there could be some interesting size matchups on the inside (and the outside). White is an extremely effective scorer, shooting 51.6% from two, 33% from three and 77% from the line while also providing solid work on the boards (6.8 per game, leading the team).

Aaron Thomas, 6'5", sophomore. The leading scorer, at 13 points per game, Thomas is also a major defensive threat who will cause a whole lot of turnovers. He records a steal on 3.2% of opponent possessions -- ranking 164th in the nation -- and is a major part of Florida State's defense-first mentality. On the offensive end, he also drives to the lane with frequency, getting fouled a lot and making 83.5% of his free throws.

Boris Bojanovsky, 7'3", sophomore. Bojanovsky has been playing more as of late, and for good reason -- he's the tallest player on the team, the most efficient offensive player and the team's best shot-blocker. He brings a rare skill-set for a seven-footer, shooting the ball well from the floor (61%). His free throw percentage has dropped from over 70% in their first matchup to  64%, while also ranking 35th in the nation by blocking 10% of opponent shots while he's on the floor. He's playing only 48.5% of the team's minutes due to foul trouble, but is a major presence on both ends when he's in the game.

Robert Gilchrist, 6'9", sophomore. Florida State has been using a big lineup lately, with White at small forward, Bojanovsky at center and Gilchrist at power forward. Gilchrist is a good rebounder, especially on the offensive end, but is a terrible free throw shooter and doesn't add too much on either end of the floor. He doesn't end up with the ball in his hands too much on set plays, but could grab some points on put-backs if Maryland does not box out.

Montay Braydon, 6'7", sophomore. Speaking of big lineups, Braydon has been playing shooting guard in that rotation. Unfortunately for Florida State, he's not a very good shooter, and has the lowest two-point shooting percentage on the team. His biggest strength offensively comes in his ability to get to the free throw line, but he shoots just 61% when he gets there. Braydon also turns the ball over quite a bit, without a high assist rate to back it up.

Devon Bookert, 6'3", sophomore. Bookert splits time with Miller at point guard, and has been used frequently in the Braydon-White-Gilchrist-Bojanovksy lineup. He's second on the team in assists, behind Miller, and the two guards turn the ball over at around the same rate. Bookert is another defensive threat on the 'Noles, forcing turnovers and not getting called for many fouls. On the offensive end, he takes a ton of threes but does not hit many.

Defense, defense, defense. It's been the mantra since Leonard Hamilton took over in Tallahassee, leading to a streak of four straight tournament appearances that ended last season. This year is no different, style-wise, as the Seminoles rank 16th in the nation in defensive efficiency, 4th in opponent effective field goal percentage and 3rd in opponent two point percentage.

If Miller can't go, that is huge for the Noles and for Maryland, making this game a lot more winnable, unless someone comes off the bench and lights it up.

Defensive rebounding, three-point shooting, turnovers. Florida State uses some big rotations, but their only two seven-footers (Bojanovsky and Michael Ojo) get in a lot of foul trouble, leaving them in a tough bind sometimes on the glass. They don't take a whole lot of three pointers, but they don't make them too often when they do, either. Their biggest problem? They turn it over more often than Maryland, on 21.4% of their offensive possessions.

KenPom prediction: Basically, they have this game as a tossup, giving FSU a 53% chance of winning by 1, 71-70.

Our prediction: Maryland, 74-71. With Miller likely not playing, Maryland has a big advantage. Maryland is a much better team on offense and has been playing better at home. They also don't have to worry about FSU being a threat from beyond the arc. Take away one of their best, veteran guards and that should mean success for the Terps.

Plus, how can Maryland lose if they're doing this tomorrow? 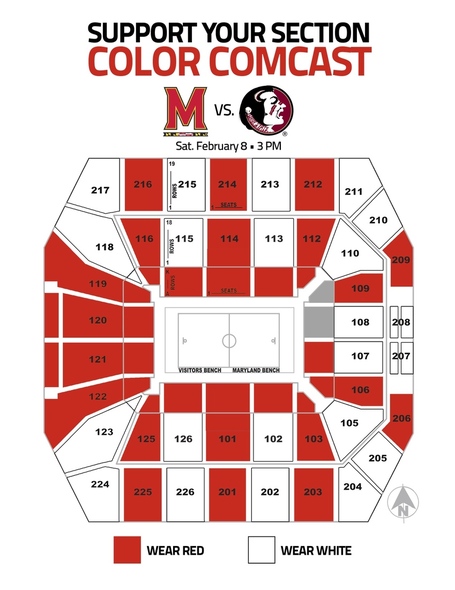