The early enrollee is a candidate to start as a true freshman on the offensive line.

Share All sharing options for: Reviewing the film of Maryland signee Derwin Gray

Please allow me to interrupt everybody's Damian Prince-induced NSD hangover to talk about another star offensive lineman in the Terps' Class of 2014, Derwin Gray.

The stay-at-home movement Maryland is (hopefully) at the dawn of includes a lot of special guys. Prince was the latest, while Stefon Diggs & Wes Brown were among the first. Gray, however, should have a special place in the hearts of Terps fans, even amongst those other exciting local guys. Unlike Prince, Diggs or Brown, there was no real drama with Derwin Gray's recruitment. There were no long and painful weekends in Gainesville, Coral Gables, Columbia or anywhere else. We never had to read quotes about how much he loved Nick Saban or see photos of Gray in the tunnel at the Swamp, even though Gray was plenty talented to commit to a school like that. The reason we didn't go through any of that is simple: Gray loved Maryland all along. He was a Terp long before he officially became one and along the way, he talked the talk, walked the walk, tweeted the tweets and did his best to sell the school he loves to other key recruits who were not as concrete as he was. Derwin Gray, you haven't played a down yet, but you're already a great Terrapin and we salute you. Now let's take a look at some film!

Here is some 2012 film from Gray's senior season at FCA.

Senior season: Gray's FCA team was excellent, finishing 8-3. When the Knights hammered Dunbar (Gray's former school) 48-12 to capture the DCSAA championship, Gray was the lead of the WaPo's game story. Take my word for it as a sportswriter who covers and reads a ton of high school football stories: It's the rare occasion when an offensive lineman stands out so much you find yourself writing about him first, before any touchdowns, skill players or coaches. Gray spearheaded a rushing attack that amassed 245 yards that day.

Gray committed to Maryland out of FCA but needed to clean up his academics, so he prepped last fall at Fork Union Military Academy in Virginia, where he started at left tackle for a team that has a rock-solid tradition of carrying quality prospects from high school to major colleges. FUMA did not have a good season, finishing 1-8, but the most important things Gray did from a Maryland perspective was get his academics in order, get some post-high school reps against bigger and stronger guys, and work on his body and strength. Just take a look at his Twitter photo: 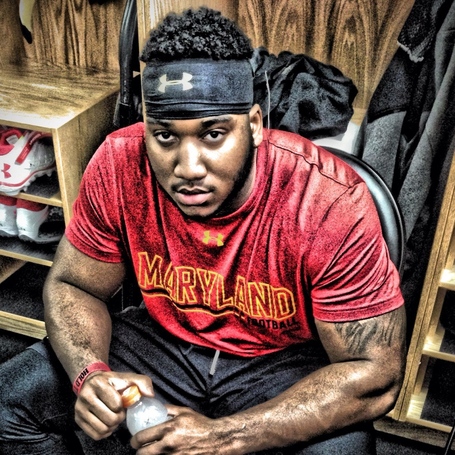 Gray fixed his grades, never wavered in his loyalty, his commitment (and his Twitter love) toward Maryland, then enrolled in College Park last month. So he'll have a jump on OL classmates Prince, Brendan Moore and Sean Christie, who won't arrive until the summer.

Offers: Gray never really seemed like he was seriously entertaining other schools, but just for some perspective, he had dozens and dozens of great listed offers including Auburn, Clemson, Florida, FSU, Michigan State, Ohio State, Oklahoma, Penn State and many more.

On film: Being just a day removed from breaking down Damian Prince's film provides a natural opportunity to compare the two a little bit. First, though, I'll give a quick disclaimer: OL is a very specialized and very technical position. I didn't play OL, I never coached OL and I'm not claiming any special authority on the topic. I'm just a football fan who likes to watch film and offer opinions. Testudbro gave some nice advanced feedback on Prince Wednesday in the comments and then guys like Memphis Raines also have more expertise on the X's, O's and techniques of OL play than I do. So please, you two and anyone else, weigh in below with your own thoughts. I'd love to read them and I'm sure everyone else would too.

In my view, Gray plays a little bit stronger than Prince does and he really extends his blocks and bullies guys down the field, whereas Prince's nastiness tends to happen faster and in a more contained area. Like Prince, Gray is just a mean dude and both get even meaner when they smell blood, so to speak. In the clips where there's a clear mismatch, Gray really abuses the poor, overmatched DL he's checking. You'll enjoy seeing some nice pancake blocks in this film and even more plain old nasty blocks that may not be pancakes but still open giant holes that any pedestrian RB could sail through. Gray's arms and legs work well together, although his hands are not as busy as Prince's are in his film. Gray and Prince both are very athletic and tremendously agile for such big kids. Both have really fluid feet and move naturally, not choppy. Both would make terrific DLs if they weren't so huge and gifted as OLs.

On the downside, Gray does have a tendency to play upright more than Prince, who is just fantastic at keeping low and balanced and shuffling in front of pass rushers. That's an adjustment I think Gray will have to make in college, where size and strength alone aren't enough anymore. Overall, though, Derwin Gray is just a super prospect based on this film. He's big, he's athletic, he's skilled, he's mean, he's everything you want in an OL prospect. There was genuine, and deserved, giddiness here at Testudo Times Wednesday when Damian Prince called Maryland's name. But let's not forget Derwin Gray for even a second. Don't call it a comeback - he's been here for years.

2014 outlook: I haven't seen Brendan Moore or Larry Mazcyk's film yet, but I have watched Sean Christie and am pretty familiar with all the returning OLs. I think I can say with confidence that Derwin Gray is going to be one of the Terps' best five linemen this fall, and thus, a starter. Where will he start? It's a great question. I said in the Prince film review that either he or Gray will be a multi-year starter at left tackle for the Terps and spending more time with Gray's film only fortifies that opinion. One of those two kids, if not both, will be a star and play in the NFL. For 2014, though, it's still early and we don't want to put too much pressure on these really young guys. They need to succeed, not just play. I still like Prince's agility, balance and and busy-ness a little better than Gray's so if I had to guess which one plays on the outside first, I'd still guess Prince. It also could be both, or neither. Gray, with a more deliberate and physical style, with an additional year of S&C and additional semester in the program, could move to the inside to get a year of seasoning at guard. It's all just guess-work at this point. Where do you all expect to see Prince and Gray line up this fall?

Longterm outlook: Maryland loves Derwin Gray, first and foremost, because Derwin Gray loves Maryland. How can you not root especially hard for a kid who was probably the most unwavering and devoted elite Maryland target that I can remember in my seven or eight years as a recruiting junkie? Gray is a gifted OL prospect in a program that badly needed OL help, so he is in a great position to succeed and be a vital and foundational Terp starter and stalwart for three or four years, then hopefully move on to even bigger and better things in the NFL. Thank you, Derwin Gray, for the nearly three years of loyalty and enthusiasm you displayed on your long and winding path to College Park. Terp Nation welcomes you with open arms. Can't wait to see you blowing holes open on Saturdays this fall!