Randy Edsall and Maryland nab their top target in the 2014 class.

Maryland has received the best news possible on the recruiting trail, as five-star offensive tackle Damian Prince has committed to the school and will sign his letter of intent Wednesday. 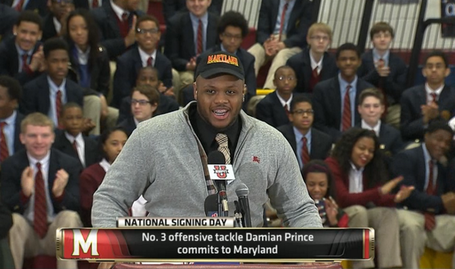 Listed at 6'5" and 295 pounds, Prince is considered a five-star by the 247sports composite, and is rated the 25th-best prospect in the country. He is also ranked as the second-best offensive tackle in the class, and the best player in the state of Maryland.

The Terps beat out Florida for Prince's services, who also received offers from Florida State and Alabama, among many others. He is expected to compete for a starting job from day one on the offensive line, which could see three new faces on the starting unit (Prince, Larry Mazyck and Derwin Gray) next season.

This is a big coup for the Terps, who had seemingly lost momentum in the local recruiting scene as of late, losing out on Tabor, Melvin Keihn, Brock Ruble and Jared Cohen. Maryland still finishes the class with just two of the top 20 prospects from their own state, but they are the top two (Prince and four-star defensive end Jesse Aniebonam).

From the start, Prince was the top target for the Terrapins in the 2014 class, and it's hard to consider the haul anything but a success with his name firmly planted on top of it. This is a huge get for Maryland (their biggest commitment since Stefon Diggs), and one that should have big implications in the immediate future and the long-term.

The Terps did fine against the pass-rush in 2013, but their offensive line was one of the worst at run blocking. That's exactly where Prince fits in, as his raw strength will help provide a push on the line that should provide space for Wes Brown, Brandon Ross, C.J. Brown and Maryland's other weapons.