All the signs seem to be pointing that way.

Via our friends at Alligator Army, it appears there may be some extra-special news coming Maryland's way on Signing Day, as the folks in the know seem to believe five-star local offensive tackle Damian Prince will commit to the Terrapins.

Five-star Florida targets Damian Prince and Lorenzo Carter appear likely to pick their home-state teams on National Signing Day instead of choosing the Gators, according to reports from Rivals' Blake Alderman ($) and 247Sports' Luke Stampini ($).

Alderman's report came first on Monday night, and cites dwindling confidence from Florida in landing Prince, an offensive tackle from Maryland, after his return to his home state following his weekend official visit to Florida. Stampini writes that it "appears" Prince will be staying home and picking the Terrapins on Wednesday. 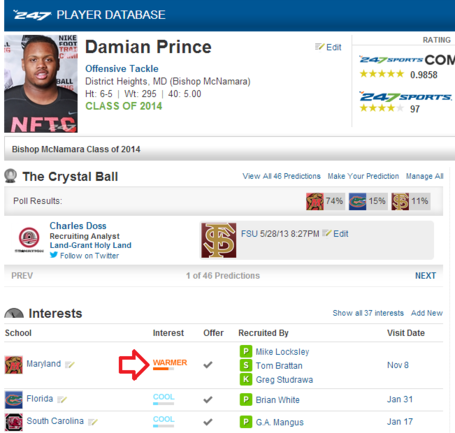 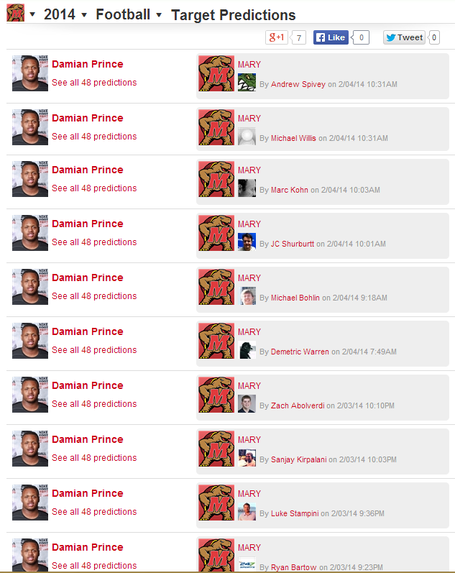 Damian Prince, OT, District Heights, Md.: Even though Prince took an official visit to Florida last weekend, Maryland has had him locked up since late last season thanks to offensive coordinator and quarterbacks coach Mike Locksley. A run-blocking specialist, Prince wants to stay close to home so his family can see him play and has an underdog mentality, ideal for the Terrapins' jump to the Big Ten next season.

So it's safe to say Alderman is not alone in this thought. Prince has been rumored to be a Maryland lean for some quite time, and while Florida (with the help of Jalen Tabor) has made a strong late run at his services, our prediction has never wavered from the Terrapins.

Prince, a five-star recruit, is listed at 6'5" and 295 pounds, and is considered the second-best offensive tackle in the country. He would likely start at Maryland as a true freshman on the offensive line, at one of the two tackle positions.