In a busy weekend,wrestling wins two dual meets in two days; gymnastics continues to ring up solid scores; and softball gets their first win.

The weekend that started with Valentine's day was a busy one for Maryland athletes and some of the results gave Terp fans something to love while others left them feeling a bit jilted. First, in case you missed them, you can read about matching 14-3 wins by women's and men's lacrosse over UMBC here and here. You can also read how women's lacrosse fared in their home opener against Richmond. The baseball team opened their season with a three game set taking on the Florida Gators in Gainesville. Coverage is here, here, and here.

For those of you who simply can't get enough Maryland sports information, this is your chance to read about the softball team's struggles as they opened their 2014 campaign with ten games in Florida, as well as stories about the surging Terrapins wrestling and gymnastics squads.

We'll start on the wrestling mat since I scooted over to the Pavilion after Saturday's lacrosse game and saw most of the meet against NC State. In their final ACC dual meet, the Terps evened their league record to 3-3 pinning the Wolfpack by a 23-14 final in the team score.

The meet opened at 197 pounds where the Terps' eighth ranked Christian Boley scored a late takedown to win his match by a 3-2 margin. In a titanic heavyweight match, Spencer Myers, ranked sixth in the country took on NC State's seventh ranked Nick Gwiazdowski. Gwiazdowski raced out to an early lead and Myers rallied furiously in the third period getting the State wrestler in pinning position but just unable to finish and Gwiazdowski held on for the 11-8 decision evening the team score at three.

Billy Rappo,Tyler Goodwin and Shyheim Brown put the Terps back on top with three consecutive decisions at 125, 133 and 141 pounds winning by 3-2, 4-2 and 4-2 margins respectively. Tyler's big brother Frank electrified the Pavilion crowd with a series of takedowns and near falls before finally securing the pin against Brian Hamman. The three bonus points from the fall gave Maryland what looked to be a secure 18-3 lead with just four matches left.

But it wasn't going to be easy. Two of the next three State wrestlers were ranked in the top twenty in their weight classes and it showed as the Pack went on a three match winning streak that included two major decisions and pulled NC State within four at 18-14.The final match was something of an ace in the hole for Maryland as top ranked Jimmy Sheptock took to the mat against Shayne Brady. Sheptock, celebrating the anniversary of his birthday, made quick work of the Wolfpack freshman registering a 16-0 technical fall for his twenty-third consecutive dual meet win this season. The two bonus points gave the Terps a comfortable 23-14 team win. 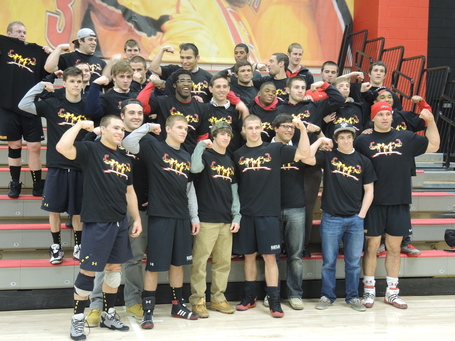 Meanwhile, up in the main gym, in a meet that ran concurrently with the men's lacrosse game, the Maryland gymnastics squad continued to build momentum as the season draws toward a close. The Terps remained undefeated at home winning the tri-meet with Bowling Green and Yale bringing their overall record to 6-3. More importantly, Maryland registered another strong team score with 194.675 points. The team scores are used to determine team rankings.

As always, the host team opens on the vault. Emily Brauckmuller got the Terps off to a solid start with a solid 9.625 score. Stephanie Giameo's 9.80 was Maryland's highest score and good for third place on the event but freshman Sarah Faller and senior Karen Tang each scored solid routines of 9.75 to lift the Terrapins to a team total of 48.575.

Maryland moved to the bars for their second rotation and Elizabeth Manzi led things off with a personal best and meet high score of 9.80. Karen Tang and Jessie Black followed closely scoring 9.775 and 9.75 respectively as the Terps took the top three spots on the apparatus.

After a strong showing in their last meet, a confident Maryland team moved to the balance beam. Ebony Walters seems to have regained her footing on this event as she and Faller both rung up strong 9.75 scores. Karen Tang, competing in the all-around for the first time this year, pulled in a solid, if unspectacular 9.525. But the star of the night was Giameo. The All-American scored 9.875. Though this was a full tenth of a point higher than the second place finishers from Bowling Green, many in attendance thought Giameo deserved a 10.00. 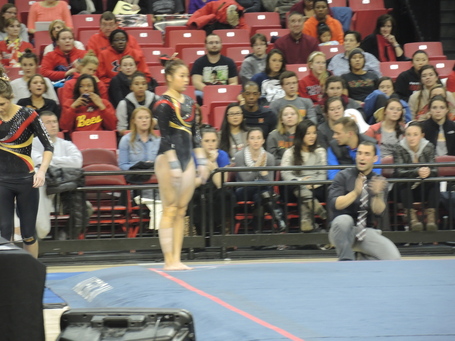 The Terps then moved to the floor exercise - an event that has been solid for them all season. Though she couldn't quite match the 9.9 from the last meet, Walters did score an impressive 9.80. However, on this night, the event belonged to Karen Tang who tied for the top spot with a score of 9.875. The core gave Tang second place in the all-around behind teammate Stephanie Giameo and secured the meet win for Maryland.

A Slow Start for Softball

The Maryland softball team got off to a discouraging start for the season in two tournaments in Florida. After starting the season 0-5 at the Florida International Tournament last weekend - losing twice to the host, twice to Jacksonville and once to DePaul, the Terps came into this weekend's Florida Atlantic Tournament hoping to reverse the trend. After splitting two games on Friday, losing 3-1 to Mississippi State, Maryland bounced back in the nightcap to get their first win of the season defeating a solid South Carolina team 8-4 for their first win of the season. However, they couldn't carry any momentum into the rest of the weekend dropping the three remaining games losing to the Gamecocks, the host school, and Long Island University.

Right now the Terps are in one of those funks where they are having difficulty matching success in one aspect of the game with effectiveness in the other. When they've gotten good pitching their hitting has suffered and when the offense has been clicking, the pitching has fallen short. This is an issue the Terps need desperately to correct as they head west for the toughest weekend of the non-conference schedule.

Coming back to the Pavilion, the Terps faced off on senior night against the American University Eagles in their final home dual meet of the season. Following the ceremonies honoring the seniors, the meet got started with Paul O'Neill wrestling seventh ranked David Terao at 125 pounds. Terao dominated early taking a 7-3 lead into the third. O'Neill rallied with an early escape and a takedown in the middle of the period to close to within one. He nearly got a late takedown but couldn't quite gain control and his comeback attempt for the upset fell just short.

Tyler Goodwin dropped his match at 133 pounds before Shyheim Brown got Maryland on the board with a 7-3 decision at 141 pounds and Frank Goodwin gave Maryland its first team lead of the night registering a 9-0 major decision at 149 pounds earning a bonus point putting the Terps up 7-6.

Danny Orem dropped his match at 157 pounds allowing AU to retake a 9-7 team lead. The Snook brothers came up next for the Terrapins at 165 and 174 pounds respectively. and both registered decisions - Josh took a 6-0 decision that included a point for over 3 minutes of riding time while brother Ty scored a 5-2 decision scoring an escape and a takedown with just under a minute left after entering the third period tied at two. The back to back wins by the Snooks propelled the Terps into a 13-9 team lead.

Next up, top ranked and undefeated Jimmy Sheptock, dominated his match against the Eagles' Jason Grimes at 184 pounds from the outset with an early takedown and two near fall points. The senior extended his unbeaten string to twenty-four just missing a fall but securing a major 12-2 decision and a 17-9 team lead for Maryland. 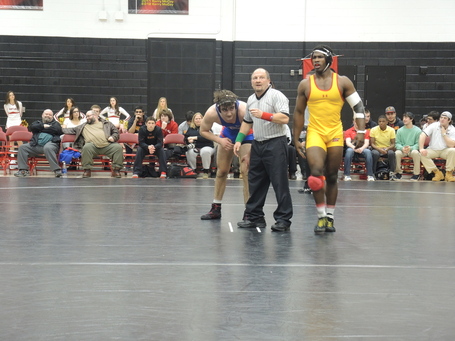 At 197 pounds, Christian Boley effectively used a single leg attack to score three first period takedowns on his way to an 11-4 decision that sewed up the team match for the Terps who held a 20-9 lead entering the heavyweight bout. The lead allowed Coach Kerry McCoy to rest Spencer Myers and reward Carl Bucholz letting him wrestle on senior night.

Those of you who follow wrestling know that Bucholz is a transfer from Rutgers who shared heavyweight duties heavyweight duties with Dallas Brown last season when Spencer Myers was recovering from an injury. Buckholz started the season very well for the Terps before fading toward the end and he didn't wrestle in the ACC Tournament.

Those of you who follow football closely will recognize Bucholz as a walk on fullback for the 2013 Terrapins. Though he didn't appear in a game, he was voted as the scout team player of the week by his teammates for his work in preparing for the Clemson game,

Bucholz and AU's Blake Herrin wrestled to a scoreless first period. Herrin chose to start the second period in the down position and Bucholz not only rode out the period to gain a two minute riding time advantage but he turned his foe and scored three near fall points. Though Bucholz was issued a stalling penalty he held on for a 5-1 decision.