My first and last trip to Duke

It wasn't the outcome Maryland fans wanted, but it was exactly the kind of trip I was hoping for.

Share All sharing options for: My first and last trip to Duke

I became a fan of Maryland watching Joe Smith play as a kid. Ever since then, Duke and Maryland have been rivals -- whether or not one side would ever admit it.

I don't know if non-rivals pack the student section 90 minutes before the game and have a guy with a megaphone barking out orders.

"This is a big f****ng game on national television, we can't screw this up" he said.

This was, and always will be, a big f****ing game. For both sides. The game itself was exactly what the two sides deserved in their final regular season meeting: an instant classic.

Obviously, Maryland fans will wonder "what if Charles Mitchell's shot went in?" and rightfully so. Mitchell would have been remembered forever as the final Duke killer.

First and foremost, Durham is home to some amazing barbecue and that alone was worth the drive down. Obviously, so was seeing Cameron Indoor Stadium. It's hallowed ground of college basketball for a reason and it did not disappoint at all.

It started off with a stroll past K-ville, although as we found out the snow and cold temperatures allowed a grace period for all students there so it wasn't as big as I expected. 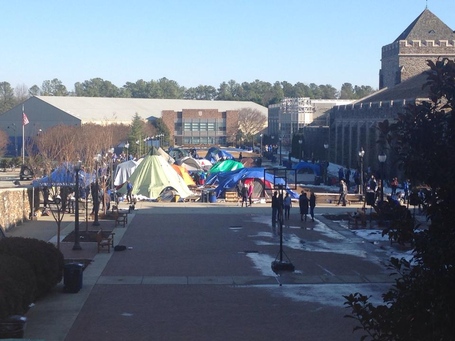 There are some bizarre rules to K-ville. More power to those kids.

Maryland press, due to the snowstorm, never received their credentials before the game, so we had to wait until 4 o'clock for the stadium to officially open so we could get in.

"Why don't you go to the athletic hall of fame to pass the time," the security guard told us.

Well that was incredibly depressing with all their championships, All-Americans, and the shrine to Coach K. 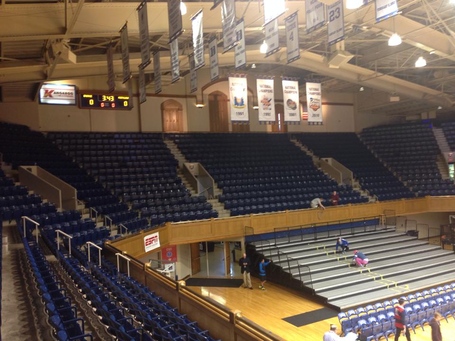 As visiting media, we were lucky enough to be given a tour of the building right before we were allowed in to our seats. It was kind of amazing seeing the history of the building and realizing the place barely holds 9,300 people and is still deafening. 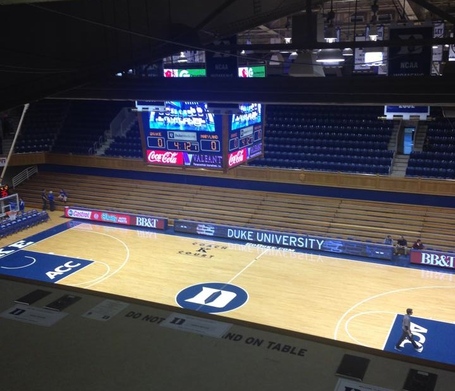 Even being in the rafters wasn't a bad thing and still had a perfect vantage point.

I'm sure every school pre-plans some chants and has some wacky fans, but this all felt very forced. It felt like these kids weren't normally fans of sports in daily life, but like Duke basketball because they have to. That said, they were incredibly loud and clearly very passionate about Duke basketball. 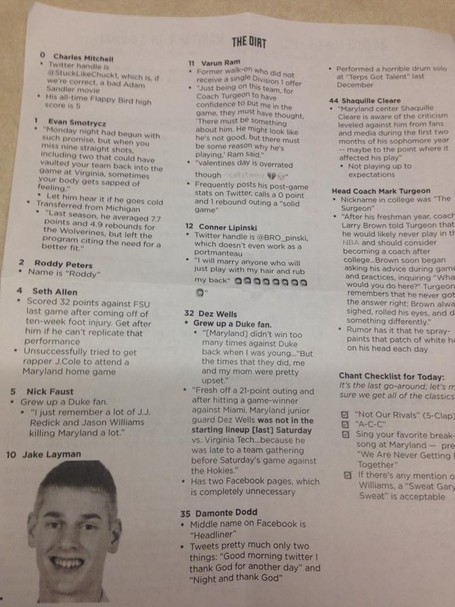 As you can see they are quite creative... also, portmanteau jokes! They never did the Taylor Swift song, unfortunately. 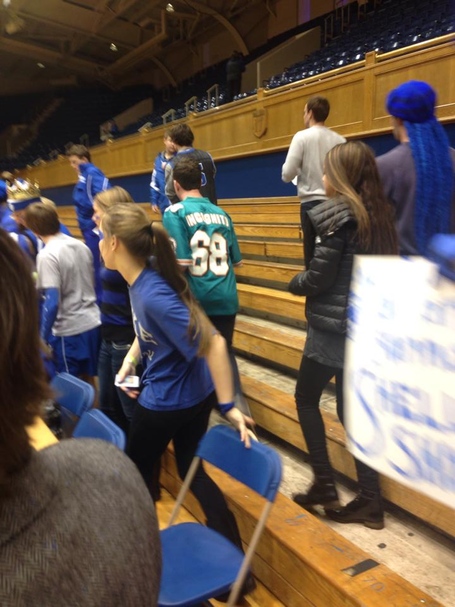 Two words: instant classic. There were about twenty different moments in the first half where I thought this was going to be a blowout and I (unfortunately) thoughMaryland had no shot. I also thought if Maryland won the game, there might be a riot on our hands and I had no means of escape. 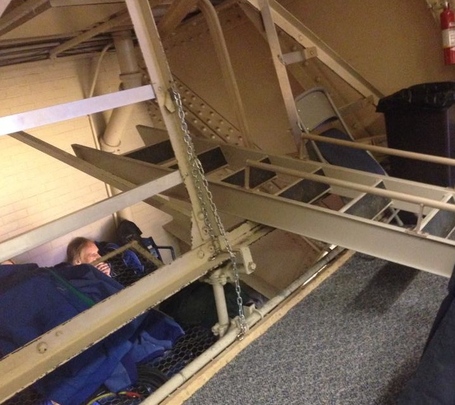 This didn't go back down until the end of the game. Seriously, that was terrifying for me and my bladder. Although I would have much rather been sitting up there, rather than sitting down on the floor with the Crazies.

@BrendanDarr For us newspaper folk, we've had our stories read back to us (and critiqued) as we write. It's wild.

Still, the Maryland comeback in the second half was as incredible as it was improbable. Maryland had cut it to 32-31 in the first half, only to see Duke go on a 7-2 run to end the first half. I know some of the other staff members were confident, but I was not among them.

Wells, who got into foul trouble in the first half, went on a tear and put the Terps on his back. He had all 17 of his points in the second half and he almost bulldezed his way to a win.

Ultimately, it came down to an unlikely hero in Charles Mitchell -- and while it wasn't the look (either time) that Mark Turgeon was looking for, he admitted they wouldn't get any better looks than that, and Mitchell had been killing them inside all day.

The ball hung on the rim for what felt like an eternity.

We had very little insight into what was happening at the arena on both the shot-clock violation and the phantom change of possession.

There were very few replays inside Cameron Indoor for anyone to figure out what was going on. In fact, during the shot-clock violation timeout, they showed the Jabari Parker dunk on Damonte Dodd a half-dozen more times rather than the play in question.

The phantom change of possession was also difficult to spot because Duke's scoreboard doesn't have a possession arrow on it. As we found out, the change was "official" on the ESPN broadcast, but the stat-tracker clearly showed Duke got two calls in a row.

So thank you, twitter, for letting me know what was going on during the chaotic moments of the game. 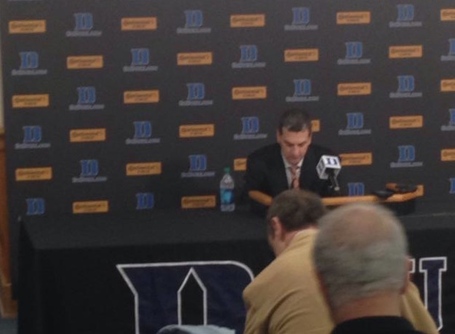 Turgeon was emotional. You could tell how much this meant to him and the program. He made it clear they were trying to win this game for all the past coaches and players and all of the fans.

On the way home we stopped for food and one of the employees saw my credential and asked how the game was. He then told me "Well, hopefully Maryland has better luck next time down here, for you."

He was completely unaware there will be no next time and he wasn't trying to be rude. He just didn't realize Coach K has said he won't play Maryland again.

All-in-all, it was exactly the trip I had been hoping for ever since 8-year old me started watching Joe Smith play and a fitting way for the Maryland-Duke rivalry to come to a close. Maryland scrapping until the end against a much better team -- and nearly pulling the upset.