During Saturday's Maryland game against Duke, it appears the officials incorrectly awarded a possession to the Blue Devils that should have gone to Maryland.

Share All sharing options for: Did officials incorrectly award possession to Duke?

[Update] - Alex Prewitt of the Washington Post contacted the ACC about the situation and the conference acknowledged that a mistake was made and that "the matter has been and will be handled internally by the league office." Not sure exactly what that means, but it sounds like that's the end of the matter, at least from Maryland's perspective.

As if Saturday's loss to Duke wasn't heartbreaking enough for Maryland fans, this morning, Patrick Stevens noted that the Blue Devils were incorrectly awarded a possession that should have gone to the Terrapins based on the possession arrow.

For those asking about possession arrow issue in the Maryland-Duke game, it sure looks like someone messed up based on a day-after viewing. 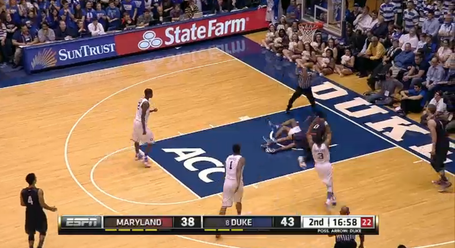 Smotrycz had his shot blocked and both teams ended up with players on the ground going for a loose ball. You can clearly see the officials signal jump ball and you'll notice on ESPN's screen, under the "2nd|16:58" it says Poss arrow: Duke.

Duke gets the ball, and as they're inbounding, you can clearly see on the screen below that ESPN changes the arrow from Duke to Maryland. 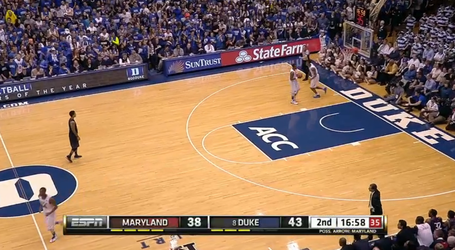 The rest of the second half continued without a jumpball. The next one came with 6:39 left in the game, under Duke's basket. 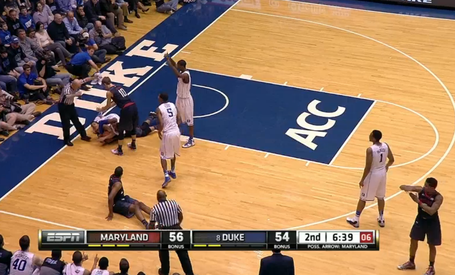 As you can see, the possession arrow is still shown in Maryland's favor on the screenshot above. Seth Allen dives for a loose ball and before a Duke player can jump on top of him to try to force the jumpball, you can clearly hear Jake Layman shouting "TIME OUT! TIME OUT! TIME OUT! TIME OUT!" You can also see Layman, who is standing above Allen, and Nick Faust, making the timeout signal, but the officials don't award it to them and instead call it a jump ball.

What's interesting is that the ESPN broadcast crew says "Maryland ball. On the possession arrow, the Terps will have it."

The officials then huddle and the ESPN crew believe they're talking about whether Maryland got a timeout before the jump ball was called. 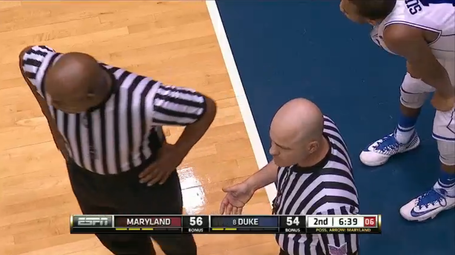 The officials talk about it and then they just give possession to Duke. Why? No one knows, at this point. I haven't been to Cameron Indoor, but in reviewing the film, there doesn't appear to be a possession arrow indicator on the scoreboard above the court or on the scoreboards above the seating bowl behind each basket. There also doesn't appear to be one on the side of the court opposite of the player benches. I suppose there is one on the side of the court where the player benches are, but you never really get a clear shot of that side of the court due to the camera locations at Cameron Indoor.

ESPN is clearly confused about what happened. They show the possession arrow in Duke's favor as Duke inbounds the ball incorrectly. 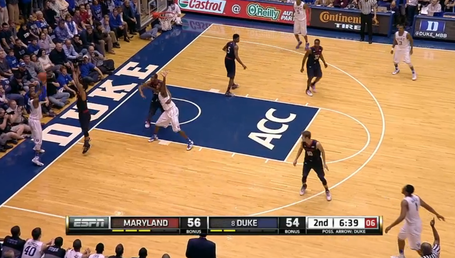 A few seconds later, ESPN has again switched the possession arrow back to Maryland. 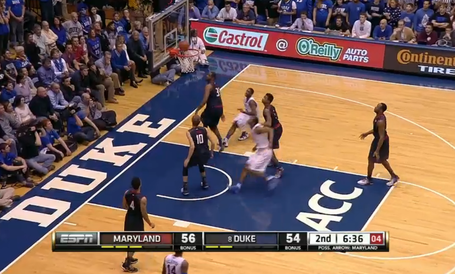 The ESPN broadcast shows Turgeon jumping up and down at the other end of the court, but nothing is really done before Duke quickly inbounds the ball and scores. I don't know if Turgeon asked for clarity about the possession arrow at the next dead ball opportunity, but regardless, the game quickly continued on and Maryland lost by two.

Additionally, another observation from that play that should have invalidated it being called a jump ball - the Duke player was out of bounds.

One additional note about all of this - some suggested on Twitter that the reason Duke got the ball might be because the officials, when huddling, thought Seth Allen kicked the ball. The only problem with that theory is that had that been the case, the shot clock would have been reset to 15 seconds. NCAA rules say that a shot clock reset should occur based on Sec 11, Article 6-F which states:

When an intentionally kicked or fisted ball occurs with 14 seconds or less
remaining, set to 15 seconds;

As you can see from the above sceenshots, the shot clock is not reset, meaning they didn't call a kicked ball.

I don't know if Maryland can file a complaint and if they would if they could, but we'll certainly continue to monitor the situation. I'd be curious to know if Mark Turgeon and his staff noticed the mistake and if they did, did they ask the officials about it?

We'll keep you updated if any additional information because available. But for now, this situation seems to sum up Maryland's luck, or lack thereof, when it comes to playing on Tobacco Road.

Next Up In Men's College Basketball