We continue our series looking at some of the most important and memorable basketball moments during Maryland's time in the ACC.

With Maryland finishing their last season in the ACC, we will be reviewing some of the most important and memorable ACC games involving Maryland. Today, Pete talks about Duke.

There are plenty of games that Maryland has played against Duke that have been more important than the one I'll talk about today, but there are none that were more important to me (a hint for all of you that didn't read my Georgia Tech version of this: I was at this game).

The 2009-10 season was a pretty incredible one for Maryland basketball. The team lost just one home game all year long -- a weird, late December loss to William & Mary (the only home game I didn't attend that year, coincidentally) -- and took home their first regular season conference title since the national championship season (and just their sixth ever).

On March 3, 2010, all of that was still very much in the air. Maryland had won five in a row, including that dramatic buzzer-beating win over Georgia Tech, but had to host No. 4 Duke, led by Jon Scheyer, Kyle Singler and Nolan Smith. Maryland had played just three games against ranked opponents all year long, losing two of them (including a 21-point beatdown at Duke).

The game also happened to be the last home game of the year, making it Senior Night for Greivis Vasquez, Eric Hayes and Landon Milbourne. The Terps hadn't defeated Duke in their past six attempts, and came into the game as slight underdogs despite the winning streak and the homecourt advantage.

It did make sense, looking at the makeup of Duke's team and the absolute blowout result of the last meeting between the two programs. But Vasquez and the Terps had other ideas.

Maryland jumped out to a quick lead thanks to some exciting and athletic play in transition, forcing turnovers and running the fastbreak effectively. The most notable such fastbreak was this one, in which Jordan Williams caused Comcast Center to erupt:

Marylad took an early 14-point lead that was trimmed down to two points by halftime after Duke made some defensive alterations. It was 40-38 Maryland at the break, and while the Terps held on to the lead, it was hard not to feel like Duke had grabbed the momentum and would blow the home team out of the water in the second half with their new-found defensive prowess.

But that didn't happen.

Sure, Duke took the lead nine seconds out of the break, and held a two-point lead with less than five minutes to go, but it was clear that this was going to be a hard-fought game until the end. Both teams traded buckets for nearly the entirety of the second half, as the crowd at the Comcast Center grew louder and louder throughout the night.

With just under three minutes to play, Nolan Smith hit a jumper to tie the game at 67-67. You can go ahead and watch the last three minutes of the game right here. It's worth your time:

To start things off, Eric Hayes hit a running layup while jumping away from the hoop, which kind of gives you an idea of what's about to go down. Scheyer made it past Vasquez and into the lane to make a shot over Williams to tie it back up.

Sean Mosley missed Maryland's next shot, seemingly giving Duke the chance to take the lead. Take a look at the great position Brian Zoubek had inside on Williams when the shot hit the rim: 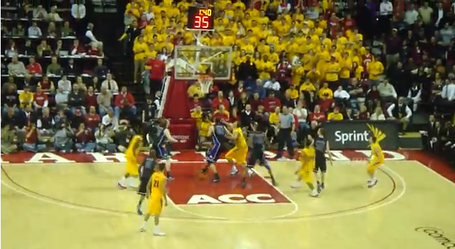 Williams out-muscled him and was able to tip the ball back in, giving the Terps the lead again. Duke took a loooong possession on their next trip up the floor -- too long. Scheyer and Smith both missed three pointers, giving the Terps the ball back with 69 seconds left to play and a two-point lead. Vasquez rebounded the second miss, calmly dribbled up the court and eventually burst through the lane with 10 seconds left on the shot clock, making the unbelievable, off-balanced shot that will forever live in Maryland folklore. 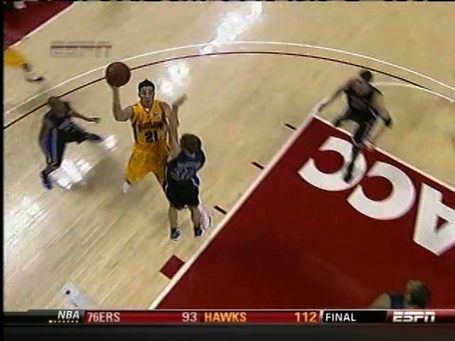 That did it in for Duke. Sure, there were other possessions (Maryland outscored the Blue Devils 6-3 the rest of the way), but once Greivis's shot sank in, Comcast Center rose to new levels of noise. Doubters became believers in that instant, as it became unquestionable that the Terps were going to win this game.

For those wondering, I was in the second row of the student section, directly to the left of the (second half) Maryland basket from the camera angle in the video. After the game was over, I rushed the court and high-fived Hayes. It's still the best sporting experience of my life.

Maryland ACC memories: Looking back on some memorable moments in ACC Basketball