Looking back at Maryland's 2013 upset of No. 2 Duke at Comcast Center

Share All sharing options for: Duke Memories: A last hurrah at home

It is no secret that College Park is obsessed with beating Duke. If you don't already know this from years of growing up as a Maryland fan, you learn starting from the second you set foot on campus as a student, and you learn very quickly. My freshman year, the university even sponsored a "Beat Duke" week of events, complete with constant handouts of "Beat Duke" T-shirts and pins.

After the move to the Big Ten was announced, it became relatively clear that the "Duke game" on Feb. 16, 2013 would be the last time -- at least for a while -- that the then-No. 2 Blue Devils would make the trip to College Park. Fans were itching to break the streak of four straight losses to Duke, while Mark Turgeon was still seeking a signature win in his young Maryland tenure.

I won't go into huge depth about the game itself, as it was less than a year ago and I'm sure it's still fairly fresh in most of your minds. The inexperienced Terps fought their way to a one-point lead at halftime and came out just as focused in the second half. The lead ballooned to 10 at one point in the early second half minutes, and I remember sitting in my seat just waiting for the other shoe to drop; expecting Duke to make its run and silence the raucous Comcast crowd.

The run did come, but the Blue Devils were never able to get over the hump. The Terps were playing with a newfound fight and scrappiness, and while they made their share of mistakes -- this was the game where Seth Allen had eight turnovers -- they never gave in.

At the front of it all, of course, was Alex Len. Len scored 19 points and grabbed nine rebounds on the night, and, perhaps even more importantly, completely shut down Mason Plumlee, who finished with a measly four points and three rebounds. But while Plumlee was held in check by Len, Seth Curry proved to be a huge thorn in the Terps' side.

Curry went off for 25 points on the night, including two back-to-back threes in the final two minutes that improbably cut Maryland's lead down to two. And after Jake Layman went one-of-two from the free throw line, sending Duke to a final possession down three, Rasheed Sulaimon was fouled shooting a three-pointer. He made all three, and suddenly the game was tied for the first time in 18 minutes. But you know the story from here: Seth Allen took the Terps final possession to the basket, drawing a foul and hitting both of his shots, sending Comcast Center into an absolute frenzy. 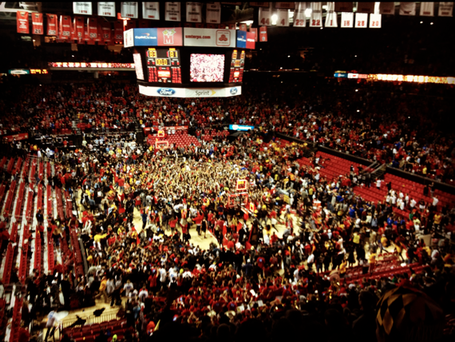 The win was so important to Mark Turgeon that he his eyes welled up during an emotional post-game press conference.

"I wanted to beat Duke," he said that night. "This means a lot to me."

Maryland's season might not have gone the way fans hoped after that night, but it was nonetheless a very special evening. And as someone who is (barring a miracle) not going to see the Terps make an NCAA Tournament during my time here, this win is my greatest memory as a student. It was the single-greatest atmosphere I've ever been in at a sports game, and something that gives me chills just thinking about it.

Oh yeah, and this game also gave us this, which was incredibly fun to be a part of. It's currently up to nearly eight and a half million views on YouTube, by the way:

Maryland ACC memories: Looking back on some memorable moments in ACC Basketball