The new indoor facility at Cole Field House is a game changer for the University of Maryland in football, recruiting and their relationship with Under Armour.

Share All sharing options for: How Maryland's indoor facility could take the football program to the next level

When the University of Maryland and Under Armour first entered into an agreement five years ago, making the increasingly popular sports apparel company the school's official outfitter, many wondered how large of an influence the company could have on the school. Could Under Armour and founder/CEO Kevin Plank, a Maryland alumnus and former Terrapin football player, do for Maryland what Nike CEO and Oregon alumnus Phil Knight did for Oregon? Could Under Armour help grow and influence the popularity of Maryland's football program similar to how Nike helped bring Oregon football into the national spotlight?

Reaching the level of success Oregon has seen in recent years is probably a stretch -- at least for now. One thing is abundantly clear in the wake of Maryland's new $155 million indoor facility, sponsored in large part by Under Armour: if the Terrapins are to take the next step in the college football landscape, their opportunity has arrived.

Phil Knight, Nike's current CEO and one of the founders of the company, has been instrumental in the growth of Oregon's football program, investing millions into his alma mater. Knight's investments, including those by Nike, have given Oregon a national brand through the use of unconventional uniforms and flashy new facilities. Sound familiar? The latest investment in the school by Knight, Oregon's recently opened football facility, is an over the top monument to Knight that puts his dedication to the school and their football program, on full display.

Maryland, which recently extended their partnership with Under Armour for an additional ten years, appears to be using Oregon's model in an attempt to move from a middle-tier football program to a potential national power. This all starts with the "Maryland Pride" movement. One of the Terps' few advantages over Oregon as a program is their considerably deeper local talent pool. The "Maryland Pride" movement has attempted to play into that, starting with these iconic uniforms in a nationally televised game against Miami and leading to commitments from elite local talents like Stefon Diggs, Damian Prince, Yannick Ngakoue and Jesse Aniebonam. 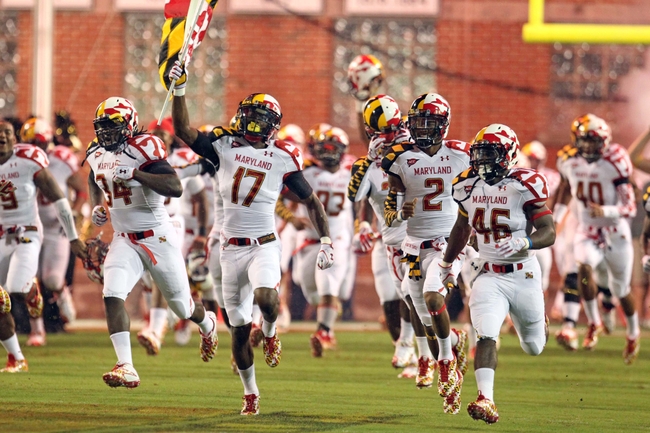 When head coach Randy Edsall was hired to replaced Ralph Friedgen, he was brought in to rebuild and re-imagine the football program at the University of Maryland. The program has been an erratic one over its long history, especially under Friedgen, whose strength as a head coach came as a tactician. Maryland had the potential to pull off upsets and compete for conference titles, but also carried the potential to lose to lesser programs like Middle Tennessee State and follow up successful seasons with complete duds (two straight losing seasons after three straight double-digit win campaigns, a 2-10 season after three straight bowl games).

Kevin Anderson's now infamous "good to great" quote regarding the switch from Friedgen to Edsall was a mistake. That much is clear. To go from an erratic program built by a master tactician to a consistent bowl team built from the bottom-up required a major re-build, and Anderson's quote helped set outsized expectations for the start of the Edsall era. When growing pains arrived during the head coaches first two seasons in College Park (and boy, did they ever), fans were understandably frustrated after Friedgen's nine-win season in the final year of his tenure. But with what is looking like a third straight season wherein Edsall has increased his win total, it's becoming clear this rebuild is starting to come into focus.

Edsall is building a program with depth, one that can survive if the injury bug hits and one that has unquestionably succeeded in their first Big Ten season. His staff has made it a point of emphasis to recruit locally utilizing the "stay at home" mantra, successfully convincing several of the state's top recruits to play for the Terps (and the 2016 class could be an historic one, if everything goes right). Maryland has launched a fashion craze that has put the state's flag on virtually every type of clothing and accessory possible. They've successfully migrated to a football orientated conference, while also realizing the largest attendance gain of any school nationally this season. What's the next step in the Maryland Pride movement?

A game changer for a football program and University

"This project brings together two of my favorite passions, Maryland athletics and entrepreneurship" -Kevin Plank, Under Armour CEO

One of Maryland's glaring weaknesses as a football program was the lack of an indoor facility. Every single school in the Big Ten (yes, including Rutgers) has an indoor facility, as does every national power. Maryland was the odd school out within their conference, and beyond the need to keep up with recruiting rivals with facilities, the new building will have countless advantages for the program in training, academics and national profile. This facility won't just bring Maryland up to the Big Ten and national standard -- this facility will be among the most advanced in the country. Basically, what Maryland is building is some next-level stuff:

"This project brings together two of my favorite passions, Maryland athletics and entrepreneurship," said Kevin Plank in a press release from the school. "The lessons I learned on the football field in College Park continue to fuel my entrepreneurial spirit and shape my professional approach. By fostering a generation of entrepreneurial-minded young adults, we are preparing our students not just for the next four years, but for many years to come."

The impact of this facility will not just be felt by the football program, but by the university as a whole. The facility will launch a new entrepreneurship program, while also creating The Center for Sports Medicine, Health and Human Performance, a collaborative effort with the University of Maryland, Baltimore.

So how will this new $155 million dollar facility continue to help Maryland grow its football program?

The impact on recruiting

The biggest fallout of this new facility may come on the recruiting trail, where Maryland coaches can sell the new building to elite local recruits, who previously would have to travel out of state to find this sort of state-of-the-art training complex.

We asked SB Nation recruiting editor Bud Elliott to weigh in on the facility's impact with recruits:

This facility is a big deal. If you're a biology major, you want to have a great lab. A concert violinist wants the best acoustic practice rooms. And if you're an elite football recruit, you want the best in training and practice facilities.

Football players spend a ton of time on football activities. They watch film, they workout, they practice, they have position group meetings, they eat and they get treatment for their injuries. Now, Maryland's players will be able to do that all in the same state-of-the-art facility. No trudging across campus to get treatment for that strained hamstring.

The all-encompassing format of the facility is a major benefit to the players, and it also benefits because it forces players to be around each other more often, which can foster the sense of team and increase closeness. And it increases the amount of time coaches and staff have to observe the players in one spot. If something is bothering a kid, this increases the chance that someone will spot it. Maybe that spotting of something results in a phone call to his parents, or his high school coach, and the kid gets the little bit of extra help of inspiration he needs to not fall into an academic tailspin. There's plenty of hidden benefit to having everyone around each other in one facility, as a family.

This is clearly a first-class facility. Not only can Maryland sell this facility to recruits, but perhaps equally important, other schools are not going to be able to negatively recruit against the Terrapins. They will not be able to question Maryland's commitment to developing every aspect of the student athlete.

We're going to have to wait a few years to see this finally take place -- the facility is scheduled to be finished between 2017 and 2018 -- but the photos and the master plan could be enough to sell some local talent. The 2016 class is absolutely loaded, and many of those top kids are strongly considering Maryland. If the Terps can start bringing in those recruits with consistency, the program could reach a sustainable level of success not seen in a long, long time.