Testudo Times has learned one of Maryland's vacant coaching staff positions has been filled.

Maryland has filled one of their vacant coaching staff positions, as Testudo Times has learned the Terrapins will hire Ball State defensive line coach Chad Wilt. Presumably, Wilt will have the same role at Maryland.

Wilt was the recruiting coordinator and defensive line coach for the Cardinals, one of the most successful non-power conference teams in the country this season. In 2013, Ball State recorded 27 sacks (sixth in the MAC) and 74 tackles for a loss (fourth in the MAC). Those numbers increased in each of his three seasons with the school -- in 2011 the team ranked 11th in the conference in sacks and 12th in tackles for a loss, and in 2012 they ranked eighth and 10th in those categories, respectively.

This season, Wilt's two best players were Jonathan Newsome (eight sacks, 11.5 tackles for a loss) and Nathan Ollie (four sacks, 10 tackles for a loss). Newsome was named first team All-MAC, while Ollie was named second team. Ball State went 10-3 this season, with a 7-1 record in their conference and a three-point loss to Arkansas State in the GoDaddy Bowl.

While Wilt has no specific recruits tied to his name, Ball State boasts the second-best 2014 recruiting class in the MAC, headlined by six three-star recruits (not a bad haul at all for a school on that level). His recruiting areas at Ball State covered Indiana, Ohio, Missouri and Illinois, so this seems to be another move to expand Maryland's Big Ten footprint.

Prior to his time at Ball State, Wilt also worked at Richmond, Virginia, Liberty, Central Connecticut State and William & Mary. While with the Cavaliers, he helped lead them to their second-to-last bowl game -- the 2005 Music City Bowl. 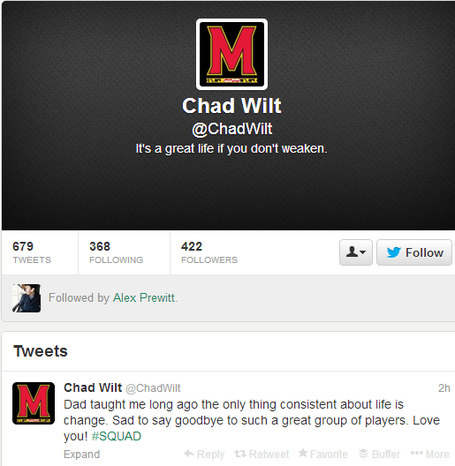