Share All sharing options for: Talking Terps: Who is Maryland's point guard?

Editor's note: FlaTerp and I were talking over e-mail about Maryland basketball, as one does, and we decided to turn it into a post. Hope you all enjoy.

FlaTerp: So, watching Pitt destroy Maryland the other night bothered me for reasons beyond the obvious gut-punch sensation of any bad loss. This particular setback was painful specifically because Pitt has a handful of guys who come from the Terps' own backyard, and who could really, really help this team. The case can be made that Bishop McNamara's own Talib Zanna is precisely the tough, savvy senior big man the Terps don't have and sorely need. But I'd like to focus more on DeMatha product James Robinson, who Maryland recruited but who left the them out of his top-five and then became an immediate starter as a Panther freshman point guard.

Pete: Although it's not exactly a good enough excuse, you have to imagine the pursuit of the Harrison Twins played at least a minor factor in Maryland's inability to grab a premier PG during that time period. Guys like Rysheed Jordan most likely did not have a commitable offer, at least to start, and that's going to hurt your standings in the long run. It's hard to blame the coaching staff for betting the farm on the Twins, but it undoubtedly hurt them in the long run in terms of the PG thing. Another thing that I think has to be mentioned is what happened to Sam Cassell, Jr. He was supposed to be a part of that 2012 class (Robinson's class), but a bizarre NCAA ruling ended up sending him elsewhere. I think Maryland's guard situation looks quite different if Cassell was allowed to enroll.

FlaTerp: Whatever the reason he wasn't playing for the good guys on Monday, Robinson directed traffic beautifully. Pitt had spacing, took great shots and made 52 percent of them, and had a combined 18 assists with just seven turnovers. Meanwhile, Maryland took horrible shots, had just eight assists -- no individual had more than 2! -- with 13 turnovers. As a result, the Terps shot 35 percent overall and jacked up 25 3-pointers, many of them ill-advised. I've been harping all year about the Terps lacking, and badly needing, a true point guard and the Pitt game was a textbook illustration of the contrast between having a good floor general and not having one at all. I'm not even sure who the point guard is anymore. So my question for you, Pete, is: Who is the point guard? Because I didn't notice one on the court in Pittsburgh on Monday. 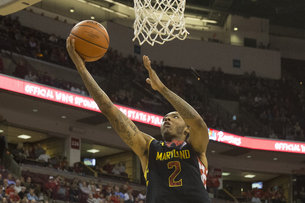 Doug Newton takes a look at the tape of Maryland's young guard.

Pete: It has to be Roddy Peters. I know you are very particular when it comes to your definition of a point guard, but the fact of the matter is that the game's changing. Peters may not be a true point guard by the old school definition of the term, but he's certainly more of one than Seth Allen (who I would also classify in the position due to his ball-handling skills and his role in the offense). The Georgia Tech game, for me, answered any and all questions about Peters's place as the team's point guard. He showed his usual ability to drive to the hoop plus an increased awareness of the players around him, finishing with five assists and zero turnovers.

FlaTerp: Fair enough, but I just can't shake some of his early season reckless drives and circus shots out of my head. When they work out, he looks like a superstar scorer in the making. When they don't, he looks like a freshman who shouldn't be playing point guard in the ACC, at least not yet. I'd argue the latter was the case against Pitt. Get him off the ball and let him hone his skills at beating people off the dribble and attacking the basket. He can do that right now.

Pete: I think much of the problem has to do with Maryland's big men, who have terrible hands and aren't very reliable when passing the ball inside. Charles Mitchell, who certainly has better hands than Shaq Cleare (sorry, Jon Graham, but you don't make the cut when talking about potential offensive weapons), has shown a complete unwillingness to pass the ball back out, taking wild shots whenever he gets the ball inside. Peters surely has his freshman struggles, but if he had some capable big men, he'd look more like the true point guard you're looking for. 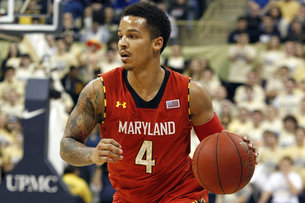 Brendan says the guard's stock is rising while Mark Turgeon's is falling.

FlaTerp: OK, but if Peters is the point guard, then the whole "but the Terps are missing their point guard" narrative for this year's bad start is out the window. Also, if I'm going to concede to you that Peters is the point guard, can you then concede to me that Seth is the best shooting guard? Let's shift Dez to the 3 and make him a point forward -- he plays a lot of point anyway. You know, It feels like these puzzle pieces aren't really fitting together no matter how we arrange them. Another example: Jake Layman and Evan Smotrycz seem completely redundant right now. Maybe only one of them should start. How about Peters, Allen, Dez, Smo and Shaq as the starting five? It's certainly a quicker unit, and maybe Maryland will get away from the 3-pointer-or-bust mentality that led to an 8-for-25 night beyond the arc at Pitt. Smotrycz would have to bang more and park-and-shoot less or else Mitchell rotates in. And Layman goes to the bench to earn his minutes back by playing up to his abilities, just like Nick Faust did.

Pete: To be fair, Peters is a true freshman, and so while he may be the point guard now, he wasn't necessarily the point guard then. I don't know if I'm necessarily willing to concede the Seth/Dez debate, just because I think the rotations work in such a way where you can have Allen splitting time at the 1/2 and Wells at the 2/3. To be clear, I'm not saying you're wrong, I just don't see it as a debate in which I'm willing to take sides. I do like your lineup idea, but I just have trouble putting too much value into the starting lineup when the rotations shift so frequently. I think Smotrycz at the power forward position is a bit of a problem because of his terrible play on defense, but it's just hard to see other consistent options. My vote is that's the position we should probably be talking about, not point guard.

FlaTerp: The power forward solution is easy: PG County's own Talib Zanna! Oh wait, Maryland signed Berend Weijs, Ashton Pankey, Haukur Palsson, Pe'Shon Howard, Mychal Parker and Terrell Stoglin that year instead. Can't wait til Senior Day at Comcast on March 9 - it'll be really emotional, (not) honoring all those guys. Back on topic, is it too soon to say this isn't really a rotation problem at all, but instead a roster problem? That would be a pretty grim reality, one in which this season isn't really salvageable, but hey, I'm talking to Pete Volk, TT's very own grim reaper! You're the guy who who gave us this, this and this. So, what the heck, let's take a walk down that dark, creaky staircase and into your sinister little lab of Maryland misery for a moment: Is this a Mark Turgeon problem?

Pete: I've talked about it before, but I do think Mark Turgeon's biggest failing so far as Maryland's coach has been his roster building. He's recruited at a high level, but the pieces do not quite yet fit together, and that's nearly as important if not equally important. I wouldn't go so far as to say it's not salvageable, because I do think the pieces are very good, if not necessarily a fit for each other, but rotation management is needed to mitigate some of those problems. When Seth Allen went down, Maryland was left essentially point guard-less until Roddy Peters started to develop, and that should never be the case. Evan Smotrycz and Charles Mitchell are both giant defensive liabilities (although Mitchell is improving), while Jon Graham exerts a lot of effort but isn't exactly who you want as your every-day power forward. There's no real answer there, and as for me that's the big problem right now -- unless the Terps really want to go small and do a Peters/Allen/Wells/Layman/Cleare starting five, at the expense of rebounding.

FlaTerp: Did you just say "at the expense of rebounding"? Ugh, now my head hurts. Actually, we kinda sorta just agreed on something here -- that Allen should be a starter instead of either Layman or Smotrycz, who seem to be doing similar things, similarly ineffectively. I can get on board with your small lineup, but Layman would have to hit the glass. It would actually force him to do something other than drift the perimeter and launch 3s, but that's fine. He's too good for that role anyway.

Pete: I know -- it hurt me more to type it than it did for you to read it. And hey, like you said, if it can turn Layman into something other than a(n inconsistent) shooter, I'm all for it. The Allen-as-a-starter thing I think is a little more complex, because everything Turgeon has said in the media has indicated that Allen would be starting right now if he was 100%. I fear the casualty in the starting lineup will be Peters when Allen does get to that point, but we'll have to wait and see.

FlaTerp: Wait, what? I just got done agreeing to Peters being the point guard! Now I'm just confused. I do think that whatever percentage of Allen we're seeing right now, it's a starter caliber player. And I want him shooting and slashing, not running the offense. Which brings up another pressing question: What is Maryland's offense, exactly?

Pete: That's a much, much longer (and uglier) conversation. For next time!