How to watch Maryland's second game of the season, against Old Dominion.

Maryland looks to continue their undefeated start to the season as they host the Old Dominion Monarchs Saturday afternoon in College Park. Television coverage begins at 4:00 p.m. ET on ESPNews.

Old Dominion is a transitional team, heading from the FCS to the FBS, where they will join Conference USA next season. The Monarchs are led by star quarterback Taylor Heinicke, who won the Walter Payton Award (the FCS's version of the Heisman) last season. Old Dominion lost their opener to East Carolina - their first-ever game against an FBS team - 52-38, after trailing by just four entering the final period.

Rankings and records: Neither team is ranked. This is the first-ever meeting between the two schools.

White helmets, red jerseys, and white pants. Like so: 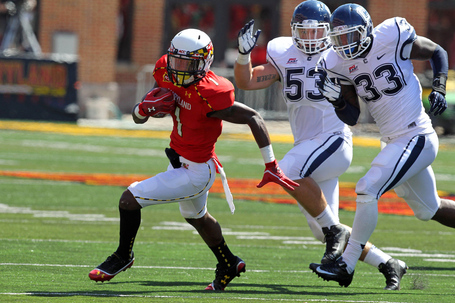 TV: ESPNews. Beth Mowins will be on play-by-play with Joey Galloway doing color.