Remember that talk about a possible indoor practice facility? Well, some possible renderings of what it might look like were spotted in the Gossett Team House today by our very own Pete Volk. 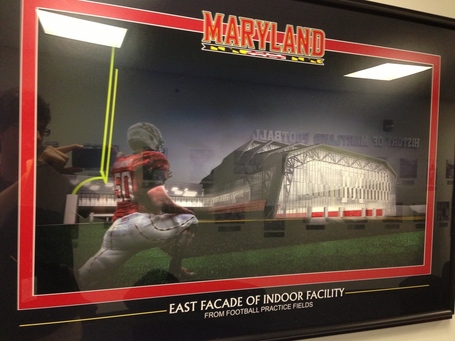 This depicts the East facade of the proposed indoor practice facility, meaning you're viewing this from where the practice fields currently reside. It looks huge and modern. 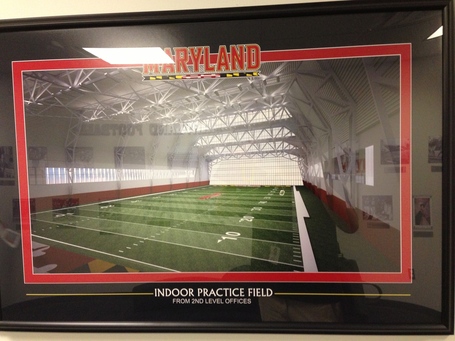 This is looking inside the indoor facility from "2nd Level Offices" which seems to imply that such a facility will not only be an indoor facility, but will house other athletic operations. 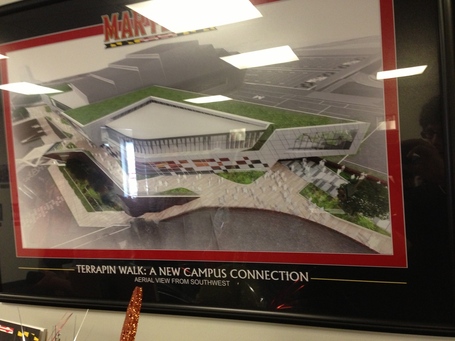 This one is called "Terrapin Walk: A New Campus Connection." The exact location of this isn't know, but it could be next to the indoor facility. There appear to be practice fields for football behind it and the indoor facility next to it, but it appears the exact location of both buildings hasn't been decided; these are simply renderings of what it could look like in certain areas on campus. We'll have more later today on possible locations. 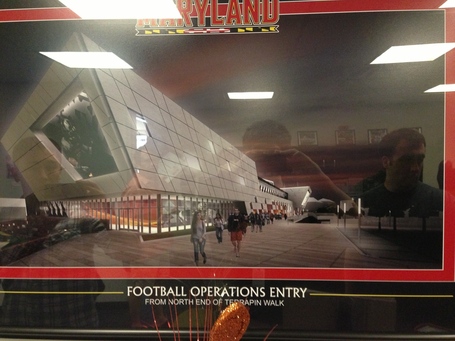 Here we see what is described as the "Football Operations Entry", from the "North end of Terrapin Walk." Where exactly this lies is uncertain. Would this replace Gossett? Is this part of the indoor facility or the other proposed building?

Again, these are just renderings Pete spotted today handing on the wall. We haven't heard anything official about them. But if something of this magnitude came to fruition, it would be a game changer for Maryland football and athletics. There are still a lot of questions (when? where? how much?), but for now, we can marvel in this dream big vision of what an indoor facility might look like at Maryland.