The starting receiver is not listed on the latest depth chart.

No. 25 Maryland has released their depth chart ahead of their clash with No. 8 Florida State, with just one change for the Terps.

Tyrek Cheeseboro is back from injury, pushing Taivon Jacobs off the depth chart. Cheeseboro slots behind Malcolm Culmer at one of the two outside receiver positions.

That also means that starter Nigel King is still out with an injury suffered in the win against Connecticut, and it is safe to assume he will not play against Florida State.

King caught three passes for 52 yards and a score before his injury this season, and had nine receptions for 125 yards and a touchdown last year. Cheeseboro has yet to catch a pass in his career with the Terrapins, but the former three-star recruit has made an impact on special teams. Last year, he made eleven tackles and forced a fumble with the unit. 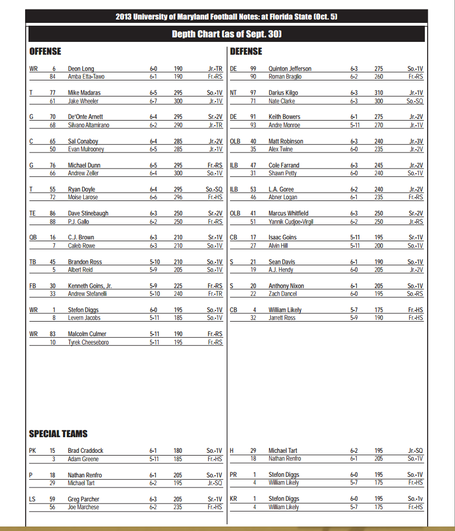