Share All sharing options for: Maryland uniform watch: Terps will have new duds against West Virginia

Our suspicions have been proven correct - Maryland football will unveil their new football uniforms Saturday, September 21, against West Virginia.

The news comes from a mysterious site set up by Under Armour, where you can sign up for updates about the Terrapins' new gear.

Here's what it looks like on Under Armour's site, complete with flag action and Maryland pride references: 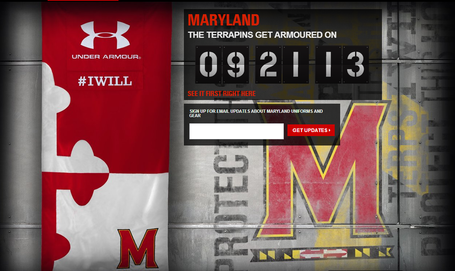 The Terrapins caught the attention of the football world in their 2011 opener against Miami with their Maryland Pride uniforms - state flag-themed gear that saw a black version later that year.

Maryland's contest against West Virginia will take place at M&T Bank Stadium in Baltimore - the home of the Ravens - and will likely be broadcast on national television. Every time a new uniform has been released, the buzz from the media and recruits has been noticeable.

Any guesses on what the new uniforms will look like?