After much speculation, guessing and a few sneak peeks, Maryland fans were finally able to see the latest version of Maryland Pride uniforms. And they are awesome.

After weeks of speculation, mockup sketches, and lots of teasers, Under Armour and the University of Maryland football team officially unveiled the latest version of the Maryland Pride uniform Thursday evening at an event in Baltimore. The new threads are, in a word, amazing:

One more picture of the uniforms. Then I'm going to go do normal things. pic.twitter.com/kvfqaxWGDt

The highlight and missing piece of the uniform puzzle, which was kept under lock and key, is the new helmet, which is the real wow factor of the entire ensemble. Hand-painted, they are designed to look like a billowing flag, and certainly have the unique factor down pat.

Here's a closer look at the helmets, from an Under Armour video. 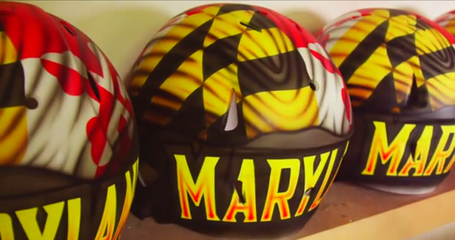 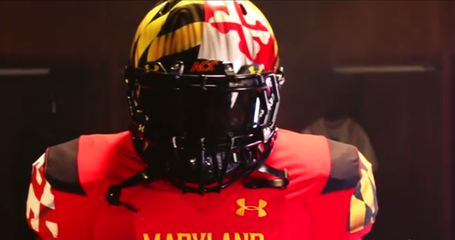 Here is that video, of the helmets being painted.

Designing a uniform in which 90% of the fabric consists of a bright color like red is hard and can easily result in someone looking like they belong on Sesame Street rather than the gridiron. But Under Armour did a nice job balancing out the red with a subtle homage to the black and gold aspects of the state flag. Together with the new helmet, Maryland has another flashy look that is sure to grab the attention of recruits (several of which will be attending Saturday's game), the Terrapin fan base, while providing them with additional exposure nationally.

Maryland's athletic department has been advertising and marketing this game as the Border Battle in Baltimore, telling fans we have to "Protect Our State."

They now have their new Armour for battle. The only thing left to do is beat WVU.

Next Up In College Football